A few tips for storing your winter squash

I wrote earlier this year about the woodchuck that wreaked havoc on my winter squash. Despite the critter’s ravages, and thanks in part to an exceptionally mild fall so far, it turns out I will …

A few tips for storing your winter squash 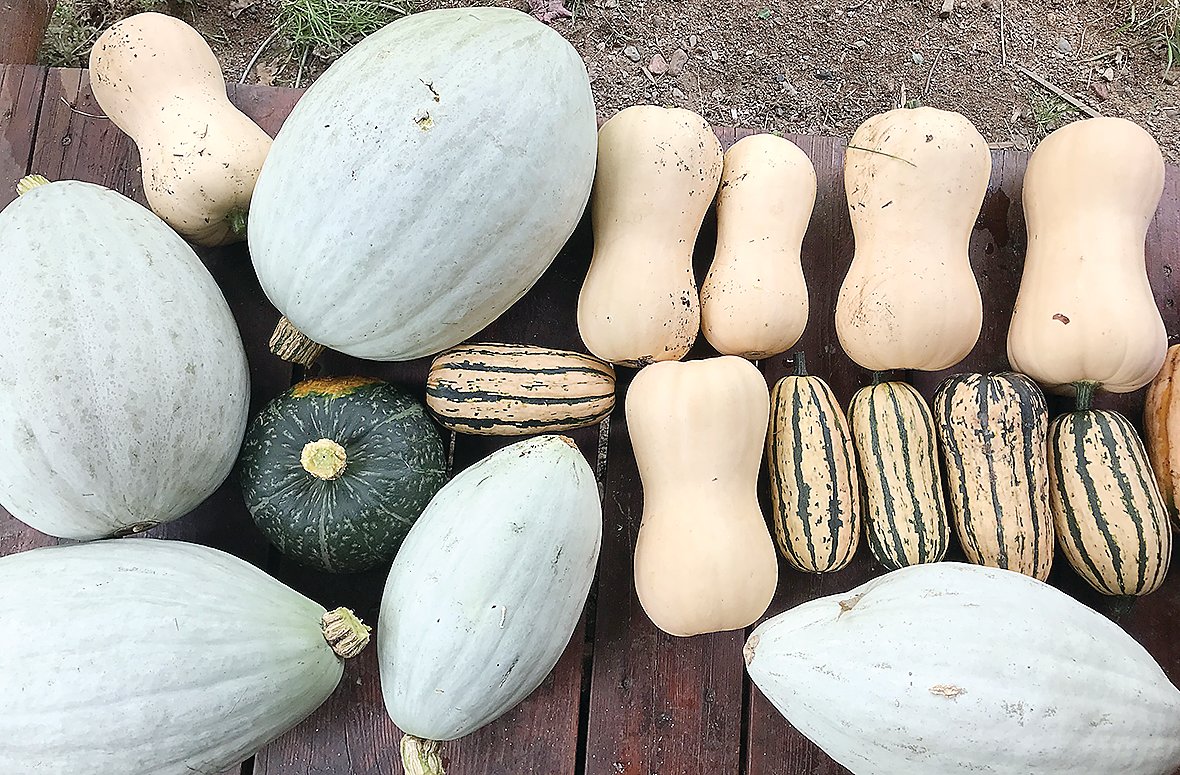 A nice selection of winter squash curing in the sun last year, including Hopi gray squash (the big ones), delicata (with green stripes), butternut, and a single kabocha squash. Our crop this year will be somewhat diminished due to drought and the havoc wreaked by a devouring woodchuck.
M. Helmberger
Posted Wednesday, October 6, 2021 5:43 pm

I wrote earlier this year about the woodchuck that wreaked havoc on my winter squash. Despite the critter’s ravages, and thanks in part to an exceptionally mild fall so far, it turns out I will have at least a mediocre crop of winter squash to store this year.
As I’ve written before, it’s tough to beat winter squash in my mind. It’s great to eat, it’s amazingly versatile, and it’s packed full of all kinds of nutrients. And, of course, it stores for months without much effort. When I think of all the time that my wife Jodi spends over the kitchen stove each fall, putting up tomato sauce, and pickling beets, cucumbers, and beans, the ease with which we can put up winter squash is remarkable
Yet, while it’s easy, there are steps you need to take if you want your cache of squash to hold out until it’s time to plant next year’s crop in the spring. We’ve learned the hard way a few times, when improper preparation turned what are normally months-long keepers into moldy messes come January. And given that this year’s crop is going to be lighter than usual, I read up on some of the tricks to ensure we don’t lose any of our crop this year. Thanks in advance to the blog Growfully and The Guardian newspaper for information for these squash storage tips.
 Tip number one is to leave a small portion of the squash’s stem intact on the fruit. An inch or two is all you need. If it breaks off, it’s an entryway for rot to set in, so keep such a squash close to the kitchen to use no later than Thanksgiving.
 Tip number two is to cure your squash in the sunshine for a week to ten days to ensure the rind has a chance to harden. A squash’s rind is what enables it to keep for months at a time. Some squashes, like zucchini or other summer squash, lack the tough rind of a winter squash, which is why they’ll only keep for days or a couple weeks at the most in the fridge. Yet, even with winter squash, the rind is often soft right after picking. You can test it with your fingernail. If it digs in, leaving a noticeable depression outline of your nail, it will need curing. After a week in a sunny spot, the rind should toughen, and you’ll barely be able to nick it with your nail. You’ll want to turn the squash a time or two to make sure all sides get their time in the sun.
 Tip number three is to wipe down the squash with a weak vinegar solution (like four parts water to one part white vinegar), to kill off the mold spores and bacteria on the outside rind. Some gardeners also use a very weak solution of bleach, which will do the same thing.
 Tip number four is to use newspaper to separate the squash where you plan to store them. Squash prefer a dry location, preferably between 55 and 60 degrees, with enough air space around each of them so they aren’t touching each other.
Be cautious about putting them in a back room with indirect heat, that might get too cool when the temps hit minus 30 or 40 outside. Squash don’t like temperatures under 50 degrees and be especially careful about placing them near the floor, where the temperatures could be even colder depending on your situation. If you’re lucky enough to have a root cellar, use it for your root crops, as the name suggests. Your squash won’t last nearly as long in the cool and damp conditions typically found there.
 Tip number five is to enjoy your winter squash on a regular basis. Don’t store them in some out-of-the-way place where you’ll forget about them. And don’t think of squash as merely a side dish. There are few things better on a winter’s evening than a meal of stuffed delicata squash, or a spicy butternut squash soup as the centerpiece for a hearty meal. And don’t forget the leftovers. If anything, squash seems to taste even better the second time around.
So, take the time to cure and store your winter squash properly and you’ll be able to enjoy great eating for months to come.