Christina Hujanen looks to the future after successful treatment

REGIONAL— What had once seemed a nightmare is looking much more like a dream come true for Christina Hujanen, who is contemplating a future once again after a months-long battle with cancer. …

Christina Hujanen looks to the future after successful treatment 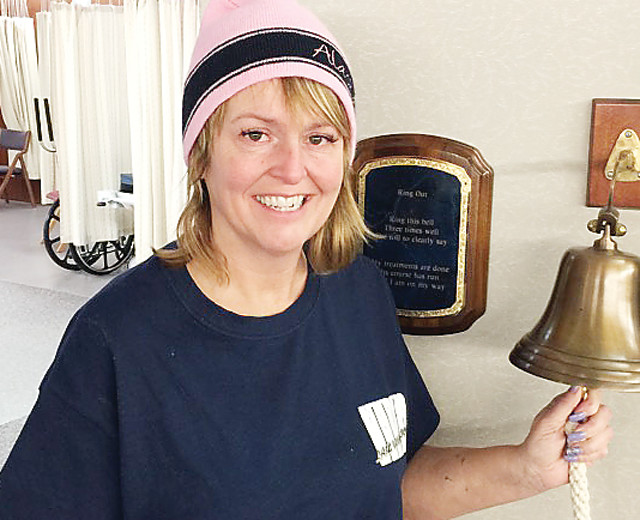 REGIONAL— What had once seemed a nightmare is looking much more like a dream come true for Christina Hujanen, who is contemplating a future once again after a months-long battle with cancer.

Doctors at the Mayo Clinic informed Christina this week that after successful surgery for her esophageal and stomach cancer earlier this month, she is all but cancer-free. Some residual cancer cells remain in two lymph nodes, she said, but doctors are now confident that follow-up chemotherapy will leave her free of the scourge that shook her life to its very core last fall.

Christina, who returned home this week to the Iron Range, said she’s now looking forward to getting off her feeding tube and being able to “eat like a regular person," something she’s been unable to do for weeks.

Christina said her experience has offered a flood of mixed emotions, from fear and sadness to joy and incredible gratitude for the enormous amount of support she’s received from family and friends through her ordeal. “I know what’s gotten me through this is all the support I’ve gotten from all over the world,” she said. “I knew I had family and friends counting on me to get through this. That’s what kept me strong.”

Among those constantly at her side was her eldest son, Justin Grotberg, who spent weeks with her in Rochester while she underwent her treatment. Justin was there this week when she got the incredible news from doctors following her latest tests. Justin said the news came like a wave of relief.

“We feel like we’ve gotten a second chance with mom,” he said.

For months, a second chance seemed like a distant dream. When doctors at the Mayo Clinic first examined Christina late last October, the diagnosis was grim— inoperable, stage four cancer that had spread to multiple organs of her body. Even so, her doctors devised a treatment plan, including intense chemotherapy and radiation. At best, doctors hoped it might buy her some time. Chances of defeating the advanced cancer were slim.

But friends and family all knew Christina, a longtime community activist and two-time candidate for county commissioner, as a tireless fighter. She said she would give it everything she had, and pledged to come out on top.

Yet getting from diagnosis to potential cure meant running a gauntlet from which very few patients with a similar diagnosis ever emerge. After weeks of grueling treatment, which left her ill much of the time, doctors gave her a month off to recover at home. Then came the make or break week in early February, when Christina returned to Mayo for tests to determine whether the therapy had worked.

They were the toughest days of all, because Christina knew that the results would determine whether or not she could get potentially life-saving surgery, or if there was nothing more that the doctors could do. “This is so overwhelming and scary,” Christina posted on Facebook at the time.

By Thursday of that week, the test results were in, and doctors were amazed at the progress she had made. They concluded she qualified for surgery and scheduled the 12-hour procedure for the next day.

But even as doctors opened her up, they still had doubts about whether they would continue. Sometimes, even though tests show progress, once doctors examine patients on the operating table, they find that the cancer is still there.

Christina said she knew as doctors administered her anesthesia that there was a good chance she’d wake up and be told that they had cancelled the procedure.

The night before the surgery, there were decisions to be made and papers to be signed. Complications in a surgery of the magnitude Christina was going to face are not uncommon and with the advice of doctors, Christina signed over her power of attorney to Justin.

While the prospect that his mother might not pull through had been in Justin’s mind for months, he said signing that paper that night was the moment the possibility really hit home. “It got very real at that point,” recalls Justin. “There were a lot of emotions that night for all of us.”

When Christina emerged from the anesthesia the next day, her first question was whether doctors had actually done the surgery, which involved removing her esophagus and stomach and recreating them from other parts of her body.

The surgery had gone forward, and appeared to be a complete success, although complications set in and she ended up with additional surgeries over the next several days.

Two weeks later, Christina said she’s still in a lot of pain, but is incredibly grateful she’s gotten this far. She’s looking forward to spending time at home before returning to Mayo for her follow-up therapy. And for the first time she’s thinking about the future with a sense of hope.

Justin says the whole experience has been more than he could have ever imagined. “It’s been quite a ride,” he said, saying that he still can’t believe the news that doctors delivered this week.

“It definitely caught me off-guard, how much of a miracle this has been.”