ELY – A sunny sky, cool temperatures and west winds greeted participants and their fans at the 2021 Ely Marathon races last weekend that returned after a year off in 2020 because of the … 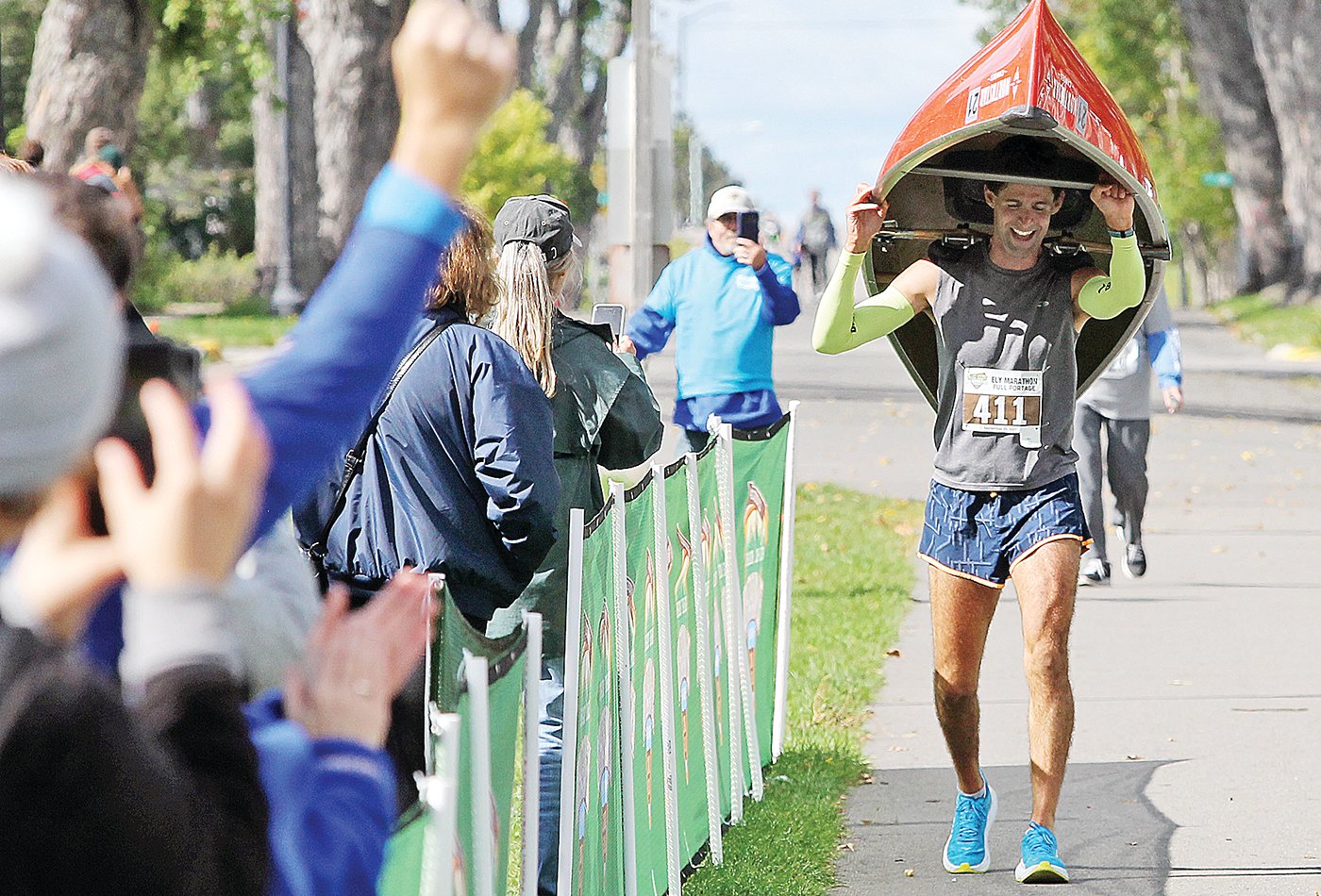 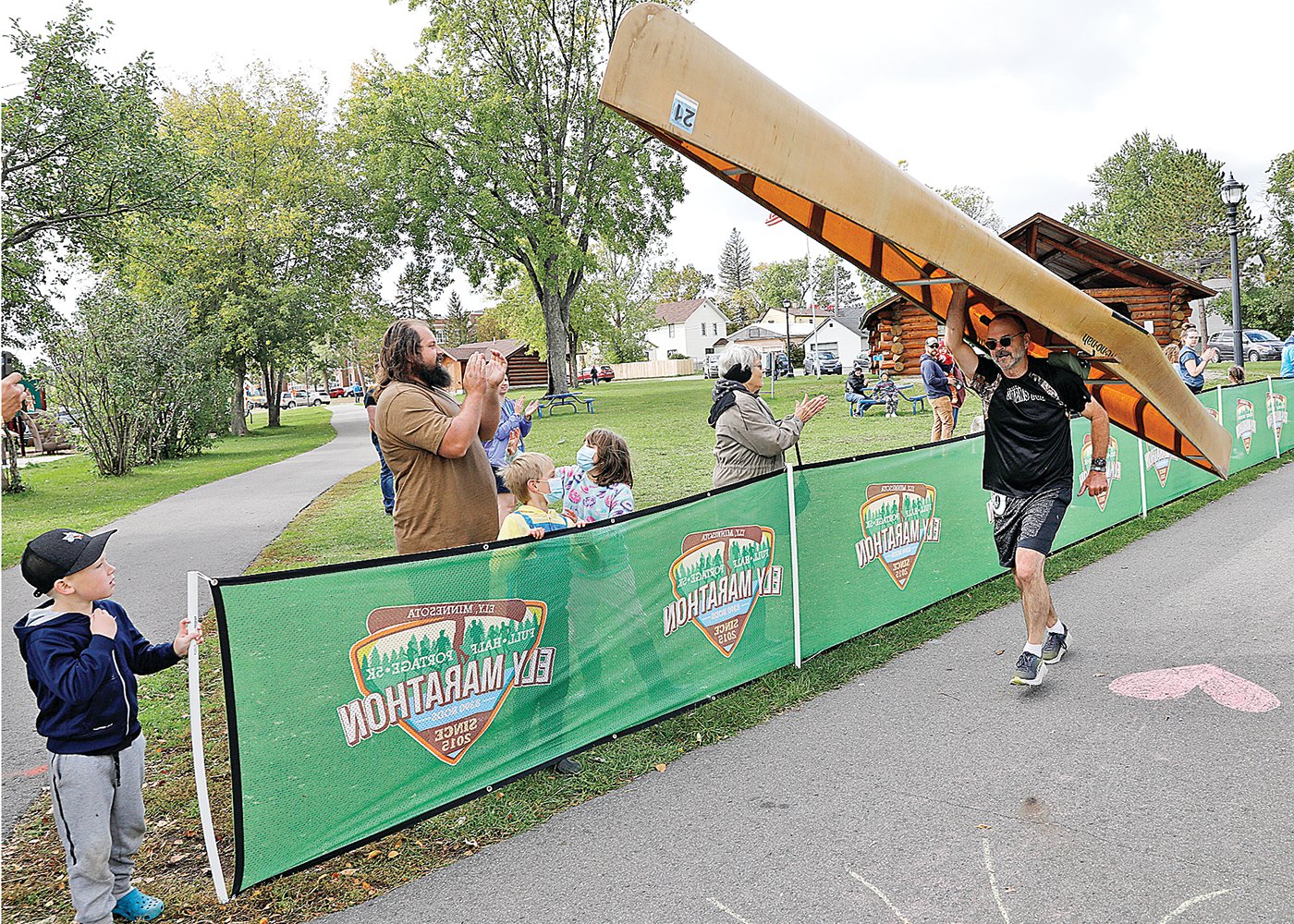 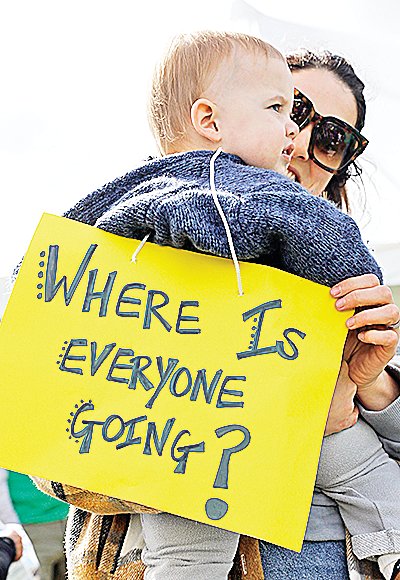 Jensen Sinclair, 14 months, with mom, Angie, wondered where all the runners were headed to.
K. Vandervort 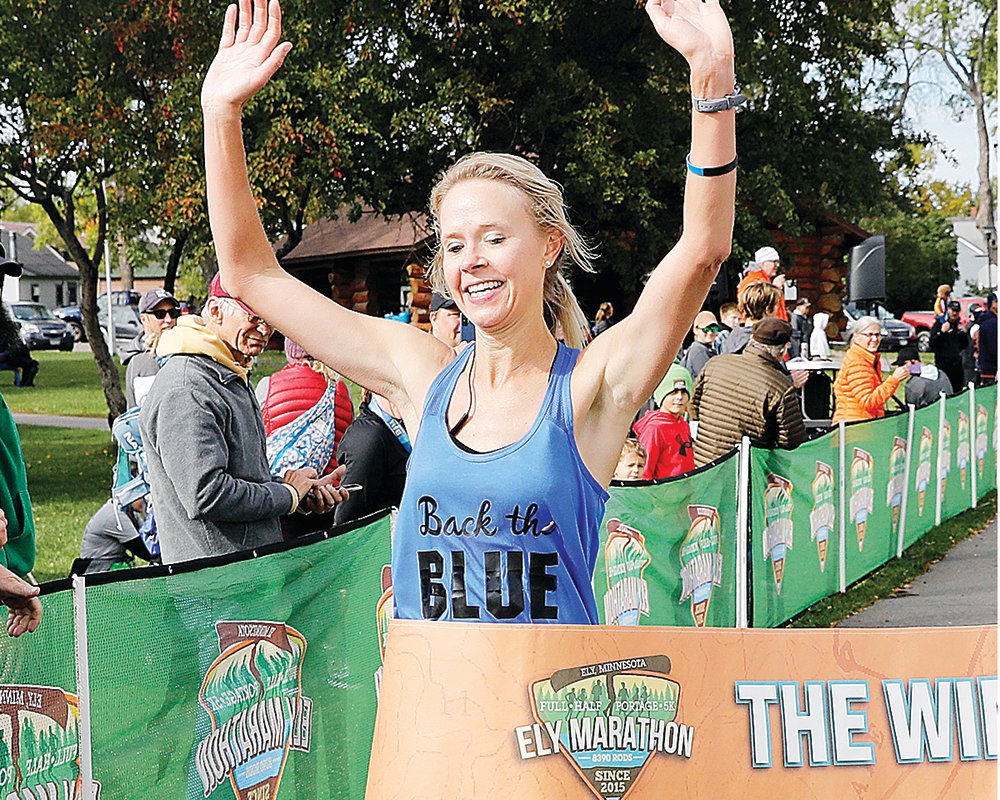 ELY – A sunny sky, cool temperatures and west winds greeted participants and their fans at the 2021 Ely Marathon races last weekend that returned after a year off in 2020 because of the coronavirus.
“We were really happy with the turnout,” said organizer Wendy Lindsay. “We had lots more registrations than previous years. Race day went great and people were having a great time.”
The premier event of this distance-running celebration at the end of the road, the Ely Full Marathon (26.2 miles) Portage Division, took center stage again this year. The 2019 winner, Anthony Peter, 41, of Mounds View, broke his own course record. He finished in 4:23.20, shattering his old record of 5:00.01. Peter won a custom Northstar canoe for his efforts.
Three others of the five finishers also broke the five-hour mark. Nick Gardner, of Ely, came in second with a time of 4:32.03. Jacob Bendel, of Proctor, was third in 4:32.30. Ben Gardner, also of Ely, was fourth in 4:53.15. Brian Stenholm, of Olivia, finished in 6:30.40.
“This was the first official race of its kind and is registered with the Guinness Book of World Records,” Lindsay added.
In the Half-Marathon Portage event, there were four finishers. Craig Sinclair, of Waconia, was first with a time of 3:03.24, followed by Marc Barringer, of St. Claire Shores, Mich., 4:03.52, Kristy Goetsch, of Merrill, Wis., 4:42.18, and Claire Butchkoski, of Decorah, Iowa, 5:12.59.
In the Ely Marathon (a Boston Marathon qualifier event), Andrew McNamara, of Goodhue, repeated as winner with a time of 3:09.02. He finished the 2019 race in 2:52.13. Lisa Smith, of Hibbing, a repeat half marathon winner here, came in second in the full marathon this year with a time of 3:10.46.
“There were 125 full marathon finishers this year; that’s the most ever,” Lindsay said.
The Boundary Waters Half Marathon had 314 finishers. The winner, Brad Ryland, of Minneapolis, broke the course record with a posted a time of 1:16.56. Jamie Blumentritt, also of Minneapolis, was the first woman to cross the finish line, in ninth with a time of 1:31.15.
The Ely Outfitting Co. repeated as Full Portage Marathon Relay Team winners with a time of 5:18.21. They won in 2019 with a time of 5:08 10. The only other team this year, Middle Aged Midriffs, from Iowa, finished in 5:28.11.
In the Half Portage Marathon Relay Team race, Team Hubbell City, from Minneapolis, won in 3:09.26. Four teams participated in that event this year.
The 1.2-mile kidsmarathon, coined the Dorothy Molter Root Beer Run, included area youth who ran 25 miles prior to race day and finished out the last 1.2 miles of the marathon route to reach the official marathon finish line.  Wyatt Devine was the boys winner with a time of 8:32, followed closely behind by girls winner Mattie Lindsay in 8:39. There were 51 kid racers this year.
“We also broke a record this year with 356 volunteers,” Lindsay said. “That is huge for Ely. It is so nice to see everyone come together to make this a community event.”
The 2022 Ely Marathon is scheduled for Sept 29.