REGIONAL— A proposal to introduce elk in northeastern Minnesota proved a hot topic at the Oct. 22 St. Louis County Board meeting held at McDavitt Town Hall.

At issue was a plan, promoted by the … 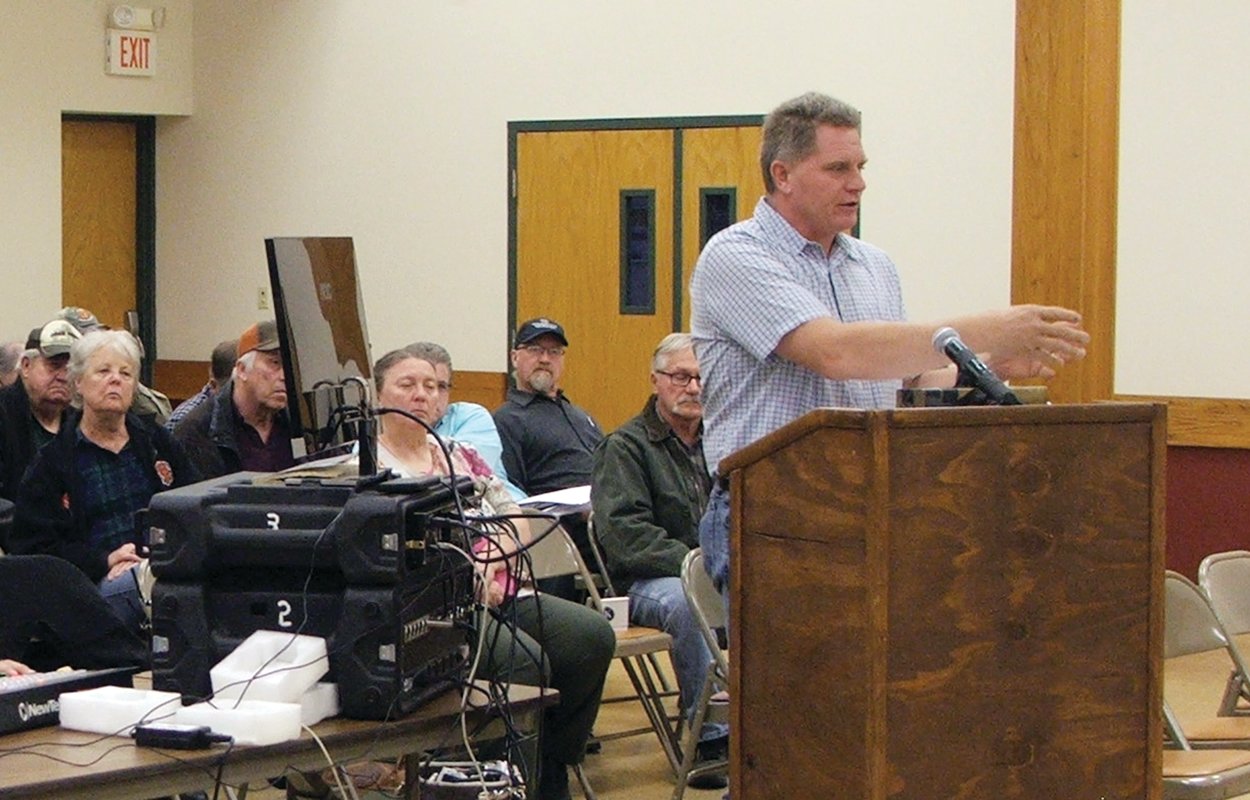 REGIONAL— A proposal to introduce elk in northeastern Minnesota proved a hot topic at the Oct. 22 St. Louis County Board meeting held at McDavitt Town Hall.

At issue was a plan, promoted by the state and the Fond du Lac Band, to introduce elk into parts of the Arrowhead. A number of residents opposed to the idea voiced their concerns.

In August, a group of researchers released the results of a public opinion survey on the elk introduction, along with a habitat study of three potential introduction zones, the largest located in the Cloquet Valley State Forest. That’s the zone that had some McDavitt residents concerned. The Cloquet Valley State Forest, a 366,000-acre area located about 20 miles north of Duluth, was identified as having suitable habitat in the report. The forest, which is owned primarily by the county and the state, is managed by the Department of Natural Resources and is currently used for a multitude of purposes, including timber harvesting, hunting, fishing, trapping, ATV and snowmobile riding, hiking, camping, and wildlife management.

McDavitt Township lies about six miles west of the Cloquet Valley Forest. Many of those who spoke to the county board were area farmers worried about the effects that elk could have on their nearby farms.

“You never really consulted with any of the people that [the plan] affects, and it affects the area farmers,” said Tony Zupancich, representing the St. Louis County Livestock Association. “We just went through a deal with [bovine tuberculosis] TB that was started up in the northwest corner [of the state] with elk, and our whole state was quarantined for a number of years. We couldn’t ship any cattle out of state. Over the years we were able to progressively eliminate all of the TB through testing and … elimination of herds, so this will affect the area farmers greatly.”

Farmer Tom Schroeder had other concerns as well. “Right now, very few of the farmers have to carry crop insurance, but if you bring the elk in, and they start eating your hay fields … and wrecking your fences, you’ll have to carry crop insurance to get reimbursed,” Schroeder added that this meant farmers would essentially be subsidizing the few people who would be able to hunt the elk.

Another farmer, Jim Takala, shared that concern. “We [grow] about 1,500 acres of high-quality…alfalfa for our dairy cattle,” said Takala, which totals about 5,000 bales. “Those are big draws [for elk], because they’ve got to eat something.”

Takala owns one of the last dairy farms in St. Louis County, with 12 employees and a herd of nearly 900 head (including dairy cows, heifers and beef cattle).

Takala also cited concerns about TB, and noted that he had just sent a load of cattle to Saskatchewan. “TB would just shut that right down,” he said. “Canada [is] a good market for us. It’s probably $300 a head more than we could get within the state of Minnesota.”

St. Louis County Extension Educator Troy Salzer concurred, “We saw approximately a 30-cent-per-pound decline in our beef prices when that [TB outbreak] occurred. It took us multiple years to get back the TB-Free status.”

Concerns over livestock weren’t the only ones raised at the meeting. Scott Dane, representing the Associated Contract Truckers and Loggers of Minnesota, said he opposed the elk project because he feared it would place additional restrictions on the logging industry. Dane noted that loggers were already prohibited from operating on certain roads during turtle breeding season, and he said “there’s been a lot of talk about” restricting logging due to its impact on the long-eared bat as well. Dane thought elk would have a similar effect. “It’s just going to be a matter of time before the Friends of Something-or-Other or Save This-or-That uses the elk as another means to stop logging operations.”

A total of 14 citizens addressed the board, all of them opposed to introducing elk to the Cloquet Valley State Forest. During the board’s Committee of the Whole meeting which followed, Commissioner Keith Nelson (who represents McDavitt) said he intended to introduce a resolution in November which would declare “a moratorium on the introduction of cervids [members of the deer family] into St. Louis County.”

While a number of speakers raised concerns about the spread of TB, Minnesota’s TB outbreak does not appear to have originated with elk.

Northwest Minnesota does have a small elk population, but genetic testing of the TB strain conducted in 2015 strongly suggested that the TB originated with a cow imported from Mexico or the southwestern United States and spread to the wild deer population from there. Though the possibility of elk carrying TB should not be minimized, the disease was never identified within Minnesota’s herd.

Minnesota’s bovine TB problems began in 2005, when a beef cow in the northwestern part of the state was found to have the disease. Testing revealed that more cows within the herd had the disease, and it was later confirmed that it had spread to four other nearby herds as well as the wild whitetail deer population. Based on these findings, the entire state lost its “Bovine TB-Free” rating, which led to new trade restrictions and greatly increased the testing requirements for cattle.

By 2009, a total of 12 cattle herds had to be destroyed after TB infections were confirmed, all in a four-county region in northwest Minnesota. A significant portion of northwest Minnesota’s deer population was also killed and tested in an effort to control the outbreak. Of 9,783 deer killed between 2005 and 2010, 27 had TB. The last deer to be found infected with TB was killed in November 2009. Minnesota regained its TB-Free accreditation in 2011.

The story of bovine TB in Minnesota is a cautionary and expensive tale. According to a 2011 report, the U.S. Department of Agriculture spent $70 million, Minnesota’s Board of Animal Health spent $12.5 million and the DNR spent $3.5 million in order to control the disease.

“They are a native species in Minnesota that once numbered in the thousands, and now numbers maybe 130, confined to two small groups out in northwest Minnesota,” said Schrage. “So it’s bringing back a native species. I think it’s also preparing to adapt to climate change. Northern Minnesota is kind of where things change from boreal forest wildlife to southern wildlife, and with climate change that line is probably going to move north, out of Minnesota.” Schrage said that elk are adaptable to warmer conditions. “Elk will do just fine with climate change,” he said.

Schrage also noted that hunters would be able to hunt the elk eventually. “I tell people it’s not likely to happen in a couple years. It’s likely to take a long time to grow up a herd to where there’s enough animals to have a sustainable hunting season. But, yeah, that’s the idea, is someday there’d be enough animals for some hunting.”

As for farmers’ concerns about elk damaging their property—Schrage said it’s one reason there aren’t more elk in northwestern Minnesota. “But, you know, the Cloquet Valley State Forest doesn’t have very much for farms, other than hay pasture and limited livestock operations. Elk do like hay bales, but stored forage is really easy to protect against elk. You put it in a barn or you put a fence around it—and the state helps providing money for farmers that want to do things like that.”

According to Schrage, farmers who suffered losses due to elk can also file a claim with the state for compensation.

While Schrage also acknowledged that elk could carry TB, he said he considered chronic wasting disease (CWD) to be a more serious concern. “That’s something that elk and moose and deer can all get, and that’s the disease we have to be most concerned about, if we’re going to undertake an effort like this … making sure we’re not moving infected elk.”

It is unclear how much support Commissioner Nelson’s resolution opposing elk introduction will garner. He introduced a similar resolution in August, but withdrew it from the agenda. Nelson’s case may be complicated by the fact that, in 2015, the St. Louis County Land Department, along with Pine County and Carlton County, gave the go-ahead to the state and Fond du Lac Band to undertake the elk habitat study and issue a public opinion survey pertaining to the project.

Nevertheless, Mike Schrage told me that the county’s 2015 letter did not signify that the county wanted the project implemented. “The way I pitched it to the counties when we initiated this study and were looking for support back in 2015, is at this point we’re studying it to see if it’s a workable idea. Do we have the habitat? Do we have the public support? We have not made a decision to put elk here. We’re only looking to see if it’s a workable idea. We’re not asking any county to say, ‘Yes, we want elk’ or ‘No, we don’t.’ Just, you know, ‘Hey, we support doing a study.’ And that’s [all] the counties agreed to.”

For the project to proceed, funding would need to be secured. An even greater obstacle, as demonstrated by the strong public opposition represented at the McDavitt Town Hall meeting, may be the acquisition of political support.