REGIONAL— The Department of Natural Resources has set new population goals for whitetail deer for portions of the region, and the new targets call for increases across the board. It’s all …

An eight-point buck in velvet was working the shore of the Pike River Flowage, near Tower, recently.
M. Helmberger 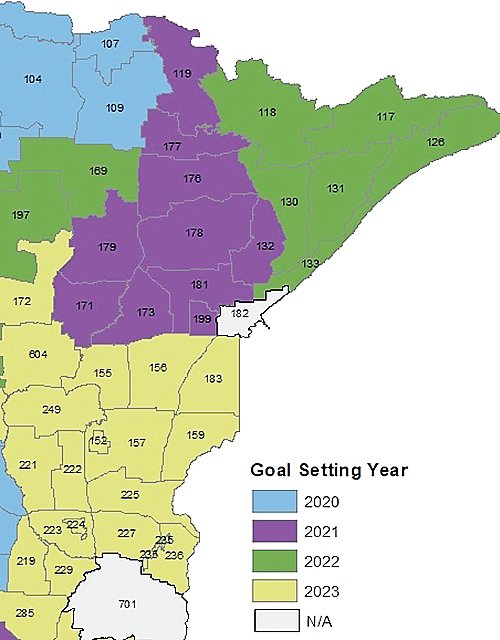 The area in purple is part of the latest deer goal-setting. The area in green is slated for goal -setting in 2022.
DNR
Previous Next
Posted Wednesday, August 4, 2021 5:17 pm

REGIONAL— The Department of Natural Resources has set new population goals for whitetail deer for portions of the region, and the new targets call for increases across the board.
It’s all part of a statewide goal-setting effort that focused this year on three regions, among them what’s known as the Border Uplands/St. Louis Moraines management block. The block includes several deer permit areas (DPAs) in northern and central St. Louis County, including 119, 176, 177, and 178.
The new goals call for increases in the deer population in all four of those DPAs, ranging from a 75-percent increase in 119 to 25-percent increases in 177 and 178. DPA 176 would see a 50-percent increase under the plan.
The new goals could well lead to tighter bag limits in the near-term for hunters in these areas. DNR wildlife managers use the goals each year when setting bag limits and when deer populations remain below target, hunting regulations, including allowable harvest, are typically more conservative. The DNR is expected to announce the bag limits for permit areas across the state later this month. Licenses for the upcoming deer seasons, including archery, regular firearms, muzzleloader, and the special youth hunt are now available online or wherever such licenses are sold.
The goals set for the local DPAs appear to reflect the attitudes expressed by hunters more than landowners. As part of the goal setting, the DNR sent surveys out to roughly 500 hunters who had previously hunted in a given DPA, along with approximately 425 landowners. While results varied considerably by DPA, landowners expressed considerably less enthusiasm for higher deer numbers than did hunters.
Indeed, in some permit areas, like 177, where the goal calls for a 25-percent increase in deer numbers, 52 percent of landowners indicated they wanted the deer herd to remain the same, while an additional 11 percent indicated they wanted a reduction in deer numbers. Only 37 percent expressed support for an increase in the whitetail population.
Yet 71 percent of deer hunters in the permit area expressed an interest in seeing more deer, compared to just 25 percent who want the population to hold steady.
In permit area 176, 54 percent of landowners indicated they wanted to see deer numbers remain the same, or decline, while 46 percent expressed support for an increase. Landowners in DPA 178 expressed similar views.
In both areas, however, just over three-quarters of hunters indicated support for an increase in the deer population.
Landowners and hunters alike agreed on the need for more deer in DPA 119, located in far northern St. Louis County. The deer herd has been well below previously-set goals for some time, limiting hunters to bucks only for the past several years. Wildlife managers indicate that a decline in quality winter habitat, combined with some harsher-than-average winters over the past several years, and ongoing wolf predation, has kept deer from recovering in that permit area.
The survey also revealed a significant level of dissatisfaction among hunters, particularly from hunters in permit areas where deer numbers are known to be well below goal. In DPA 119, 69 percent of hunter respondents indicated they were dissatisfied with the number of legal bucks they were seeing, while an additional 17 percent indicated they were somewhat dissatisfied. Hunters in DPA 176 expressed similar views, while hunters expressed somewhat more satisfaction in DPAs 177 and 178.