Another celebration planned for June 27

ELY – This week, the United States marks 50 years since the landmark Title IX antidiscrimination law was enacted. To celebrate this milestone in the Ely area, two women with notable athletic …

Another celebration planned for June 27 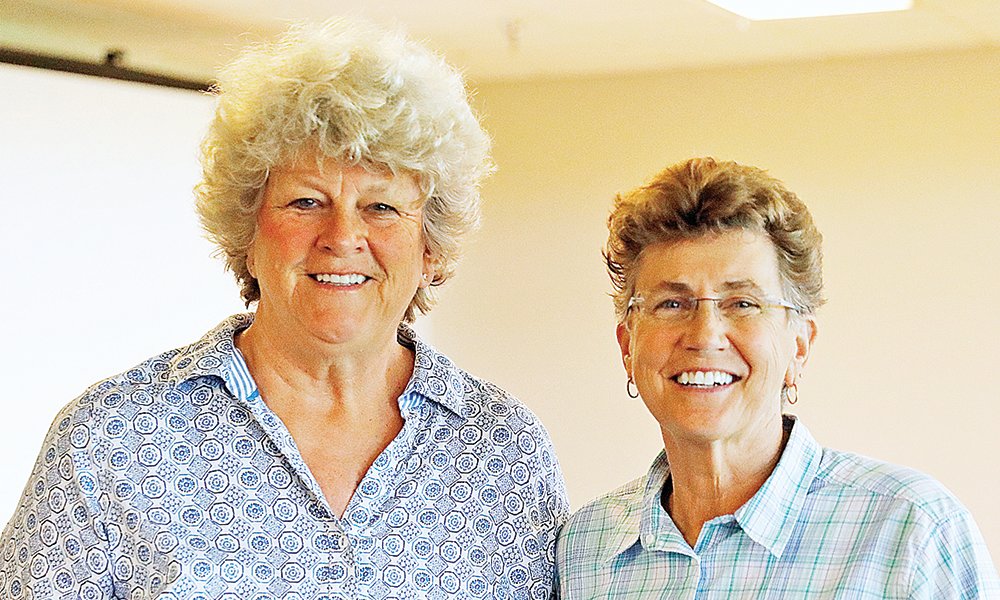 ELY – This week, the United States marks 50 years since the landmark Title IX antidiscrimination law was enacted. To celebrate this milestone in the Ely area, two women with notable athletic achievements made possible by the opportunities provided by this law spoke at a Tuesday Group gathering.
The event was sponsored by the American Association of University Women (AAUW), Ely branch. Autumn Cole, of Ely, introduced the program. She graduated from college in 1972, the year that Title IX was passed.
“I had zero opportunities for sports when I was in school,” she said.
At age 30, she and a friend decided to hike the Grand Canyon, and she started exercising to get in shape for the adventure.
“I signed up for my first triathlon after that, and got hooked on sports. Now I can’t imagine not being active,” she said.
She still competes in triathlons, cycles year-round, and swims across Miners Lake.
“I enjoy all that Ely has to offer,” Cole said.
Cole related a recent discussion with another Ely resident, Judy Klun.
“She grew up in the Chicago area, and in 1972 when Title IX was passed, she was a high school freshman. She got involved in sports, particularly track, where the girls participated in blue jean cut-off shorts and a t-shirt jersey,” Cole said. “Judy liked to throw the shot-put, but the girls were only allowed to throw the softball. And in basketball, they weren’t allowed to run the full court, but used only half the court. They could only dribble the ball three times. We’ve come a long way since then.”
Klun moved to Ely at age 24 and taught physical education.
“She went on to coach girls track, girls basketball and girls softball,” Cole said. “Judy told me she couldn’t imagine life without sports. It becomes a part of our spiritual and inner being. She said she was honored to work with all the Ely athletes over the years. Judy compared the idea of teamwork to geese flying in formation. All team members are equally important, no matter what their position.”
Deb Sunderman, who has a cabin near Ely, is a former wheelchair basketball player, Paralympian, and physical education teacher.  During college she sustained a hip injury, but after graduating Sunderman joined the Minnesota Rolling Gophers/Timberwolves of the National Wheelchair Basketball Association and was named MVP four times.
She represented the U.S. at the 1988 Paralympics where her team won the nation’s first gold medal.  In 1996, Sunderman became the first woman head coach for the USA Women’s Paralympic Games, coaching the team to a silver medal.
Sunderman noted that even though Title IX was passed in 1972, just last year, “President Joseph Biden signed an executive order to add sexual orientation and gender identity to Title IX.”
Prior to the landmark Title IX order, women’s sports were governed by the National Association of Girls and Women in Sports (NAGWS).
“The first part of their guide and official rule book was how to hold the proper cookie and bake sale,” Sunderman said. “That kind of tells it all. We had to fight for our rights. We’ve come a long way, baby, since those days of bake sales.”
In her high school, Sunderman said, the girls’basketball team took a secondary role to the boys team.
“Our season was just three or four weeks. We would play all day on a Saturday and at the end of the day, the winners would be the champion,” she said. “Our coach would have to call a timeout from time to time so we could all pat the numbers on the other girl’s jersey to keep the numbers made of black electrical tape stuck on the white t-shirts we wore.”
Sunderman said that sports has been very important to her and the kids she taught.
“More importantly, I have seen changes, from uniforms with the numbers falling off to women’s sports programs being fully funded. We still have a long way to go. Title IX is not in compliance all the way through. My hope is that we don’t have to talk about it anymore, and it just becomes a natural thing. And people know to do the right thing.”
Cynthia Haugejorde, who lives in the Twin Cities, was a freshman in high school the year Title IX was passed. After earning twelve letters in high school golf, basketball, track and volleyball, she went on to play basketball at the University of Iowa. She played on the U.S. Junior Pan American Gold Medal Team and was a member of the U.S. Olympics Trials Team.  She was selected in the first round of the Women’s Basketball League draft as the sixth pick overall and served as an assistant basketball coach for the University of Minnesota and for Penn State.
“I am a child of Title IX,” she said. “Equality has always been important to me. Title IX is about having the opportunity to step forward. It is the opportunity to step through that portal. For all those kids who played, they had to take that initial step. It wasn’t always a popular thing to play a sport that was a boys sport.”
Haugejorde added, “That glass ceiling is getting thinner. It is not as hard as it was once before. But at the same time, winning and losing are both equally important. It is important to win, but it is important to lose. That way you understand the values of what it takes to cross that line and to value yourself.”
She noted that many girls playing sports today don’t know the meaning of Title IX and what it represents.
“In a way that is good,” Haugejorde said. “In a way it is challenging. Why should they have to worry about what is equal or not. (Title IX) has been a gigantic ripple effect. We have come a long way. We have a long way to go.”

Another Title IX celebration in Ely
Another Ely-area event marking the milestone anniversary, “Title IX Through the Ages,” will take place on Monday, June 27, beginning at 6 p.m. at the Hidden Valley chalet.
Fifteen Ely girls and women, ages 6 to 81, will share their personal stories of their experiences before Title IX or how they have benefited since the passing of the law, and how this has impacted their lives.
This event is sponsored jointly by Ely EMPOWER and AAUW, Ely branch and is open to the public.

What is Title IX?
Title IX prohibits federally funded educational institutions from discriminating against students or staff based on gender. The legislation does not require identical sports, but rather equal opportunity to participate in sports and to receive comparable scholarships. It requires equal treatment when it comes to training facilities and times, equipment, coaching and any other opportunities in sports programs.
In 1972, the number of girl athletes totaled 295,000 nationwide. Now, there are more than 3.4 million girls participating in sports.
The legislation, though often thought about as relating to sports, covers the gamut of educational opportunities for both staff and students. Female teachers are no longer forced to leave employment when they marry or become pregnant. Equal access to educational opportunities is mandated so that careers such as medicine, the law, and science-related fields no longer have gender restrictions and quotas.
Since becoming law, the percentage of women between the ages of 25 and 34 with at least a bachelor’s degree has tripled.
The law also requires federally funded educational institutions to have a Title IX coordinator and requires the institution to take swift action when there are accusations of sexual harassment, sexual assault, sexual discrimination, and violations of Title IX.