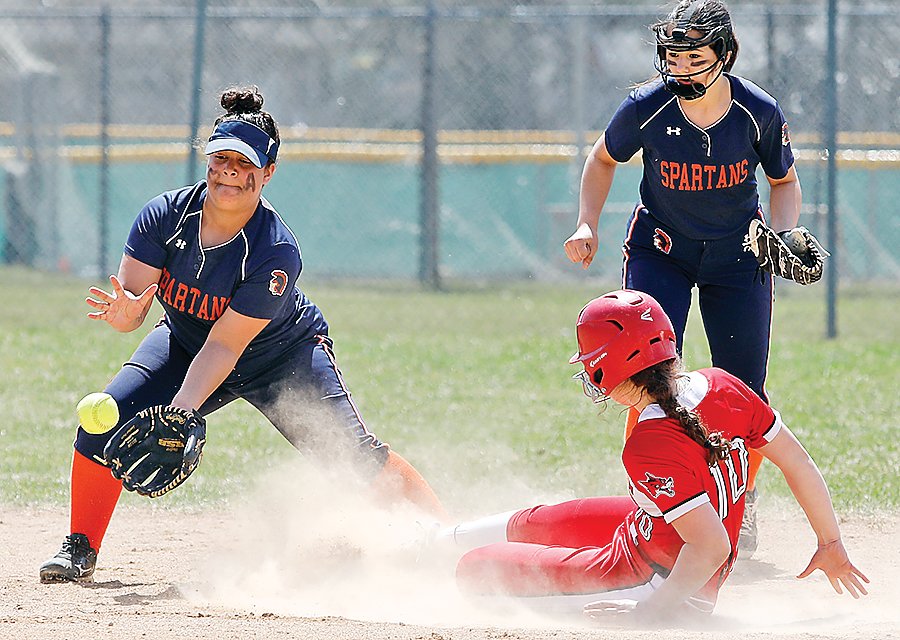 Ely’s Kate Coughlin slides safely into second base during Tuesday’s contest with the Spartans.
K. Vandervort
Posted Wednesday, May 11, 2022 5:10 pm

ELY – The Timberwolves softball team won two of three on the road late last week and brought their 6-1 record home this week where they lost to International Falls on Monday and beat Nashwauk-Keewatin on Tuesday.
The Timberwolves are sporting a 7-2-record as they look forward to back-to-back double headers this Friday and Monday.
Ely girls skipped class Tuesday afternoon to host Nashwauk-Keewatin for a rare matinee game, rescheduled because of the ongoing umpire shortage. The Timberwolves won 16-5 behind pitcher Zoe MacKenzie who is getting more time on the mound this spring as the team makes up for the delayed start to the season.
“I thought this was the best that we played as far as putting it all together, “Coach Cory Lassi said. “Zoe did a great job throwing strikes. She didn’t walk anyone. I thought we played great defense behind her.”
Ely fell behind 3-1 in the first inning, and 4-1 in the second inning, before coming alive in the third inning when Kate Coughlin hit a two-out double with bases loaded to give the Timberwolves a 6-4 advantage. “We had great at bats at the plate,” Lassi added. We were able to get timely hits with runners on base.”
Ely lost at home, 11-1, to International Falls on Monday to drop to 6-2. Neither team could put runs across the plate until the Broncos scored two in the fourth inning, and added six more runs in the sixth inning. “I thought we did a great job competing against a really good pitcher,” Lassi said. “I felt like we did a good job being aggressive at the plate and we hit the ball hard. “
At Cook County last Saturday, Ely improved to 6-1 with a 9-7 win. “We were short-handed, with four starters gone to a volleyball event,” Lassi said. “We found a way to win.”
The Timberwolves were down 6-5 going into the seventh inning, and scored four runs. “We gave up one run in the bottom of the seventh and held on for the win,” he said.
Charly Flom and Lexi Halberg led the way with two hits each, along with hits by Katrina Seliskar, Cedar Ohlhauser, and Ella Parish. “Lexi and Ella really stepped in. Between them they had three hits, two doubles and some really big at bats,” Lassi said.
The Timberwolves were down by two runs in the sixth inning and hadn’t scored since the second inning. “It looked like we were just going through the motions and I didn’t see a lot of energy,” he said. “Ella hit a ground-rule double to the fence, and Lexi came up to get a hit to score her. That was a big spark to give us some life. With those hits, it turned our batting order over to give us the top of the lineup in the seventh inning, and we rolled from there for the win.”
Senior pitcher Seliskar gave up four earned runs on 11 hits. She had three strike outs and five walks.
Ely took one on the chin last Thursday, getting blanked 13-0 at North Woods for their first loss of the season. (See separate story page B1.) The Timberwolves got four hits in the game by Kate Coughlin, Rachel Coughlin, and two by Clare Thomas.
“We left seven runners on base in the first three innings,” Lassi said. “We had our chance to play with them, but we couldn’t get the timely hits that we needed. I don’t feel like we represented ourselves well enough to show how good we are. I’m glad we have a chance to play them again on Friday.”
The Timberwolves beat the Chisholm Longhorns, 13-7, last Wednesday.
MacKenzie gave up a home run, while striking out four and walking 11 hitters. She also hit a double from the batter’s box. “She allowed that home run and 11 walks, but Chisholm didn’t really hit anything else hard off her,” Lassi said. “She was able to limit the hits that she did give up, but it was nice being able to give Katrina a break and not have her throw every game.”
Clare Thomas belted out three hits in the game, including a home run and two doubles, on her way to contributing seven RBI. “She just continues to hit,” Lassi said. “Coming in as a freshman, we knew she would contribute this year. She started last year in center field. She has been a real pleasant surprise. She started the season hitting 11 for 21. And she’s hitting for power and driving in runs.”
Seliskar added two hits, while Flom, both Rachel and Kate Coughlin, and Bella Davis each notched a hit. Ely had four steals in the game, while drawing eight walks.
Ely was scheduled to travel to Northeast Range on Thursday, May 12, and host a double header on Friday, May 13, with a game against South Ridge at 2:30 p.m. and North Woods at 4:30 p.m. The Timberwolves are also scheduled to host a double header next Monday, May 16, against Northeast Range at 2:30 p.m. and Mt. Iron Buhl at 4:30 p.m.