KITTSON – The Ely hockey team opened the 2021-22 season last weekend under new leadership. Jake Myers took over the team this season after five years as assistant coach under Ben Johnson, who … 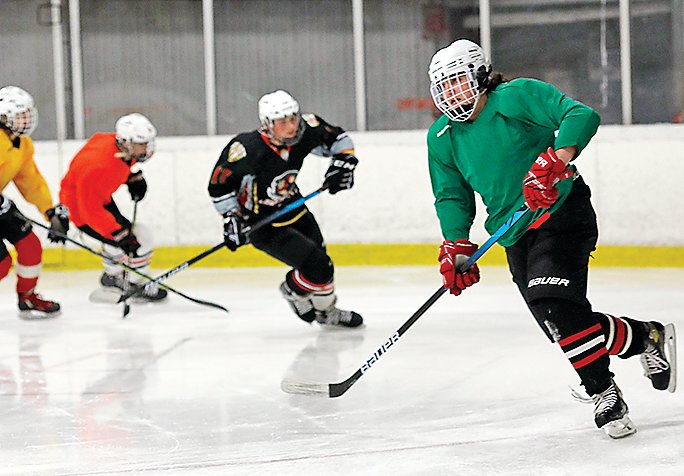 Ely hockey players go through the paces during a recent practice.
K. Vandervort 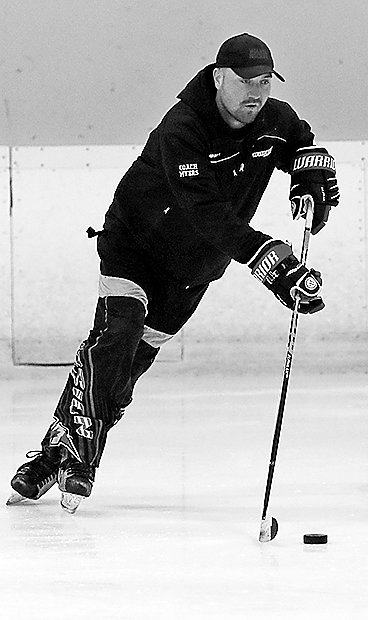 KITTSON – The Ely hockey team opened the 2021-22 season last weekend under new leadership. Jake Myers took over the team this season after five years as assistant coach under Ben Johnson, who left to coach the new team at Rock Ridge High School.
The Timberwolves look to be one of the youngest teams in Section 7A and are in the midst of rebuilding following an 0-12 record during last year’s COVID-interrupted season. The eighth- and ninth-graders from last year are a year older and bigger, but will still be going up against older, bigger, and more experienced competition.
The Timberwolves started the new season with a pair of losses last weekend at Kittson Central’s Hallock Ice Arena. On Friday, the Timberwolves lost 6-4, before falling 8-4 in Saturday’s matinee contest. But Myers saw many good things from the six-hour road trip to the northwestern corner of the state.
“We only scored nine goals all of last season,” Myers said. “In these first two games, our floor check was really good. We moved our feet the entire game, which is very important in all levels of hockey.”
Myers mentioned that one Kittson Central player scored 12 of the 14 goals for their team. “In my opinion, we were the better team depth-wise, but we just couldn’t figure out how to shut down that one player,” he said.
The first games of the season did expose a few weaknesses in Ely’s defense.
“We have to be better in front of the net this year. We have to be tougher and protect our goalie,” Myers said.
Neither team could score in the first period on Friday, but the Timberwolves were the first team to put the puck in the net at 8:35 in the second period on a power play by Deegan Richards. He was assisted by Jakson Hegman and Alex Merriman.
The Bearcats answered with two scores, a power play at 10:31, and an even strength score at 15:05. Ely’s Drew Marolt scored at 15:40 in the period with assists by Jace Huntbatch and Richards to tie the score 2-2.
Ely opened the final period with another Huntbach score at 0:36 on assists by Wes Sandy and Richards. Kittson Central hit the net at 4:13 to again tie the score at 3-3.
Richards scored again for the Timberwolves at 5:31 to give Ely a tenuous 4-3 lead, but Kittson Central put the game away with three more goals at 9:22, 12:27, and 16:36, for the 6-4 victory.
Ely took 25 shots on goal and went one-for-three on power plays. The Bearcats took 46 shots on Timberwolves goalie Chase Sandberg and were one for two on power plays. Ely was called on two penalties for four minutes and Kittson Central had six minutes in the penalty box on three penalties.
On Saturday, Ely opened the scoring at 10:07 in the first period with a goal by Kole Macho, assisted by Sam Leeson and Logan Loe. The Bearcats scored at 13:49, and Ely came right back with a one-timer by Loe at 14:24 to give the Timberwolves a 2-1 lead.
Kittson scored at 4:04 in the second period to tie the score at 2-2, then Macho scored at 5:51, on an assist by Alex Merriman, to give Ely a 3-2 lead.
But the Bearcats answered with four goals to take a 6-3 lead.
Ely’s Deegan Richards lit the lamp on a power play at 6:24 in the third period, and Kittson scored two more goals late in the period for the 8-4 win.
Each team had five penalties for 10 minutes in the game. The Timberwolves took 29 shots on goal and Kittson had 36 scoring chances against Sandberg.
“Overall, our effort was there. Our scoring was there,” Myers said. “Defensively, we couldn’t make key stops. And we have to stay out of the (penalty) box, big time.”
Myers is coaching a young team this year.
“Some of these kids have had a couple years at the high school level and I can see that as a big help for them,” he said. “We were really a bantam team playing at the high school level for the last couple of years. As the kids are growing, it is a real positive for the program. We have really strong junior, sophomore and freshman classes and those kids are improving every day.”
Myers is looking to senior goalie Sandberg to provide team leadership both on and off the ice.
“He is the only goalie in Ely history to beat International Falls,” he said. “We are really going to rely on him a lot this year as a captain.”
Hegman, a junior defenseman, returns as a team captain this year.
“He is turning into quite the veteran player for us as well. His defensive abilities are stellar. He is really tough in front of the net,” Myers said. “He has a really good stick and can stop a lot of two-on-ones and two-on-threes. He blocks shots like crazy, and is a great leader in the locker room and a good example for the younger kids.”
Myers said he is also looking to Loe and Marolt to provide team leadership.
“They will be playing a huge role for this team as the season goes on,” he said.
Ely was scheduled to play at North Shore on Tuesday, Dec. 7. The Timberwolves are set to play their first home game against Moose Lake on Saturday, Dec. 11. The puck drops at 1 p.m. that day, and will be the featured game of a day full of several hockey events at the Ely Ice Arena.