REGIONAL— Months of deep snow this winter spelled trouble for the region’s whitetail deer population and hunters are likely to see the effects of that tough winter later this fall. Tom … 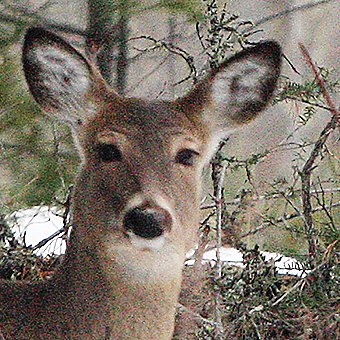 REGIONAL— Months of deep snow this winter spelled trouble for the region’s whitetail deer population and hunters are likely to see the effects of that tough winter later this fall. Tom Rusch, Tower Area Wildlife Manager for the Department of Natural Resources, predicts that bag limits for the 2020 firearms deer season will be “very conservative” this year.
Wildlife managers will meet later this month to determine antlerless harvest limits for this year.
While this year’s winter was a tough one due to extended deep snow cover, temperatures proved milder than average and that helped keep the DNR’s winter severity index, or WSI, from reaching levels experienced in some of the toughest winters in recent years. Even so, with WSI readings ranging from 132 around Eveleth to 166 in Tower, this was among the top ten toughest winters for deer over the past half century. In a typical winter in the Tower area, the WSI will reach about 110-120. Anything over 150 is considered severe.
The WSI adds a point for each day with a below zero F temperature and a point for every day with 15 inches or more of snow on the ground as measured in a mature aspen stand.
In a more typical winter, snow depth and temperatures will add similar numbers of points. This year, however, it was snow depth that dominated the index. Of the 166 points tallied this year in the Tower area, snow depth accounted for 106 points, compared to just 52 points for temperature.
“Snow depth was the main driver for winter severity this winter,” stated Rusch. “More than 100 snow-days with greater than 15 inches is a brutal winter for deer.”
Whitetail deer are at the northern fringe of their range in far northern Minnesota, and that means winter conditions can have a major impact on deer survival. “Since 2008, we have had five winters over 150 WSI at Tower resulting in a plummeting population,” said Rusch. “From 1998 to 2010, we had just one winter greater than 150 WSI, resulting in a population explosion.”
While malnutrition and starvation are the most direct causes of deer mortality during severe winters, the conditions particular to this winter also left deer more vulnerable to predators, particularly wolves. “This winter was mild by northern St. Louis County standards,” noted Rusch. “ But, the stretch of 40-50 degree temperatures in early March followed by cold weather created a thick crust.  This tipped the balance in favor of predators.  Wolves, bobcats and coyotes could stay on top while deer broke through the crusted layer.”
The tough winter is also expected to reduce fawn production this spring. “Does in a compromised physical condition give birth to fawns in poor condition that then have high mortality rates,” said Rusch. “Deer populations will decline as a result and hunter success will likely decrease this fall.”
Any recovery will require a return to mild or moderate winters, notes Rusch. “And it takes time,” he said. “Fawn production will improve following milder winters and the population will rebound.”