REGIONAL— Recent rains have helped ease drought conditions somewhat across the region, although water levels still remain very low in most cases. That’s because the rain that began to … 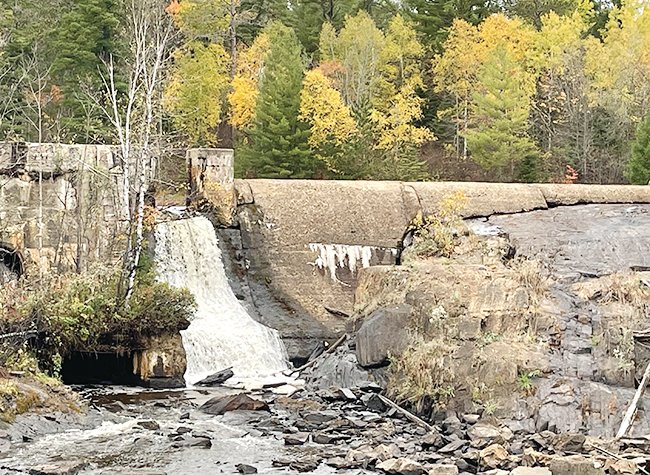 Water is again flowing through the middle spillway on the Pike River dam, a sign that water levels behind the dam have risen due to recent rains.
M. Helmberger
Posted Wednesday, October 13, 2021 6:51 pm

REGIONAL— Recent rains have helped ease drought conditions somewhat across the region, although water levels still remain very low in most cases. That’s because the rain that began to fall more regularly beginning in September hasn’t been enough to recover from months of precipitation deficits over the late spring and summer.
While rainfall has been running about average since Sept. 1 across much of the region, most reporting stations are still running well below normal levels of precipitation since the first of the year.
The longstanding Vermilion Community College weather station in Ely, for example, has reported less than 16 inches of total precipitation so far this year. That’s ten inches below the 30-year average through the middle of October. Other area stations have experienced significant deficits as well. Both Babbitt’s and Kabetogama’s official weather stations are running about 7.5 inches below normal for the year-to-date. Embarrass is running 6.25 inches below normal. Other area stations have fared better, even though they remain below normal. Tower, for example, is running four inches below average, while Orr is running about 3.5 inches behind for the year so far.
According to the most recent map from the U.S. Drought Monitor, published Oct. 7, much of eastern St. Louis County and all of northern Lake County were still rated as extreme drought, while in the rest of the region, the drought is classified as severe. The latest weekly update to the map will be issued Thursday morning, after the Timberjay’s weekly presstime.
While the recent rains have restored at least limited flow to area streams, most rivers in the region remain below their annual Q90, which means flows are running below, in some cases well below, the tenth percentile.
The Vermilion River, which is fed primarily from outflow from Lake Vermilion, is running at just 24 cubic feet per second, or cfs. That’s up from an astonishing 8 cfs during the peak of the drought in late August, but still well below the river’s Q90 of 129 cfs. The river’s normal flow for this time of year is about 450 cfs.
The Basswood River was running at 104 cfs as of Monday, well below its October average of approximately 800 cfs.
The Little Fork River is the only stream in the region currently running above its Q90. Thanks to recent rains across its watershed, the Little Fork is running at 155 cfs. That’s still well below typical flow for this time of year, but it’s above the river’s Q90.
Exceptional warmth
The return of more typical precipitation is not the only trend the area has experienced this fall. The past several weeks have also seen a return to temperature conditions more typical of the second half of August than fall here in the North Country. Since Sept. 1, most area weather stations are running about ten degrees above average, and since Oct. 1, most stations are running an astonishing 13-15 degrees above average.
Many area stations have yet to report a freezing temperature as well. That’s not just unusual, it’s record-setting in the case of International Falls, which has one of the longest periods of continuous record in the region. According to state climatologist Pete Boulay, the latest fall freeze in International Falls had been in 2016, when the border town made it to Oct. 8 without a 32-degree reading. As of the Timberjay’s Wednesday, Oct. 13 presstime, the coldest temperature recorded in the Falls so far this season was a 36-degree reading on Sept. 18.
More seasonable temperatures are in the forecast for the area in the coming week. The normal high in the Falls for Oct. 15 is 51.8 degrees, while the normal low is 31.4 degrees.