Somewhere, on the eastern edge of the Lost Lake Swamp, there’s a hollow tree that must be packed from top to bottom with sunflower seeds. As most readers have known for a long time, I feed … 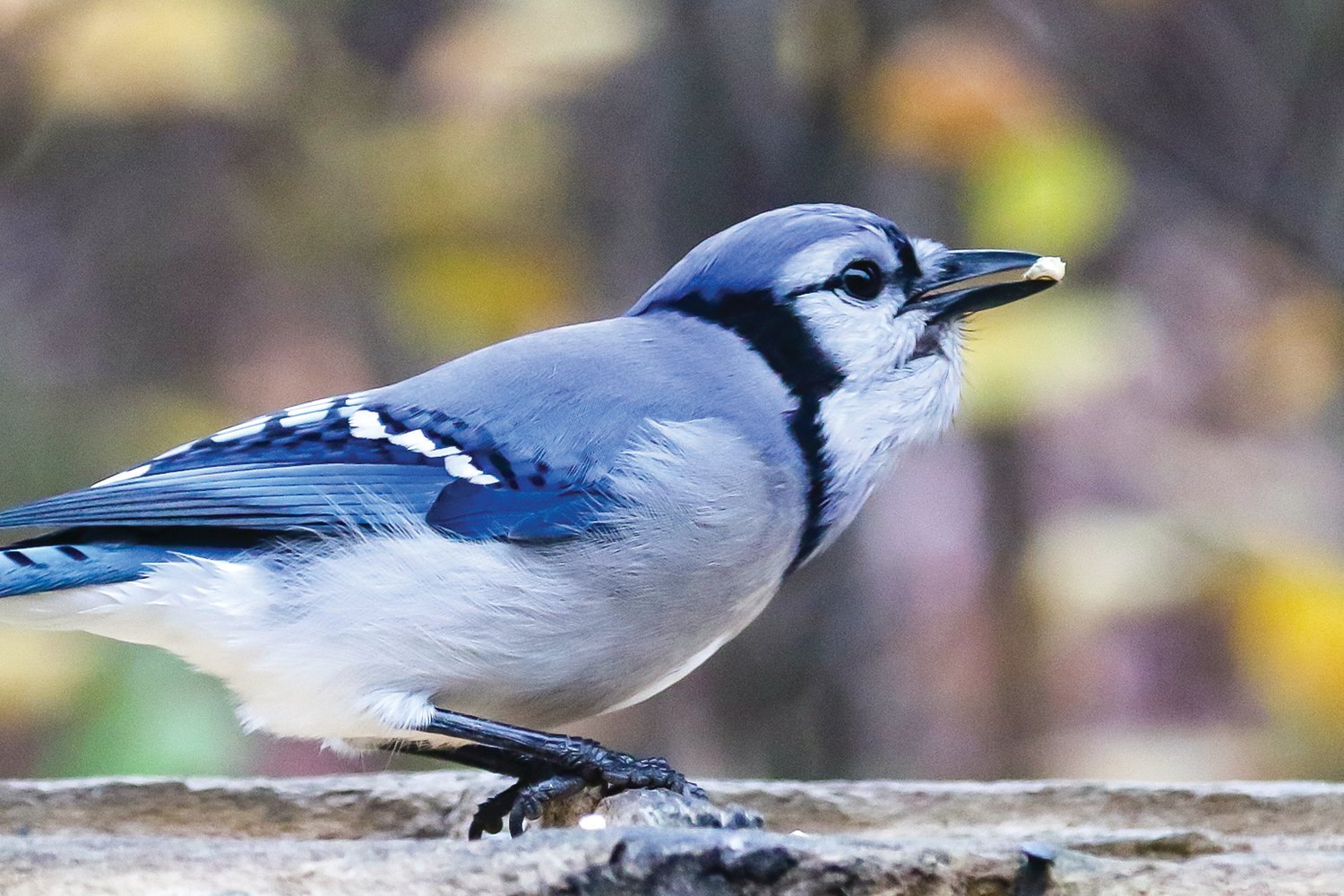 Caught mid-gulp, a blue jay prepares to down another piece of cracked corn, with its throat already bulging with corn and sunflower seeds.
M. Helmberger 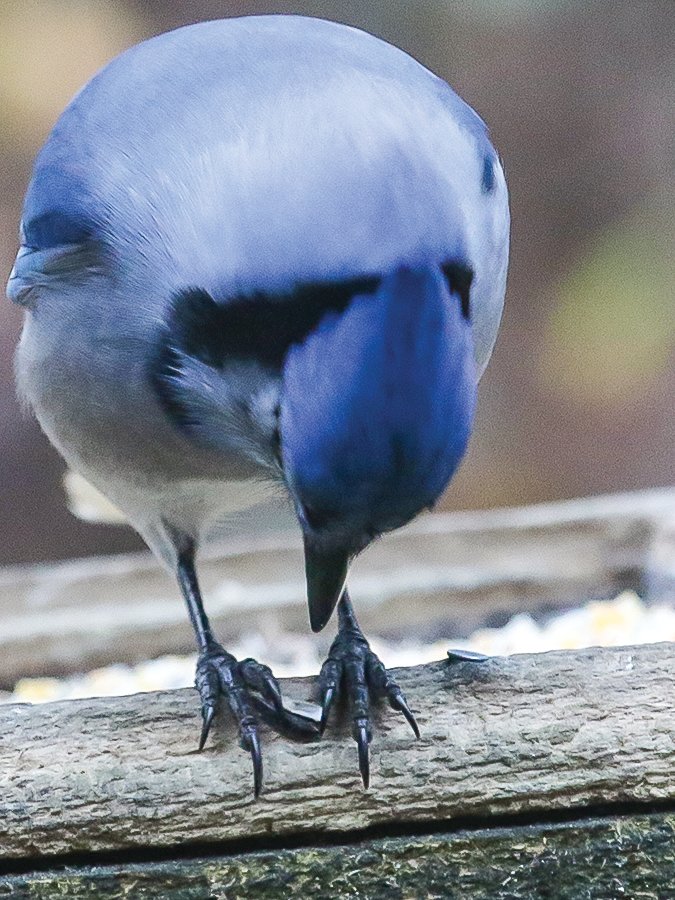 A blue jay chisels open a sunflower seed to add to its haul.
M. Helmberger 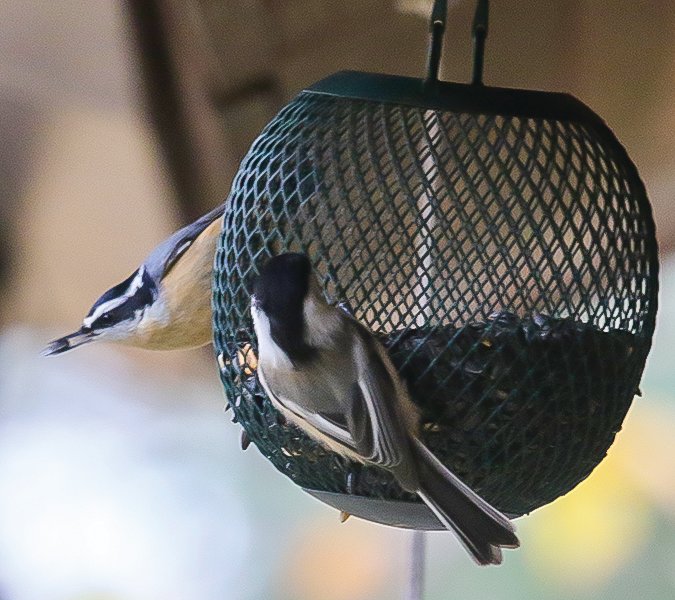 Chickadees and nuthatches use a small feeder that jays have a hard time negotiating.
M. Helmberger
Previous Next
Posted Wednesday, October 27, 2021 4:35 pm

Somewhere, on the eastern edge of the Lost Lake Swamp, there’s a hollow tree that must be packed from top to bottom with sunflower seeds. As most readers have known for a long time, I feed birds. Almost religiously, in fact. Since I was in junior high, I’ve gotten up, usually before the sun is up, to put out fresh supplies of sunflower seeds, cracked corn, suet, bread, or whatever else the latest visitors seem to prefer.
With winter rapidly approaching, it’s the hoarding season for our neighborhood jays and that means my morning offering doesn’t last long. While gray jays have been noticeably scarce around our house in recent months, the blue jays are everywhere. Tons of them, in fact. It’s not unusual to count more than 20 blue jays feeding at our house at any one time.
I use the term “feeding” advisedly, of course. This time of year, the blue jays aren’t really feeding so much as filling their winter caches ahead of the coming snow with my increasingly expensive sunflower seeds
Most of the year, they really do come to eat. They’ll grab a sunflower seed, and stand on the edge of the feeder, seed between their feet. With a couple expert blows of their oversized beaks, the seed is cracked open and the oily insides go right down the hatch. They eat a dozen seeds like this and are ready to do something productive with their day.
This time of year, the jays simply gobble up the seeds whole until their throat pouch is bulging, then fly away to disgorge it all in some hidey hole, usually in a hollow log or tree. They can make a dozen seeds disappear in about ten seconds flat and they don’t stop until all of the sunflower seeds are gone.
I think it’s this tendency that has given the blue jay a poor reputation with many people who feed birds. My father, who also fed birds for many years, used to keep a pellet gun by his back deck to take potshots at the blue jays and grackles, both of which he considered undesirables. Apparently, he’s not alone. Despite being such a familiar and beautiful bird, not one U.S. state has ever selected the blue jay as its state bird.
My father tried to instill his bird biases in me, but they never took hold. We maintain on open border policy in our yard, and the handouts go to all birds, regardless of color.
I would say we maintain equal opportunity bird feeders, except that’s not always the case, especially once the blue jays’ hoarding gene has kicked into gear. Blue jays aren’t just big, they’re kind of like bulls in a China shop at the feeder, which means the smaller birds can easily be shut out from the largesse. Kind of like how the big money interests in Washington leave the rest of us with crumbs.
I’ve solved that problem by hanging other, smaller feeders, that the blue jays can’t tap. I fill those with sunflower seeds for the half billion chickadees that seem to inhabit our yard, as well as the nuthatches and the occasional goldfinch. Think of it as affirmative action for the little guys. I now put most of the sunflower seeds in those feeders, which leaves the blue jays with a dinner plate filled mostly with cracked corn, with only scattered sunflower seeds. The blue jays will haul away the cracked corn as well, but at least that’s cheaper than sunflower seeds.
I scatter the cracked corn on the ground as well, which brings in sparrows along with regular visits from a couple ruffed grouse.
Despite their reputation as ruffians, of a sort, blue jays have solid family values. They routinely pair up for life and both parents participate in nest building and raising of young. The male jay will even feed his mate while she’s sitting on their eggs.
In good habitat, a pair of blue jays could raise quite a few offspring over the years. Blue jays can live a surprisingly long time. The oldest known blue jay in the wild lived 26 years, although that was undoubtedly a lucky one. While blue jays are relatively large, compared to many feeder birds, they aren’t large enough to avoid predation from hawks. In fact, perhaps because they make a hefty meal, they’re pretty popular with some types of hawks, which keeps blue jays constantly on the alert. They’re sharp-eyed and quick to sound the alarm, which they do with a variety of calls. Like many members of crow, or corvid, family, blue jays are accomplished mimics and will imitate the calls of hawks that tend to prey on them, apparently to alert other jays when one of these hawks is in the area.
One final interesting note about blue jays is that the pigment in their feathers, which is melanin, is actually brown.
It’s the unusual structure of the feathers themselves that reflects blue light, which gives the feathers their blue appearance. That’s different from many other birds, which frequently have other pigments in their feathers, which are responsible for their varied colors. Now, there’s a bit of trivia you can tell a friend…