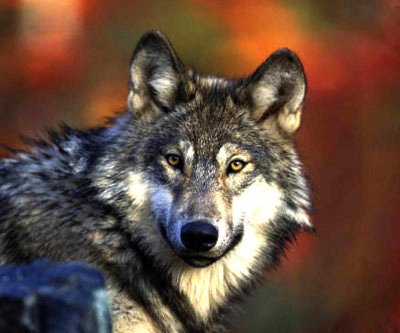 The gray wolf is now off the federal threatened species list once again, handing management of the species back to the state of Minnesota.
photo courtesy USFWS
Posted Thursday, October 29, 2020 3:29 pm

The wolf has met all recovery goals in Minnesota for decades and the Minnesota DNR has shown that it can responsibly manage a wolf season. It is now time for DNR to begin the planning process for implementing a wolf season in 2021.””
Craig Engwal- Minnesota Deer Hunters Assoc.

The U.S. Fish and Wildlife Service issued its long-anticipated decision on Oct. 29, which was the culmination of a nearly year-and-a-half long effort by the federal agency. Interior Secretary David Bernhardt traveled to Minnesota to make the formal announcement, timed just ahead of the Nov. 3 election.

The agency had previously de-listed the wolf in Minnesota, Wisconsin, and Michigan in 2013, but a federal judge had rescinded that decision two years later, ruling that the agency had not made the case for its ruling. This most recent decision, which de-lists the gray wolf even in states where it no longer exists, is likely to face its own legal challenges.

The Fish and Wildlife Service is hailing the latest effort to de-list the wolf as yet another success story for the federal Endangered Species Act, which provided protection for the gray wolf since the 1970s. At that time, only about 700 wolves were believed to exist in the lower 48 states, all of them in Minnesota. Today, gray wolves have returned to several other states in the Rocky Mountains and Great Lakes regions, although Minnesota retains, by far, the largest population outside Alaska, currently estimated at 2,700 animals.

The return of the wolf to state management could well lead to hunting and trapping of the species, as occurred after the 2013 de-listing. Still, DNR officials stressed that any such decision won’t be made until the agency completes an updated wolf management plan sometime next year. That update has been under development since late 2019. “Our process includes a diverse group of technical experts, tribal coordination, a wolf plan advisory committee and extensive public engagement,” noted DNR officials in a statement issued shortly after the USFWS announcement.

At the same time, the DNR announced that it is extending public input on the wolf management planning effort until Nov. 20, to allow the public to react to the de-listing decision. The DNR expects to issue a draft management plan in early 2021, which will include its own public comment period.

“We recognize that the USFWS’s delisting decision will give immediate rise to questions about whether Minnesota will establish a hunting or trapping season for wolves. However, we want people to understand that wolf management is about far more than whether hunting and trapping wolves is or is not permitted in Minnesota,” notes the DNR statement. “Our commitment to a healthy and sustainable wolf population in Minnesota is unwavering. We will continue to use the best available science, coordination with our federal and tribal partners, robust public engagement, and careful consideration of all perspectives to inform all of our management decisions.”

The DNR plan will also include monitoring, which was an important component of the management plan the agency initially adopted back in 2001. “Our management includes an extensive and sophisticated monitoring program, conducted in cooperation with federal and tribal partners, that gives Minnesota some of the very best data available to inform our wolf management,” noted the agency statement.

The DNR provided comments to the FWS back in July of 2019 in support of de-listing the gray wolf. Yet the agency, in its statement, acknowledged that their comments only reflected the species’ status in Minnesota. “We simultaneously recognized, however, that the situation in Minnesota is not representative of the wolf’s status elsewhere and noted that ‘blanket delisting across the United States may not be warranted.’ This continues to be our position…”

While the DNR response remained measured, others lauded the decision.

“Today’s announcement is long overdue, as scientists agree the gray wolf has been recovered for years,” said Congressman Pete Stauber. “Since arriving in Congress, I have heard from concerned constituents on this issue, including farmers who have lost thousands of dollars’ worth of cattle, sheep, and even pets to gray wolves along with our deer hunting community who have seen whitetail deer herds decline.”

“The wolf has met all recovery goals in Minnesota for decades and the Minnesota DNR has shown that it can responsibly manage a wolf season. It is now time for DNR to begin the planning process for implementing a wolf season in 2021.”