GREANEY – Beryl Novak lives a relatively solitary life in his one-room shacked tucked away in the forest northwest of Greaney, and evidently, it’s a lifestyle many find intriguing, as a … 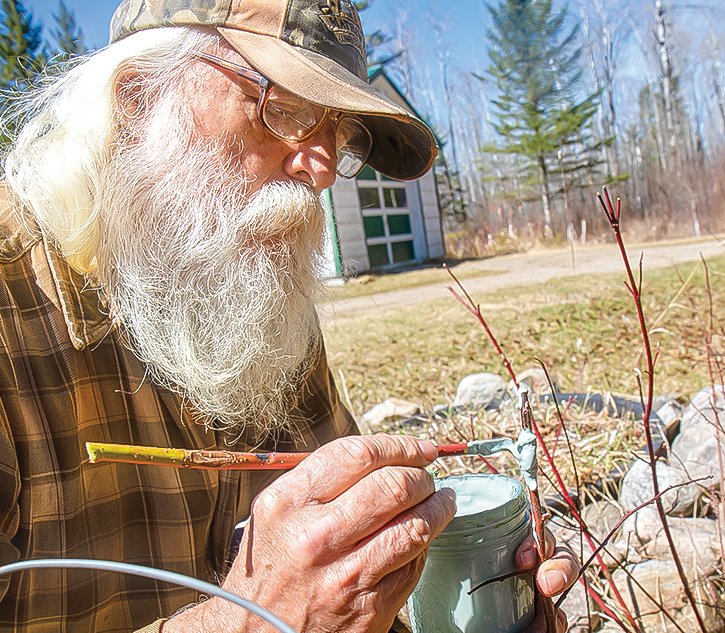 GREANEY – Beryl Novak lives a relatively solitary life in his one-room shacked tucked away in the forest northwest of Greaney, and evidently, it’s a lifestyle many find intriguing, as a recent article about him on a Duluth newspaper website has garnered more than a million hits and international attention.
“I thought it would just appear in the Duluth paper and that would be it, and here I find out it’s aired all over the world,” Novak said.
John Myers covers the outdoors, environment and natural resources for the Duluth News Tribune, and he and Novak have known each other since the late 1980s. The pair met when Myers was researching a story about someone Novak worked for who allegedly was cooking the books of the company’s payroll. Myers came back in 1991 to do a follow-up, and they got together again, this time to enjoy the outdoors together.
“He came up a couple of times that winter, I think it was, and we went ice fishing on Pelican Lake,” Novak said. “Over the years it kind of just fell off, we didn’t get in contact, and we just missed each other for years.”
But Myers’ work often brings him back to the area, and he recently got back in touch with Novak.
“He said he’d drive by Gheen Corner and he’d often think of me,” Novak said. “He sent me a card with his phone number and I called him. He said he wanted to come up and do some grouse hunting and write an article. We lined up the first of November and he said he was bringing the staff photographer with him. They arrived here in the morning and I took them out hunting and we talked a lot.”
What Myers came away with was well more than a hunting story. With hunting as the hook, Myers produced a full-length personality feature, from anecdotes about Novak’s youth to his eight-month tour of duty in an Air Force hospital during the Vietnam War and his eventual transition to the 16x20 house and 40 wooded acres in the North Country that Novak has called home for 44 years. Myers painted a compelling portrait of a self-reliant, generally solitary soul who lives life in “a rhythm that revolves around nature’s seasons – things like putting up firewood, tending his big garden, planting and grafting dozens of apple trees and walking hundreds of miles each autumn in search of grouse,” he wrote.
Novak’s simple lifestyle doesn’t include an internet connection, so he didn’t see the article go up online on Nov. 5. He got to read it the next day when a cousin of his bought a copy of the paper in Cook and delivered it to him.
“It was pretty accurate,” Novak said. “Usually, they screw up a little bit here or there, but overall, the whole thing was very accurate. That’s the way I am, and I don’t make excuses for it.”
Since the Duluth News-Tribune is part of Forum Communications, a regional media company with newspapers and specialty publications in Minnesota, Wisconsin, North and South Dakota, it was a foregone conclusion that the story would be seen in the upper Midwest, but the response has been well beyond what anyone might have imagined.
“This story broke (Forum Communications’) internet,” Myers said in a Nov. 12 email exchange with the Timberjay. “It’s had nearly one million page views, the most ever for the company.”
It’s now well over a million, as Novak found out in a phone call with Myers last week.
“I had absolutely no idea that something like this was going to take off like this,” Novak said. “He said he received correspondence from South Africa and talked with somebody who said her daughter in Hawaii read about it, and another guy who said his sister saw it in Bend, Ore. So, I guess it’s going to be all over the world. Just today, the UPS guy stopped and dropped off a package and he said, ‘You’re famous!’”
And some of the contacts Myers has received have been about more than just expressing praise for the article, Novak said.
“John was saying that people wanted to meet me and talk to me and all this,” Novak said. “I don’t know what the hell I could tell them.”
Novak hasn’t speculated too much about why his story has garnered all this attention, he said.
“Maybe it’s people who are stuck in a job somewhere in the cities who have no way to get the hell out to see that life is other than just city living or whatever,” Novak said. “They probably would like to try something like this or just get away from the stress of living like that. In town, you’re just another face, and it can be very lonesome in town when you’re packed in with people. I don’t get lonesome around here.”
Late night talk shows often track down quirky stories like Novak’s and book them for appearances, but if any would come calling, they’ll have no luck luring Novak away from Greaney. He’s more than content with the attention he’s already gotten.
“I wouldn’t go to New York or any place like that for love nor money,” he said. “I’ll just stay out here. I got one piece of fan mail from a lady in Hermantown, but she and I went to school together. It was a very complimentary card. I sent a card back to her, just thanking her for acknowledging it.”
Novak did offer one bit of reflection for people who find what he has appealing.
“Take a little bit of time and simplify your life, slow down,” he said. “You don’t have to own everything. You get so much stuff it owns you after a while. Some of the best days I had this fall were out hunting on a nice sunny day. I may not see a darned grouse or anything, but it’s still a good day.”