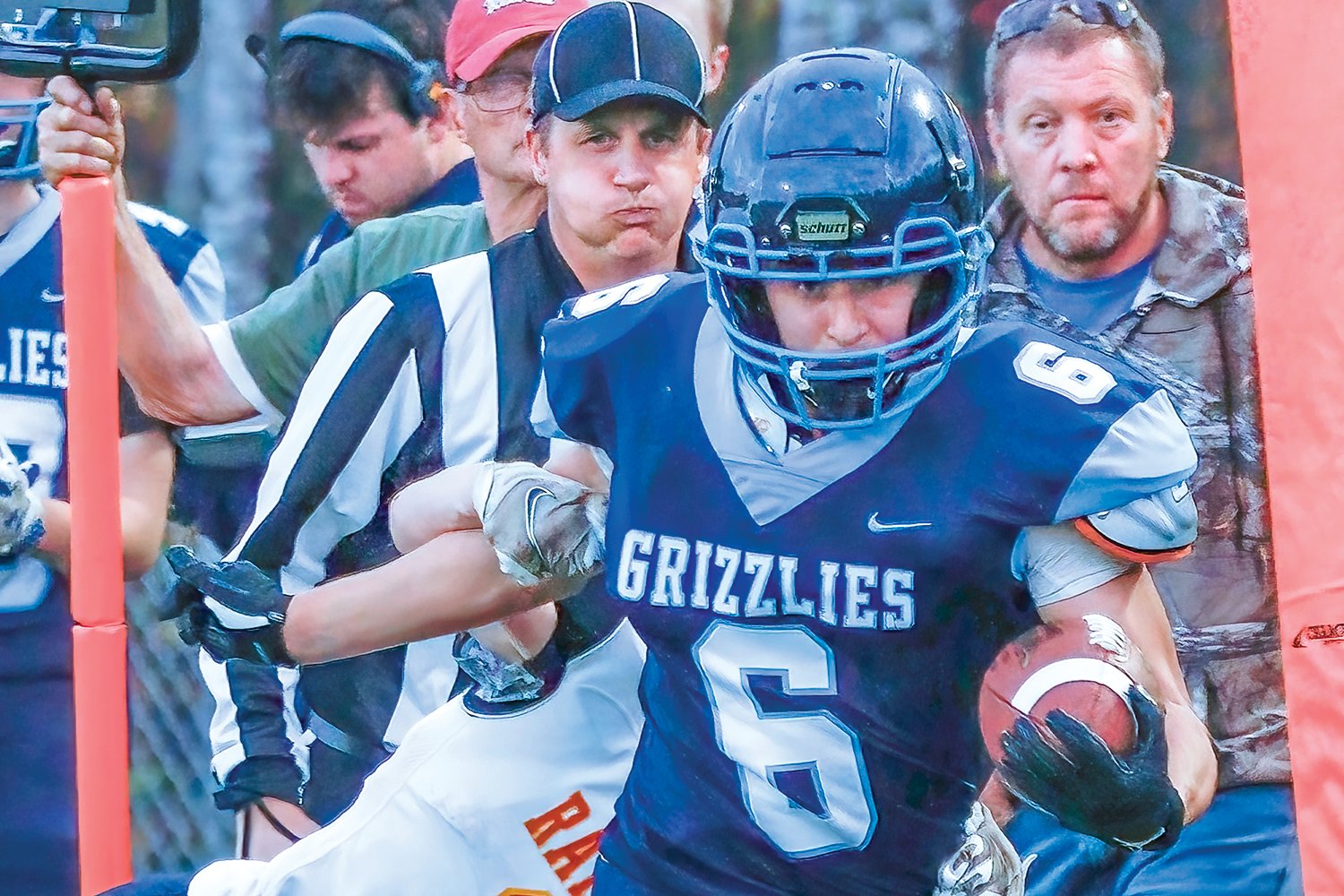 Jared Chiabotti sheds a Raiders tackler before streaking down the sideline for the Grizzlies’ first touchdown.
D. Colburn 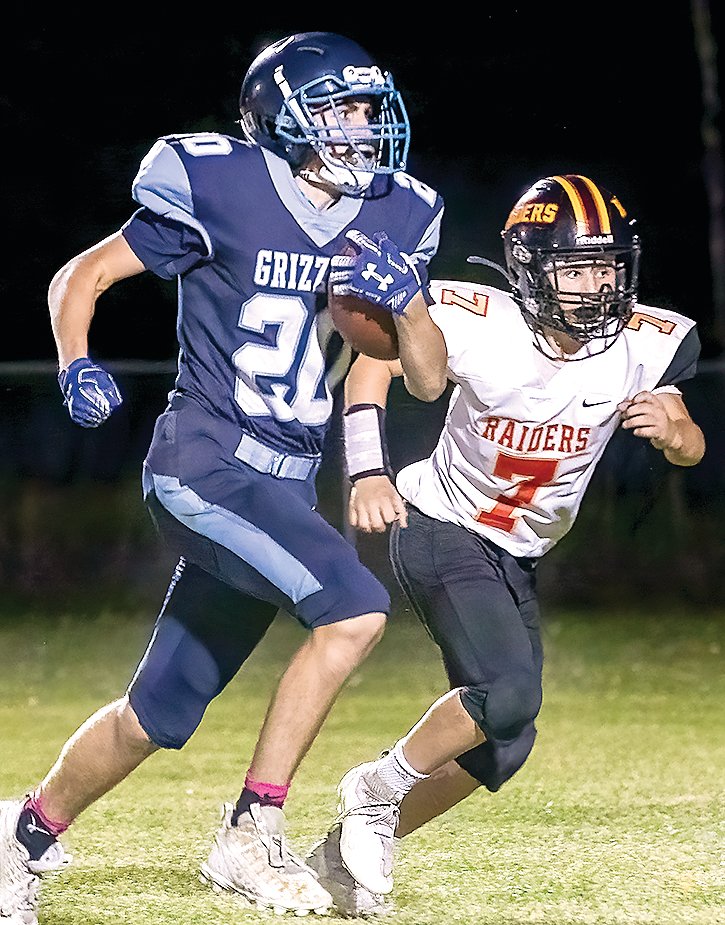 Receiver Davis Kleppe speeds past a Raiders defender on his way to the end zone.
D. Colburn
Previous Next
Posted Wednesday, October 13, 2021 6:57 pm

FIELD TWP- North Woods quarterback Ty Fabish completed touchdown passes to four different receivers and T.J. Chiabotti ran for more than 200 yards as the Grizzlies turned a slow start last Friday into a thorough 56-11 thrashing of visiting Mille Lacs.
The matchup against the undersized and outmanned Raiders gave Grizzlies Head Coach Joel Anderson the chance to employ a full range of options on offense, once his team figured out how to stop the opponents.
“The first quarter we were a little flat,” Anderson said. “They were running some stuff that we hadn’t seen on film and we had to make some adjustments. We were getting a little too deep with our defensive linemen and linebackers and opening up holes for them.”
The Grizzlies scored on their opening possession, a 60-yard, six-play drive capped by a 22-yard sideline pass from Fabish to Jared Chiabotti that the junior running back/receiver turned into a touchdown, but the score didn’t appear to faze the underdog Raiders.
Starting at their own 21, Mille Lacs runners A.J. Drift and Zach Remer shared rushing duties as the Raiders confidently moved to the North Woods 22. But a holding call set up second-and-long, and the Grizzlies stiffened to snuff out the drive and turn the ball back to the offense in the waning seconds of the first quarter.
The Grizzlies couldn’t sustain that drive and punted the ball away, but the defense forced the Raiders into a four-and-out that gave North Woods possession at its own 45 after the punt.
T.J. Chiabotti made the Raiders pay on the next play with his first big run of the night, a 65-yard jaunt off right tackle for a touchdown. Fabish competed a pass to Eric Aune for the two-point conversion and a 14-0 lead at the 9:37 mark of the quarter.
Defense dialed in and offense on track, the Grizzlies scored touchdowns on their next three possessions before halftime. Chiabotti dashed 38 yards for a score to put the Grizzlies up 20-0, and Fabish connected with a streaking Eric Aune on a 24-yard scoring strike. T.J. Chiabotti’s conversion run made the score 28-0 with 1:51 remaining before the half.
After the defense forced two incomplete passes and a Mille Lacs punt, the Grizzlies got the ball back 75 yards away from the Raiders end zone and with only 16 seconds left on the clock.
Jared Chiabotti picked up 26 yards on a pass from Fabish, and the Grizzlies immediately called time out. North Woods went to the air again, this time on a screen pass to T.J. Chiabotti. With a wall of Grizzlies in front of him, Chiabotti ran down the right sideline, then cut toward the middle of the field. There were five fellow Grizzlies within five yards of him as he crossed the goal line.
“We’ve been working on that all year, making sure everybody on the field knows to get downfield and keep finding guys to block, because at any given time one play can go for a very long way,” Anderson said.
Chiabotti did it again on the first possession of the second half, turning a fourth-and-eight at the Raiders 44 into a 44-yard touchdown run. Olin Nelson hauled in the conversion pass for a 44-0 lead.
Fabish was at the controls of Air North Woods again on the next possession, hitting Davis Kleppe about 15 yards beyond the line of scrimmage, and the Grizzlies’ senior raced the rest of the way for a 36-yard touchdown with 6:02 remaining in the third quarter.
Seeing the Grizzlies pummel his squad for 44 points in a little over a quarter of elapsed game time, Mille Lacs Head Coach Jim Henrickson raised a symbolic white flag by asking the officials to start the running clock for the rest of the quarter.
The Raiders got a 55-yard run from Drift that set him up for a subsequent three-yard touchdown plunge on their next possession, but the Grizzlies responded immediately.
Fielding the ensuing kickoff on his own eight-yard line, Jared Ciabotti streaked straight up the middle field for his third kickoff return for a score this season, and the Grizzlies’ final touchdown.
“When we came into camp this year we worked really, really hard on special teams,” Anderson said. “We have a lot of really nice athletes – it’s almost like an offensive play for us. Hopefully that continues.”
Fabish went eight-for-12 passing for 143 yards, four touchdowns, three conversions, and no interceptions.
“Our offensive line gave Ty a lot of time,” Anderson said. “It was nice to be able to run those plays. We showed we’ve got a lot of athletes and if we get the ball in their hands, good things will happen for us.”
T.J. Chiabotti carried the ball only 12 times but picked up 202 yards, three touchdowns, and a conversion to add to his 49-yard receiving score. While that total keeps Chiabotti near the top of the state’s rushing leaders and scorers among all classes, that kind of efficiency is beneficial at this stage of the season as the Grizzlies start eyeing a playoff run.
And while Chiabotti is far and away the team’s statistical leader on offense, he’s among a host of senior and junior players providing the leadership that make the Grizzlies tick.
“They’re the kind of kids that are the first ones to practice and the last ones to leave,” Anderson said. “They’ll grab stuff and pick up the field as they walk by. They help the younger guys through different drills and explain to them what things are, which shows not only their football IQ but just the kind of people that they are.”
The Grizzlies were scheduled to be in action again on Thursday with a home tilt against Mesabi East before closing out the regular season on the road on Tuesday, Oct. 19 against East Central.