SOUDAN- The air carried a chill and the skies were mostly cloudy on Monday, but the North Woods Grizzlies heated up in the latter part of Monday’s game against Northeast Range to claim an 11-6 … 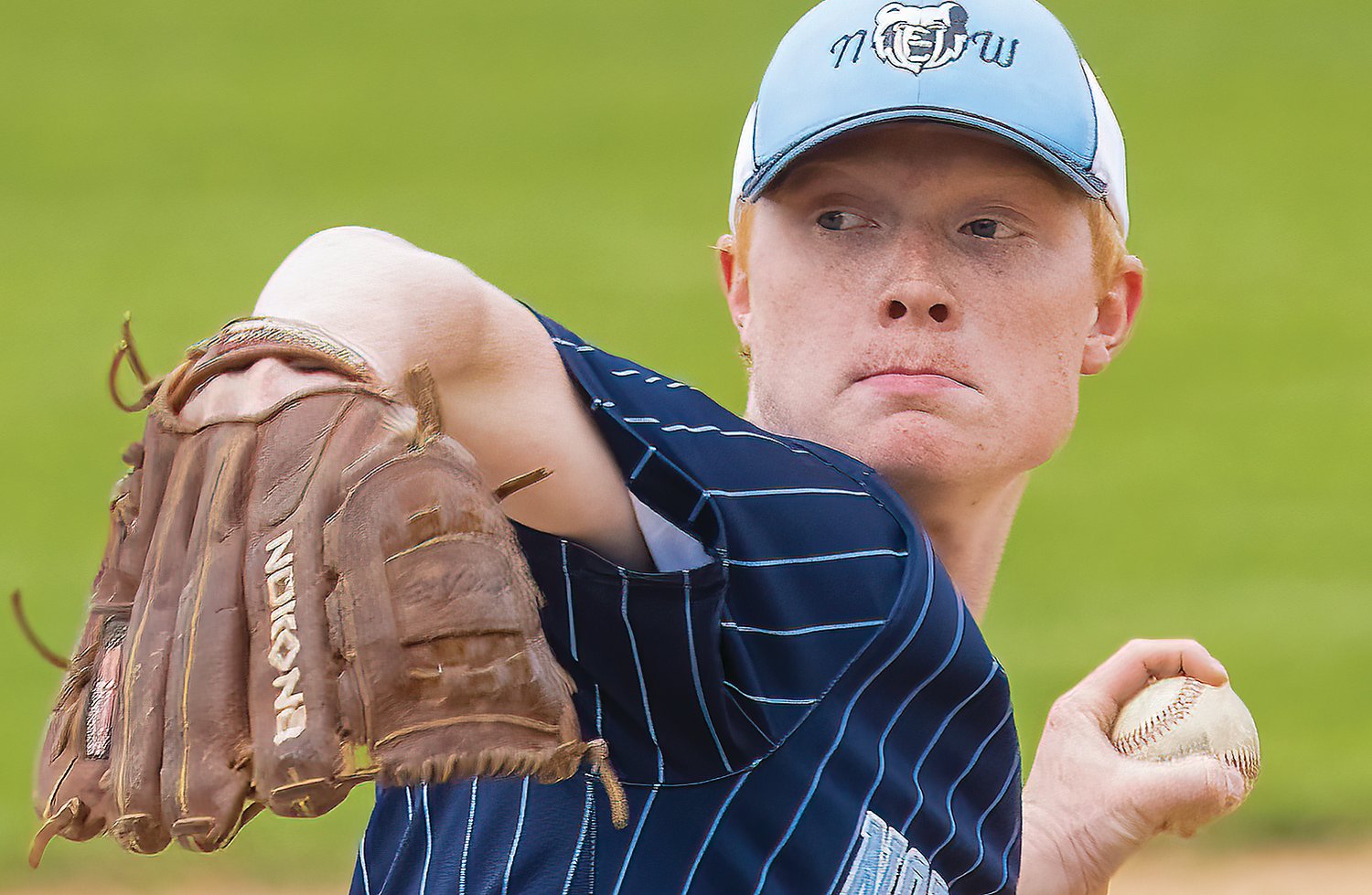 The Grizzlies' Louie Panichi winds for a pitch.
D. Colburn 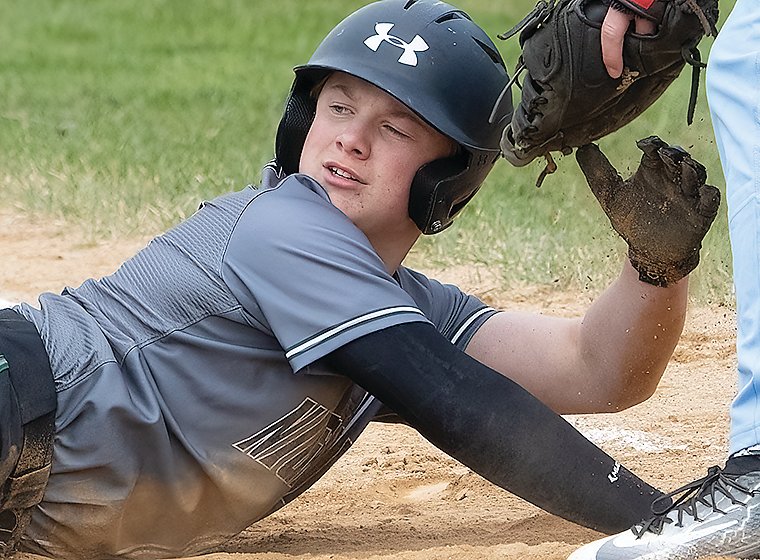 NER's Zander Lislegard signals for time after diving safely back to first base on a pickoff attempt.
D. Colburn 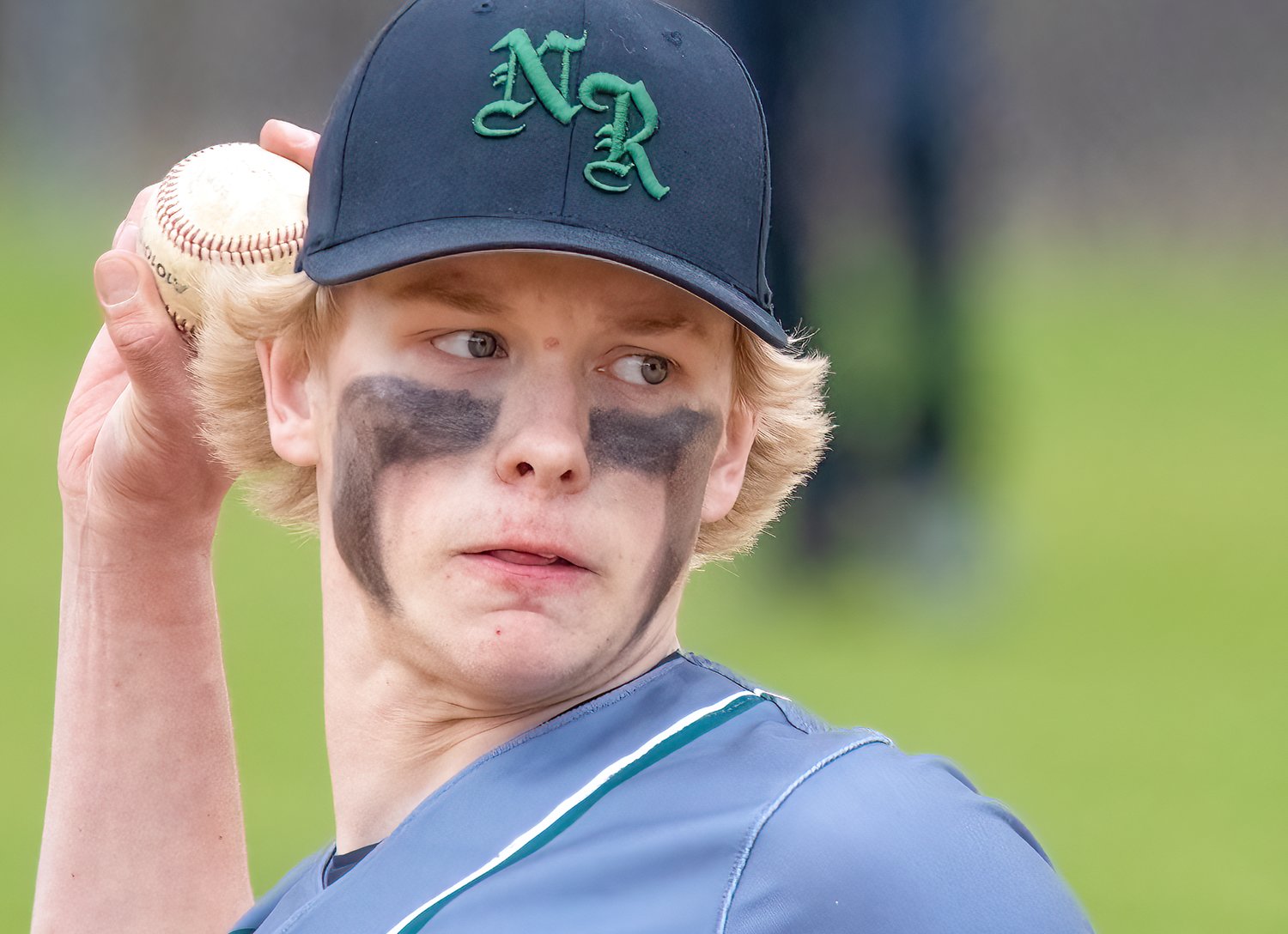 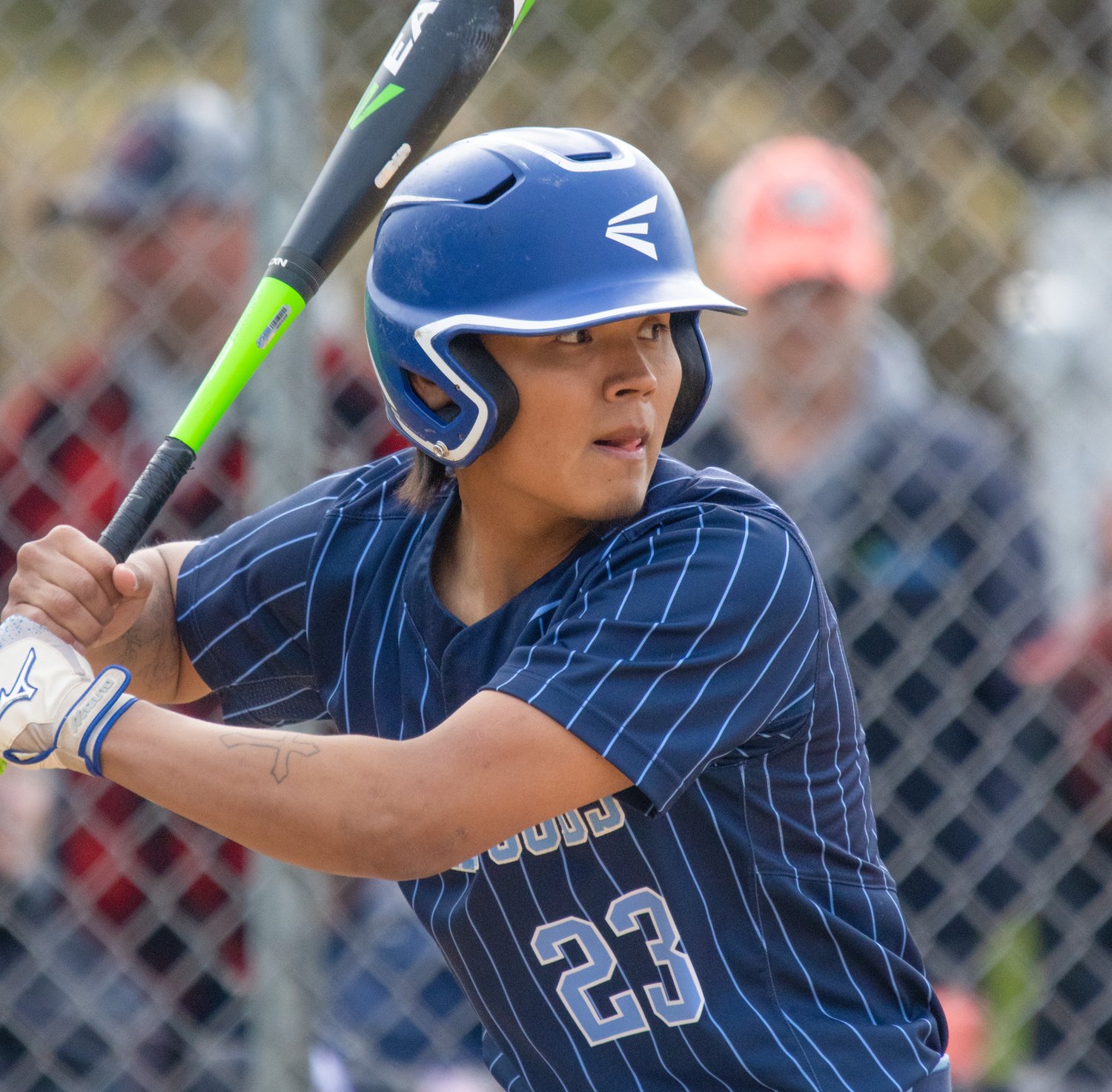 Tate Cly rapped a pair of doubles for the Grizzlies.
D. Colburn 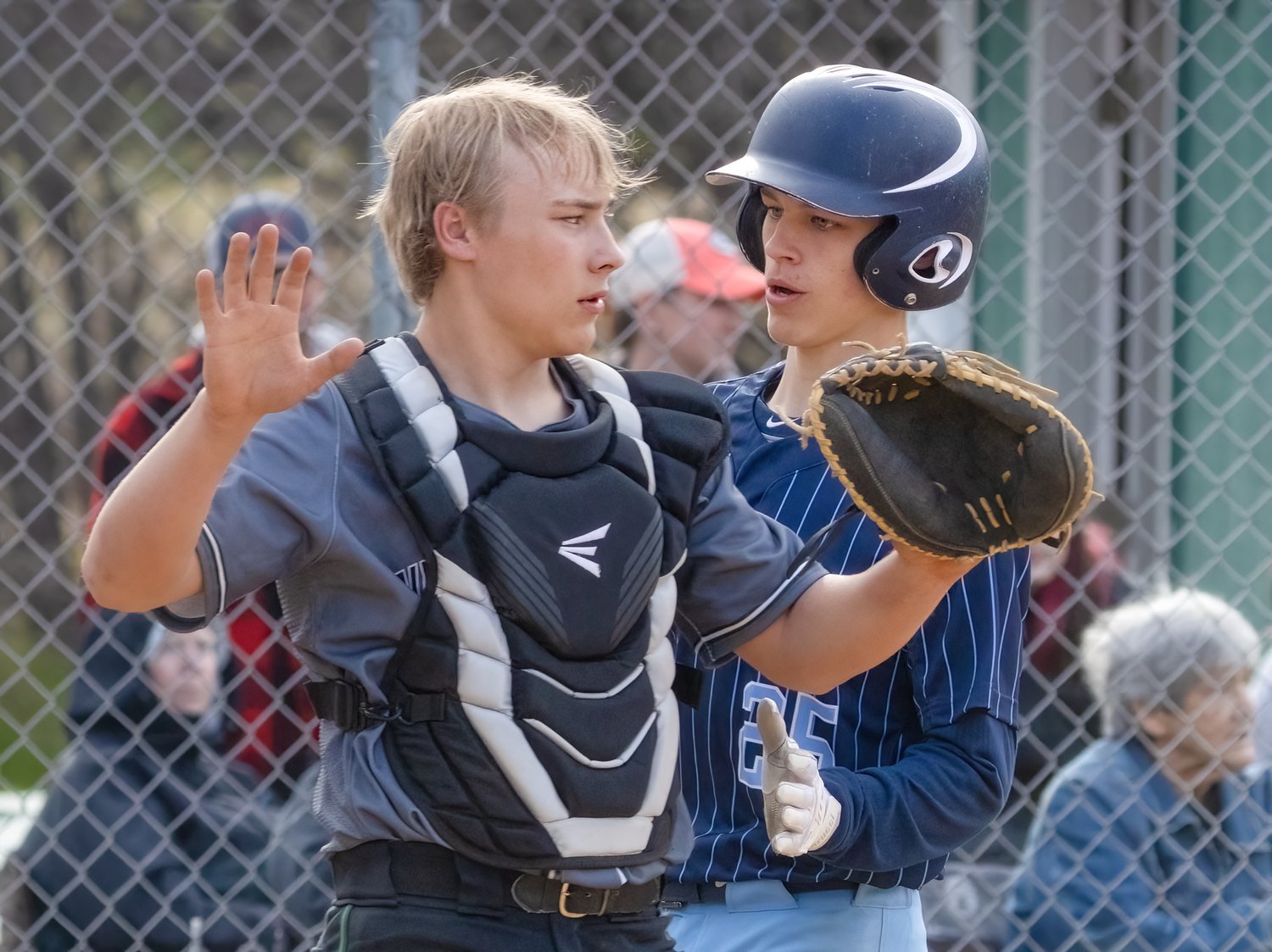 NER cather Mikko Maki looks for the ball as Talen Jarshaw scores for the Grizzlies.
D. Colburn
Previous Next
Posted Wednesday, May 18, 2022 9:20 pm

SOUDAN- The air carried a chill and the skies were mostly cloudy on Monday, but the North Woods Grizzlies heated up in the latter part of Monday’s game against Northeast Range to claim an 11-6 win on the Soudan diamond.
Starting pitchers Louie Panichi for the Grizzlies and Elliot Levens for the Nighthawks both got roughed up a bit in the first inning as the designated away-team North Woods took a 3-2 advantage. Both hurlers then settled into a groove, and supported by good defensive play, kept their opponents scoreless going into the bottom of the fourth, when NER pushed across a run to tie the contest at 3-3.
From there it was all North Woods, with the Grizzlies scoring twice in their next at bat to reclaim the lead. North Woods sent ten batters to the plate in the sixth, hammering the Nighthawks’ bullpen for five runs, and added an insurance run in the seventh. The eight-run cushion was too much for the Nighthawks to overcome, although they tried, rallying for three runs in their last at bat to account for the 11-6 final.
Panichi picked up the win for North Woods, going four innings and giving up two earned runs and three hits against three strikeouts. Reliever Ben Kruse rang up four strikeouts while yielding a hit and a run.
Levens looked sharp in sending eight Grizzlies to the bench on strikeouts, but the Grizzlies tagged him for five hits and four earned runs in four innings for the loss.
At the plate, Louie Panichi and Tate Cly had hot bats for North Woods, Panichi rapping three hits and Cly recording a pair of two-baggers. NER was led by Miko Maki and Zander Lislegard with two hits each.
“We had good quality at bats, and we had guys on base pretty much every inning,” said Grizzlies Head Coach Jeff Smerud. “Their pitcher settled down and he throws hard and keeps guys off balance. We got enough swings on him, kept fighting him off with foul balls, and then the pitch count rule came into play. As you could see on the scoreboard, it changes (in our favor) right after he goes out.”
It was the third win of the weather-abbreviated season for the Grizzlies, and having played well even in most of their losses, Smerud was pleased to see his team come through with the win.
“We’ve been pretty consistent all year. We’ve had close games with Virginia, Cherry, and Mesabi East,” Smerud said. “It’s been a pretty good year, the kids are all playing pretty decent baseball, and our goal was to be playing our best baseball at the end of the season.”
He also gave credit to Davis Kleppe and Eli Smith, two-sport athletes this spring as they also tee up the ball for the North Woods golf team. They had a tournament earlier in the day before suiting up against NER.
“You couldn’t ask more from a couple of guys who came in from a golf meet today,” Smerud said. “They’ve given us everything we could possibly ask from them and they’re a huge help to this team. I don’t think they realize how big of a help they really are.”
Inclement weather has meant more than just canceled games for North Woods, as their home turf has suffered. They played all their games to date on the road, and they’ve only been able to practice on it twice, Smerud said. If the weather was cooperative, the 3-6 Grizzlies had a scheduled Thursday home game against Cook County.
“It’d be nice to have a home game,” he said. “We only have four scheduled all season.”
The loss dropped the Nighthawks to 3-4, with a game against Wrenshall on Tuesday.