Barnum stands in the way of possible Deer River rematch

Barnum stands in the way of possible Deer River rematch 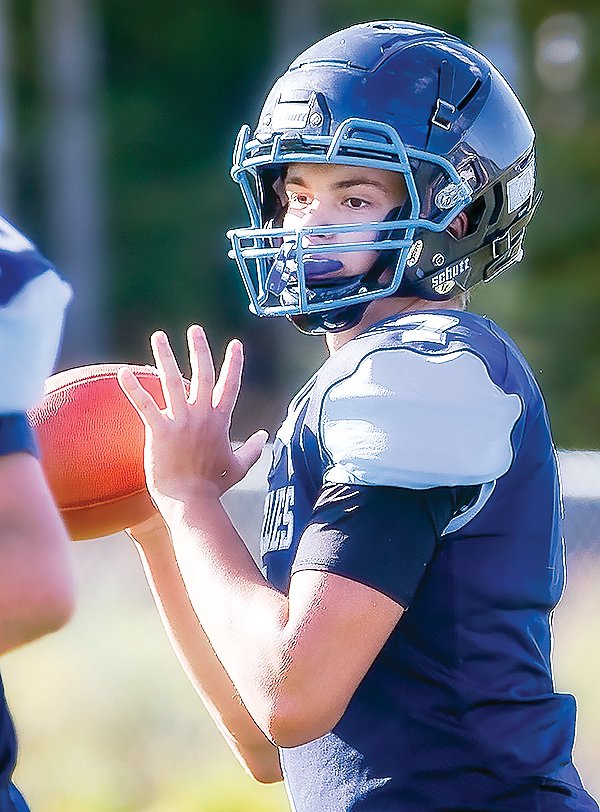 In their previous contest with Barnum on Sept. 24, Grizzlies quarterback Ty Fabish zeroes in downfield for a touchdown pass to T.J. Chiabotti, the Grizzlies’ first score of the game. The two teams will face off again on Saturday, at North Woods.
D. Colburn
Posted Wednesday, October 27, 2021 4:28 pm

FIELD TWP- Last year, COVID-19 wreaked havoc on Minnesota’s prep football playoffs, which ended abruptly by executive order with the Deer River Warriors and the North Woods Grizzlies eyeing a 7A sectional championship tilt that never happened.
But on Tuesday, COVID brought a championship matchup between those sectional rivals a step closer.
The Grizzlies were prepped for a quarterfinal game that night against the East Central Eagles, a team they defeated 52-7 on the road exactly one week earlier. Instead, North Woods got the night off and a free pass to the next round when winless East Central forfeited the game because of coronavirus issues.
The Grizzlies, 7-2 and seeded second, would love nothing more than to reach the Nov. 5 sectional championship game, but to get there they’ll first have to get through the Barnum Bombers on Saturday afternoon.
A 42-20 win over Mille Lacs on Tuesday earned Barnum a return trip to North Woods and a chance to avenge one of three losses the Bombers suffered in the regular season.
On Sept. 24, North Woods took nearly two quarters to put points on the board before rolling to a 28-14 win over Barnum. The Grizzlies got 203 rushing yards and three touchdowns from T.J. Chiabotti and a 70-yard kick return score by Jared Chiabotti. Ethan Byrum and Eric Aune keyed a defensive effort by the Grizzlies that allowed only one Bombers’ score until the final seconds of the game.
Kickoff for the Grizzlies and Bombers will be at 2 p.m. Saturday at North Woods. Per Minnesota State High School League policy, admission will be charged.
In Saturday’s other semifinal game, Deer River will take on Chisholm, a 40-12 victor over Braham on Tuesday. Saturday’s winners will meet in the sectional championship on Friday, Nov. 5 in Proctor.