FIELD TWP- The Cherry Tigers were more like mild cats on Tuesday as the North Woods volleyball ran its winning streak to five on Tuesday with a 3-0 win on the Grizzlies’ home court.A … 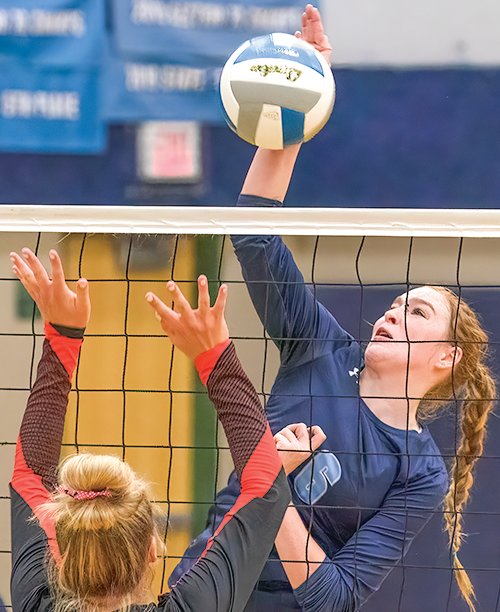 FIELD TWP- The Cherry Tigers were more like mild cats on Tuesday as the North Woods volleyball ran its winning streak to five on Tuesday with a 3-0 win on the Grizzlies’ home court.
A Parents’ Night crowd cheered as the Grizzlies bolted out of the gate on a 9-0 blitz fueled by Lauren Burnett’s serving and Skyler Yernatich’s spiking. Cherry could do little right and North Woods could do little wrong as the Grizzlies breezed to a 25-8 win.
North Woods doled out more of the same in the second game, with a big Hannah Kinsey block staking the home team to a 10-2 lead, and a Yernatich ace put the Grizzlies up by 10, 14-4. Head Coach Kandi Olson took advantage of the lead to rotate in more of her bench, and the Grizzlies notched a 25-15 win.
The Tigers pounced on Olson’s lineup shuffling to start the third game, building an 8-1 lead. Cherry was still up by seven at 20-13, but the Grizzlies appeared unfazed as they mounted a comeback. The Tigers missed on a pair of kill shots while Yernatich slammed one down the middle to keep North Woods within striking distance at 22-16. With Tori Olson serving for the Grizzlies, Hartway and Karah Scofield combined on a block to cut the score to 23-19, and aided by a call against Cherry for mishandling the ball, North Woods was within two, 23-21. A kill shot that ended up in the net handed the ball back to the Tigers with a chance to win it, but another call went against them and the Grizzlies were still alive. Yernatich served up an ace to knot the score at 24. Clearly rattled, Cherry mishandled the ball again on the next point, and Hartway scored a game-winning push shot for the 26-24 victory and match win.
With a weekend tournament at Hill City canceled after several teams withdrew, Olson said it was important to take the opportunity to get game experience for her bench players.
“I’ve got some great players sitting. They are such a big part of this team,” Olson said. “Even though they don’t get all the time during the regular match, when I need them they come through, and I really can’t say enough good about them.
The Grizzlies have taken command early in almost all of their matches this season, and Olson attributes that to simple team chemistry.
“They really enjoy playing with each other, and when you enjoy each other you want to be successful,” Olson said. “They know that they’ve got the tools to do some pretty fun things and they want to do them right away, right off the bat.”
The sternest test of the season for the Grizzlies was scheduled for Thursday when they were to play host to Ely. The undefeated Timberwolves have been dominating their opponents and lead subsection 2 of section 7A, with the Grizzlies nipping at their heels in second. Olson was looking forward to the challenge.
“They’re an excellent team,” she said. “They’ve got a lot of cannons that they’re ready to fire and we’re really working on how we’re going to manage that. We’ve been working on some key things that are really going to benefit us in the future, and whether we come out on top against Ely or not, we’re looking at that as a big growth opportunity because there’s a lot of season left.”
North Woods will travel to Littlefork-Big Falls for a match on Monday, Sept. 26, then return home the next night to take on Cook County. The Grizzlies will be on the road again on Thursday, Sept. 29 to take on Northeast Range.