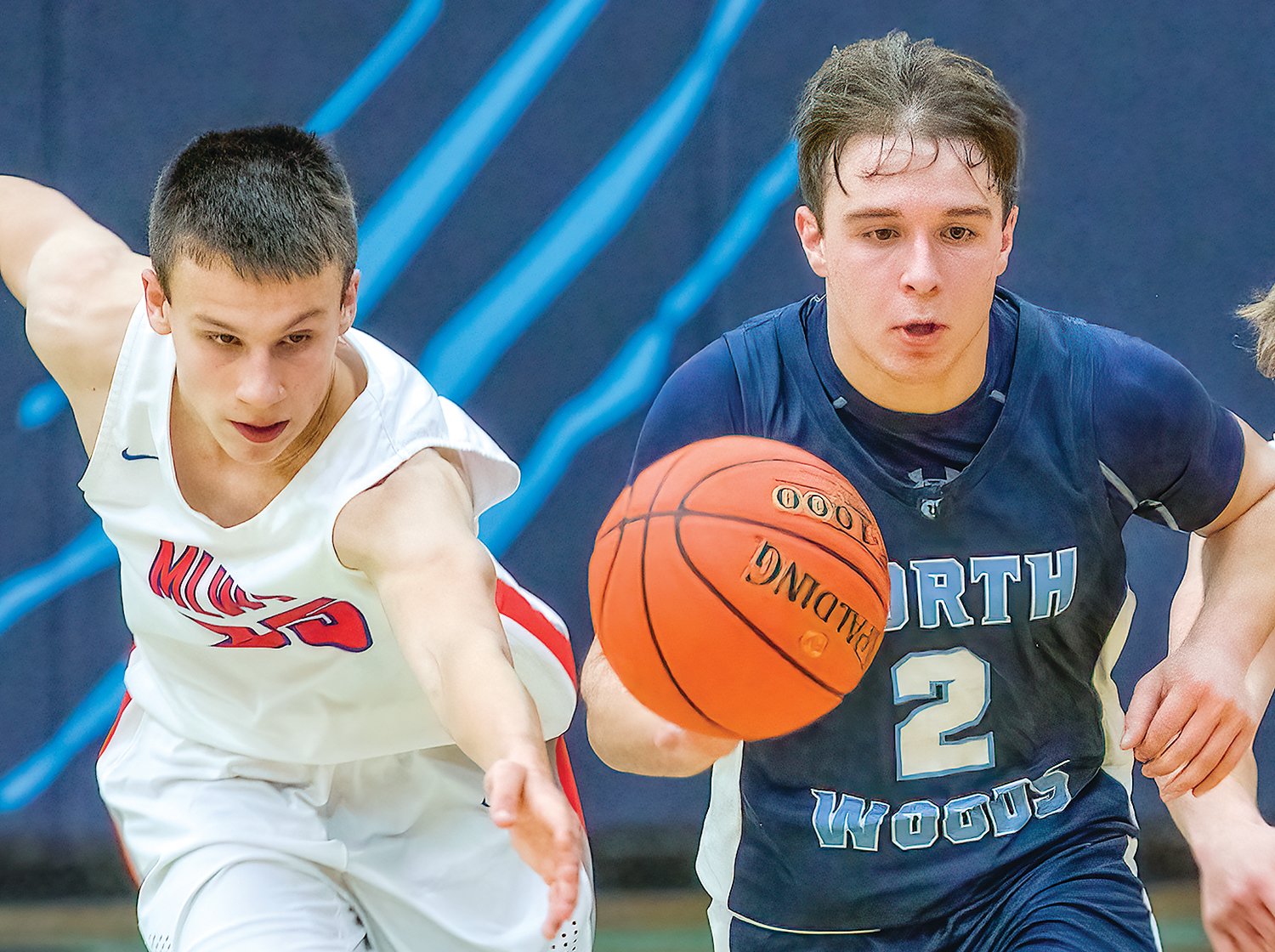 The Grizzlies’ Jared Chiabotti races ahead of a Moose Lake defender on a fast break.
D. Colburn 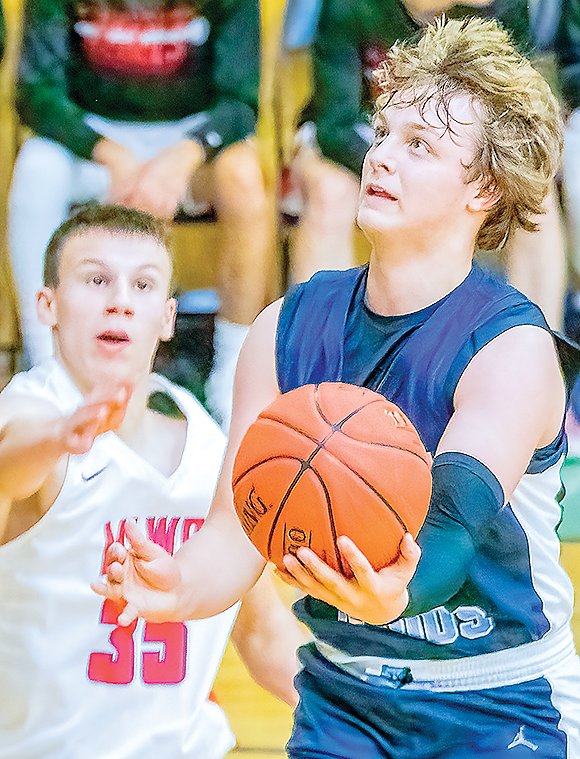 FIELD TWP- Junior guard Jared Chiabotti scorched the nets for 36 points last Thursday as the North Woods boys passed their toughest test of the hoops season thus far with an 86-73 home win over 7AA Moose Lake.
Averaging 78 points a game and with 30-plus-point wins over 7AA foes Virginia and Aitkin, the 3-1 Rebels were well-equipped for a possible takedown of the high-flying Grizzlies, but Chiabotti was a force they couldn’t reckon with.
The Grizzlies held a slim 14-12 lead when Chiabotti nailed his second trey of the game, igniting a 25-12 North Woods run that would prove decisive. Chiabotti scored ten consecutive points before Sean Morrison added a bucket. By the time Chiabotti followed a Davis Kleppe triple with a rare four-point play after he was fouled on a successful trey and hit the subsequent free throw, the Grizzles led 39-24. Chiabotti hit four threes and scored 17 points in the run.
“Jared got hot,” Grizzlies Head Coach Will Kleppe said. “I could hear guys talking about it and swinging the ball to him. They were looking for him, and then he returned the favor when it got a little tighter in the second half.”
Indeed, the Grizzlies had to battle all the way to the final buzzer to win this one, fending off numerous attempts by the Rebels to reel them back in. Moose Lake was within seven at 67-60 when Brenden Chiabotti scored seven points in about two minutes to give North Woods a 12-point cushion at 74-62.
With two minutes to play the Rebels were threatening again when Logan Orvedhal’s fourth trey of the game narrowed the gap to 77-71. A basket by Morrison was followed by a huge shot block by the Grizzlies’ Jonah Burnett, and free throws by Morrison and Jared Chiabotti pushed the lead back to double digits, 82-71, with less than a minute remaining, virtually sealing the victory.
“We knew they were going to make runs. We said it at halftime and we said it again on our last time out that this team is going to make a run on us, and our guys weathered it,” Kleppe said. “We handled the ball well and we limited our turnovers when they dialed up the pressure to get back on us. We showed a lot of composure out there.”
Another key to the win was an emphasis in the second half to get more aggressive on the boards, Kleppe said.
“The biggest thing I talked about at halftime was that this game might come down to guard rebounding,” Kleppe said. “Our guys did an excellent job of getting in there. Alex (Hartway) and Jared and T.J. (Chiabotti) had some monster rebounds, and Davis came in off the bench and grabbed two key ones.”
Morrison collected a double-double with 14 points and 14 rebounds, and Jared Chiabotti also pulled down ten rebounds. Brenden Chiabotti was the other Grizzly double-digit scorer with 10. North Woods put this game away at the free-throw line, where the Grizzlies were a collective 20-for-35 on the night, ten more than Moose Lake.
Northland
The Grizzlies were back to the races again Friday at Remer with a 35-point romp over the Northland Eagles, 103-78.
T.J. Chiabotti had the hot hand in this one, going 13-of-23 from the field with four three-pointers and 31 points.
But the senior guard had plenty of help with four other Grizzlies scoring in double figures, including Morrison with 18, Brenden Chiabotti with 13, Burnett with 12, and Jared Chiabotti with 11. Collectively, the Grizzlies hit 59.4 percent of their shots from the field, including 40 percent from three-point range, and went 11-of-14 from the free-throw line, a season-high 79 percent.
Through six games, the Grizzlies have outscored their opponents by an average margin of 88-54. They’ve hit 49 percent of their field goals and generated an average of 30 points a game off turnovers, while limiting their opponents to just 37 percent shooting.
Next up for the Grizzlies will be the Granite City Classic holiday tournament on Dec. 29-30. North Woods will take on Nevis at 4 p.m. on Dec. 29, and Ashby at 12:30 p.m. on Dec. 30. Both games will be played at St. John’s University in Collegeville.