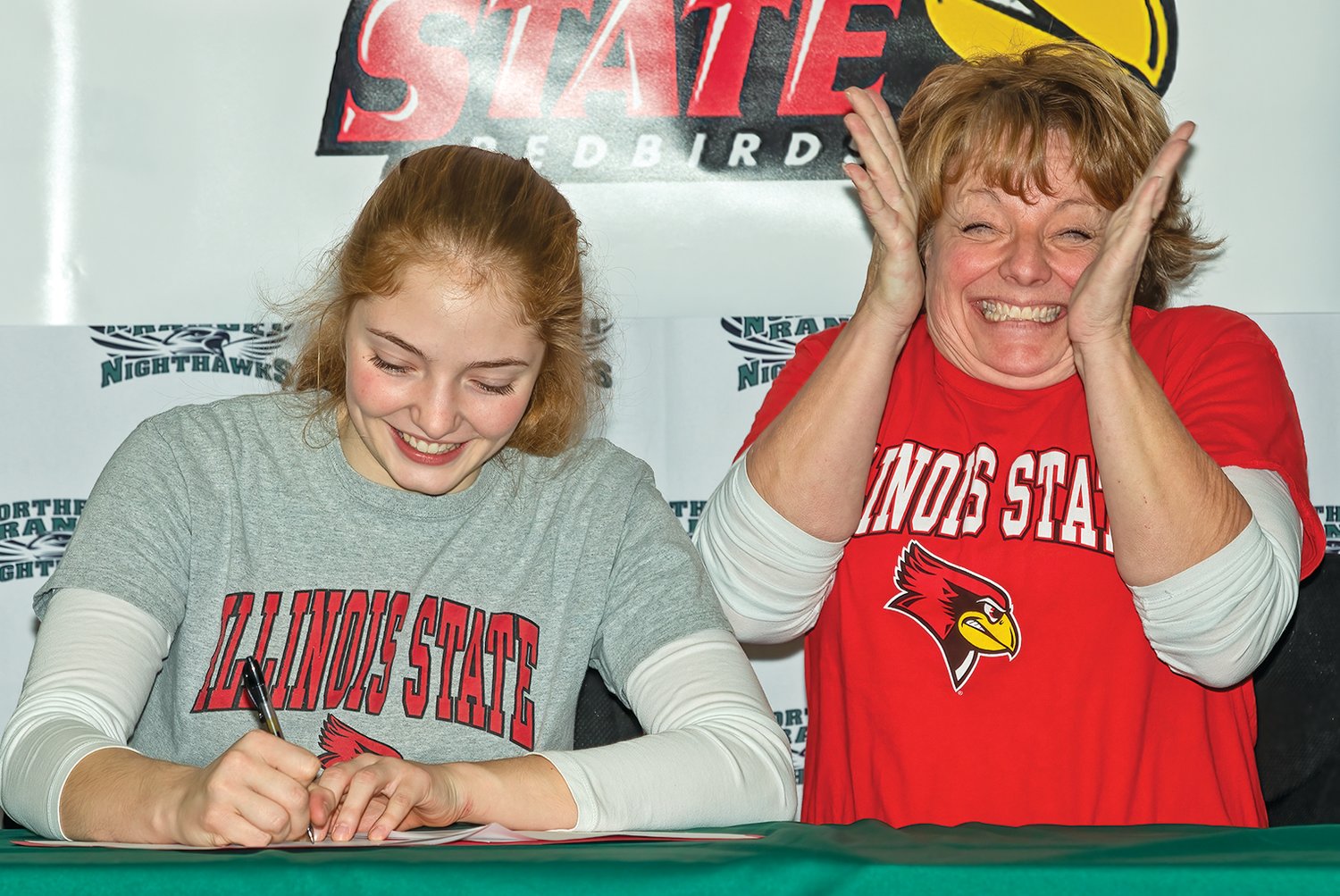 Hannah Reichensperger smiles as she signs her letter of intent to play for Illinois State. Meanwhile, her mom and coach, Jodi, can barely contain her excitement.
D. Colburn

BABBITT- Committed verbally since last year, Northeast Range standout senior volleyball player Hannah Reichensperger made her future college plans official on Monday by signing a national letter of intent to play for NCCA Division I Illinois State University next fall.
Reichensperger will be switching allegiance from one bird, the Nighthawks, to another, the Redbirds, as she joins new recruits from Kansas, Iowa, and Canada at the Missouri Valley Conference school, winners of the past two MVC conference tournament championships with three consecutive appearances in the NCAA tournament.
“We are so proud of Hannah and the entire class,” said Jake Barreau, Redbirds associate head coach and recruiting coordinator. “They are joining our program at a fantastic time. Above all else, Hannah and her fellow classmates are top-notch human beings, and we can’t wait to make some memories in the Red and White!”
Hannah was equally enthusiastic about joining the Redbirds.
“I’ve felt the excitement for it for the past year now, so I’m just super excited to finally put it on paper,” she said. “Their core values and everything that they work towards as a program is everything I’ve worked toward just growing up here. Their core values, growth, tradition, and service, it’s what I’m about, being your best self, growing for the people around you, serving the people around you so they can grow into their best selves, and then keeping up with the tradition of winning and being successful.”
Hannah also spoke highly about the ISU coaching staff.
“They’re the greatest coaching staff I’ve ever met,” she said, “the best coaching staff in understanding that they’re not coaching just athletes, but we’re students and people as well. I’m super excited to be a part of the Redbird family.”
Hannah’s path to Illinois State was far from traditional, as the COVID-19 pandemic caused severe disruptions to the normal collegiate recruiting process.
“Hannah actually came on our staff’s radar through a mass email/recruiting service,” Barreau said. “Recruiting was different and much tougher throughout the pandemic with far fewer tournaments and coaches not being able to go out and evaluate in person. Her process was probably a bit different than most. We trusted her pedigree and what we saw on video.”
That pedigree continued to grow this year with additional honors Hannah received. The American Volleyball Coaches Association tapped her for three awards, the All-Region 7 team, All-American Honorable Mention, and first team “Best and Brightest” designation for academic excellence, with Hannah’s 4.0 grade point average easily exceeding the 3.7 GPA minimum. Hannah also was named to the Minnesota Class 1A state first team, a well-deserved honor after leading the Nighthawks to their first-ever sectional championship match this season.
Hannah has also developed her skills and built her resumé through years of competing on the national circuit with Duluth-based Minnesota North Volleyball Club. Her fellow ISU recruits have similar experience, something Barreau said has become the norm for collegiate programs.
“It certainly gives her continued experience year-round and a higher level of competition,” he said.
Northeast Range Head Coach Jodi Reichensperger has been Hannah’s coach almost as long as she’s been her mother, and Monday’s signing ceremony was somewhat of a conflicted, bittersweet moment for her.
“It’s sweet because this has been her dream and I’ve watched it unfold for her,” Jodi said. “This is what she wanted, and she fought and fought until she got it. It’s bitter because I know what it means come June, because she’s going far, far away from home.”
Hannah also expressed a little bit of anxiety about moving more than 500 miles away from home but felt confident it would all go well.
“It’s a little intimidating,” she said. “I have grandparents right outside of Chicago, so it’s nice to have someone there. And it’s really only a 90-minute flight away. I know a lot of good people there at the college from throughout the recruiting process. I know that they’ve got me and I’m not too worried about it.”
Barreau is also confident about Hanna making the transition to the Normal, Ill., campus.
“College and collegiate athletics is always a shock to the system, regardless of where you come from, but we try to do a great job of naming those challenges and transition phases and addressing them from the onset so the student-athletes know to grant themselves grace and allow themselves time to find their new normal,” he said.
Meanwhile, Hannah will be back on the volleyball court again well before she takes the floor for her first practice at Illinois State. Minnesota North tryouts were this past Sunday, and no one gets a pass just because they’ve played there before. Hannah came through with shining colors, landing a spot on the 18-1 national team, with a season-culminating trip to either the USA Volleyball or Amateur Athletic Union national tournament.
Jodi will likely be an assistant coach for that team, and she’s looking forward to one more tour to watch her daughter develop.
“I’ve watched her rise to that level where she was recruited by this list of Division I schools, and she hasn’t peaked yet,” Jodi said. “She just keeps getting better. She floored me at club tryouts. She never ceases to amaze me. And she’s such a good kid. She makes it her job in life to lift people up around her. She’s a teacher’s assistant with the elementary gym class, and that’s where I just pulled her from (for the signing). If she has the time, she gives it. That’s who she is. And she’s going to a new nest, the Redbirds nest. I’m very comfortable with that nest.”