REGIONAL— Deer hunters across the North Country are reporting seeing fewer deer and hearing fewer shots than at any time in recent memory, and that perception is bolstered by some of the lowest … 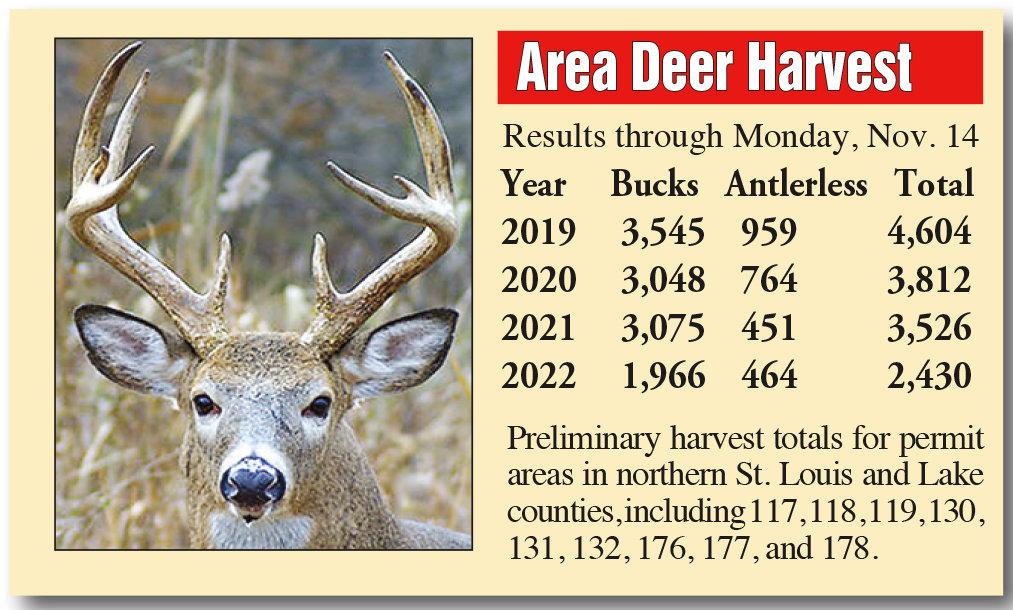 REGIONAL— Deer hunters across the North Country are reporting seeing fewer deer and hearing fewer shots than at any time in recent memory, and that perception is bolstered by some of the lowest deer registrations in years in the region through the second weekend of the regular firearms deer season in northeastern Minnesota.
While hunters still have until a half hour after sundown on Sunday, Nov. 20, to bag their deer, the vast majority of deer are typically harvested in the first two weekends. And cold temperatures forecasted for the weekend, with highs in the mid-teens and lows around zero will likely limit the time many hunters will remain in their stands for the final weekend.
Through the second weekend, hunters had registered a total of 2,430 deer in the nine permit areas tracked by the Timberjay. That’s down 31 percent over the same time last year and close to 50 percent below numbers from three years ago at this same point in the season.
Many hunters in the region say they have little doubt what’s behind the apparent decline in the area’s deer population.
“A conversation with any deer hunter in northeast Minnesota will bring up wolf numbers in their hunting area,” said Mike Hanson, a retired DNR forester in the Cook area.  “The DNR calls this ‘anecdotal information’ and seems to discount it but even if you took all those bits of anecdotal information and divided it in half there would still be a wolf problem! ”
DNR wildlife officials insist that the recent moderate-to-severe winters have taken the biggest toll on the deer population in the region. The lowest registration numbers do appear to track with those permit areas that experienced the highest winter severity index last winter. While deer registrations are down sharply in northeastern Minnesota, areas to the south and west, where conditions were somewhat milder last winter, the falloff in deer registrations is not as stark. That’s despite the fact that those areas are also located within the state’s primary wolf range.
Three of the permit areas that experienced the highest WSI last year have seen some of the most dramatic drops in deer registrations. Permit areas 130, 131, and 126, have seen a combined total of 141 deer registrations through the first two weekends, according to data posted on the DNR’s website. That compares to a total of 423 registrations through the full season in 2021. And 2021’s total was far below the 1,157 registered deer in these same three permit areas as recently as 2017. Those three permit areas have seen three severe, one moderate, and one mild winter over the past five years.
DNR wildlife officials have also pointed to intensive timber harvesting, which they say has reduced the amount of snow shelter, or thermal cover, in many areas. But Hanson suggests that the impact of spruce budworm has probably played a bigger role in depleting balsam fir and spruce on the landscape than timber cutting.
Biologists acknowledge that wolf predation is part of the picture, but point out it’s not something they can currently control. Despite a hefty population in the state, gray wolves remain on the federal threatened species list in Minnesota as a result of recent court cases that overturned federal efforts to delist the species.
Wildlife managers say that deer remain relatively abundant throughout a significant portion of the wolf range in the state and note that deer populations have shown an ability to bounce back fairly quickly as a result of mild winters and restrictions of deer harvest to limit population declines. Those restrictions include limiting hunters to bucks-only or to a limited number of antlerless permits, since deer breeding success is primarily dependent on the number of adult does.
“Wolves are not the sole contributor to deer population declines. However, their impact in combination with other factors, can contribute to local declines,” said Jessica Holmes, DNR Tower area wildlife manager.
This year’s exceptionally low harvest numbers in the region are likely to increase the pressure on the DNR to take steps to help the deer population recover, particularly in areas in the central and eastern portion of the Superior National Forest.