GREENWOOD TWP- Money is the key to bringing broadband internet service to Greenwood Township, but exactly how much probably won’t be known until a feasibility study is completed sometime next … 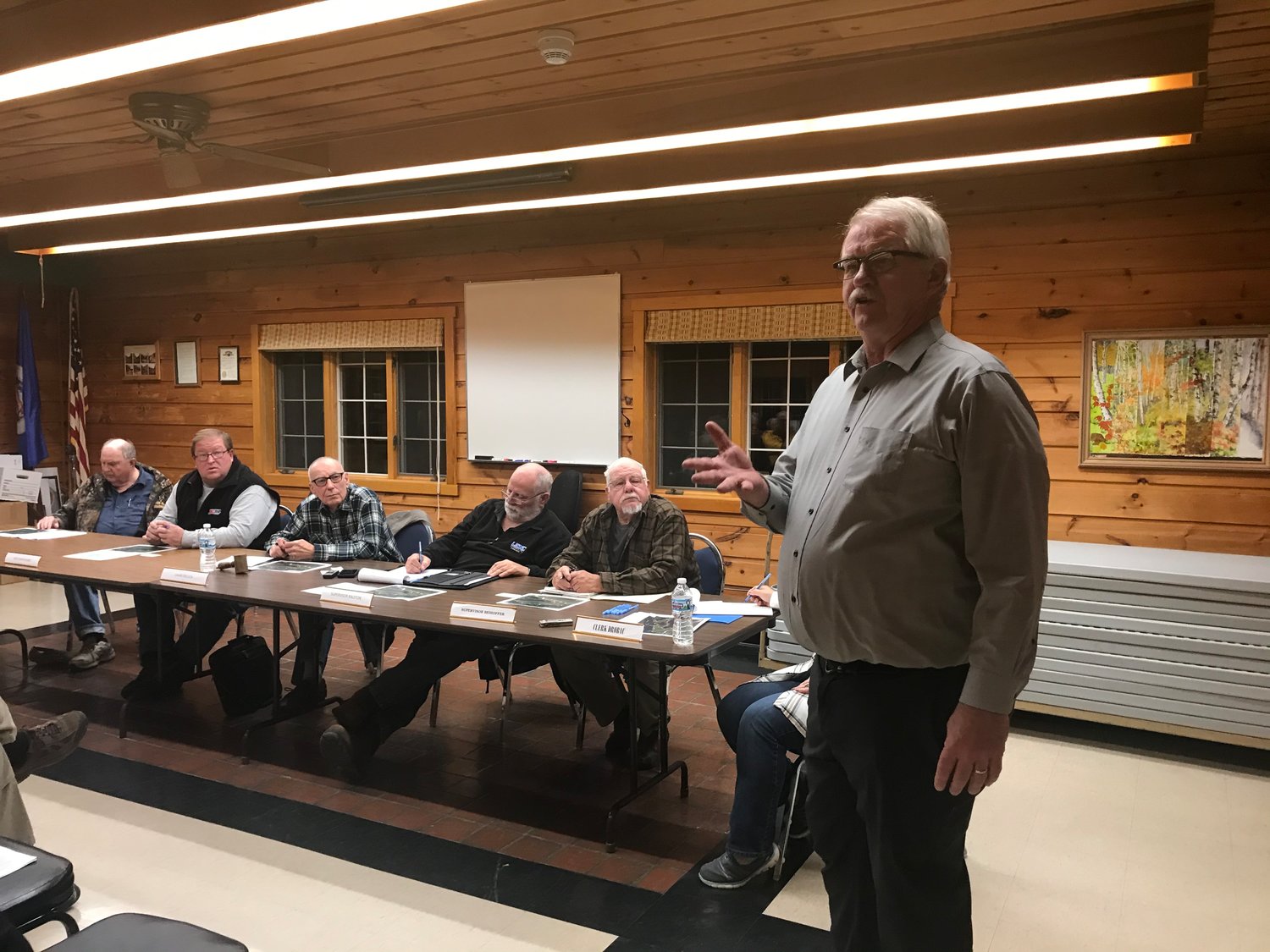 People want to come up here and work from their homes. But they are not coming. We need gigabyte service all over.”
Steve Giorgi

GREENWOOD TWP- Money is the key to bringing broadband internet service to Greenwood Township, but exactly how much probably won’t be known until a feasibility study is completed sometime next year.
“I have no clue to how much money would be needed,” said Scott Bohler, from Frontier Communications, the current designated telecommunications service provider in Greenwood and much of northeastern St. Louis County.
Bohler was one of over a half dozen local elected officials and representatives of telecommunications companies and state agencies who came to speak at a roundtable-style meeting here on Tuesday to discuss telephone and internet issues in the township. About 50 area residents filled the town hall at the Oct. 29 meeting.
Frontier currently supplies DSL level service in many areas of the township. “Most homes can get 10 mbps service,” said Bohler, “or a little higher if they are near a terminal node.”
For rural telecommunications providers, it comes down to numbers.
“Folks here are spread out,” said Bohler, noting that raises the cost per household for providing upgraded service. “State funding is vital in making the projects economically viable,” he said.
Fiber optic cable has already been installed in several of the more populated areas of the township, but at present, only the town hall has been connected to the broadband-level service. This fiber, installed by the Northeast Service Coop, stretches down Echo Point as far as the Bois Forte Reservation, down Birch Point, Moccasin Point, and toward Frazer Bay. But whether that fiber could be used to connect to individual homes and businesses in those areas is still an open question.
Audience members stressed the need for reliable service at speeds that would allow residents to work from home, having the township apply for state or federal grant funding to get a project started, and making sure the quality of internet service is sufficient for the needs of area businesses.

First steps
Speakers all agreed that conducting a feasibility study was the most important first step. That study helps to determine how many residences and businesses desire high-speed service, how much they can afford to pay, and exactly where they are all located in the township. The study is also a prerequisite for any request for any kind of funding application.
Such a study is about to begin, thanks to the efforts of the local Blandin Broadband Committee, which is being led in large part by Greenwood residents Joanne, John, and Kate Bassing. The township has committed to help fund the feasibility study, which ensures that data on Greenwood’s needs and residents will be part of the study. The Blandin Foundation is providing matching funds for this study and will host a kickoff event for the feasibility study on Nov. 8 in Aurora. The local broadband committee is partnering with two other groups on the East Range. They will be hiring an engineering firm to conduct the study and identify possible providers, as well as getting initial cost estimates. Then the next step will be to find sources of funding.
Joanne Bassing told the town board that Greenwood can send three people to be part of the feasibility group, either town board members or township residents.
Finding funds for such an effort could be a challenge. Rep. Rob Ecklund, who was the chief author of the bill funding the state’s Border-to-Border grant program, noted that the $20 million set aside for this year, and $20 million for next year, is nowhere near the amount needed to fund projects already in line for funding. He noted that the IRRR is able to provide some matching funding to projects that do receive other grants. There are also federal grants available for these projects.

Get organized and work
Townships that are organized and make a concerted effort to obtain funding are more likely to be successful, according to Steve Howard, from Paul Bunyan Communications, a co-operative headquartered in Bemidji. Howard talked about the effortsin Morcom Township, which was spearheaded by their township clerk, Sasha Lehto. Paul Bunyan is now partnering with Morcom to get service to that township.
“She was on the ball,” he said. “She got letters of support. She went door-to-door and got letters from over half the people there.”
Howard said their company is more than willing to work with local townships, but said there are many, many communities asking for help.
“But when she got that kind of support,” he said. “It was a real easy sell to our board of directors. You need to get fired up and push.”
Howard said they see a lot of people eager to move from major metropolitan areas to the rural north, and said many of them need more than 30 mbps service. “They also need high upload speeds,” he said.
Joe Buttweiler from CTC, a Brainerd-based cooperative that is already beginning to provide some service in the area, agreed that upload speeds are important. “Upload equals economic development,” he said.
Buttweiler told the crowd that it is important to plan for the future by getting technology able to support speeds higher than the goal of 100/20 mbps.
“Shoot for a big number,” he said. “Shoot for good technology.”
CTC has been working with Bois Forte on a broadband project for Vermilion Reservation to bring fiber to every home there. That project applied for state funding through the Border-to-Border program and they hope to get good news later this year.
Sidra Starkovich, who works for Bois Forte Planning and Community Development, said it is important to reach for the goal of 100/20 speeds right now.

Installation costs
Howard said it costs about $20,000 - $25,000 per mile to bury fiber optic cable, but that cost could double if the ground has bedrock, which is common in the area.
“It does make us cautious about working in this area,” he said. “They don’t call it the Iron Range for nothing.”
Howard said Paul Bunyan prefers buried cable, because it is more reliable than fiber on poles, which can be easily damaged during ice storms.
When asked, Howard said the typical residential customer pays about $60 per month for their most popular high-speed package, which comes with unlimited usage. Installation is free, he said, if the customer commits to a six-month contract, and their driveway is less than a half-mile long.

Priority for economic development
Steve Giorgi, director of the Range Association of Municipalities and Schools (RAMS) said that getting broadband to rural areas and small towns has been a priority of his group for the last three years.
“People want to come up here and work from their homes,” he said. “But they are not coming.”
Giorgi was recently appointed to a state broadband task force, and said RAMS is also lobbying St. Louis County to assist in a broadband application.
“We need gigabyte service all over,” he said.
Giorgi is also on the board of a statewide group that lobbies for rural broadband funding, and is trying to get the state legislature to add consistent funding for the Border-to-Border program, and also to increase the yearly allotment to try to start to match the demand from rural areas.
Rep. Rob Ecklund, St. Louis County Commissioner Paul McDonald, IRRR Commissioner Mark Phillips, Jon Loeffen from the Northeast Service Coop, and Whitney Ridlon from the IRRR also attended and spoke at the meeting.