Learn how to protect yourself from ticks 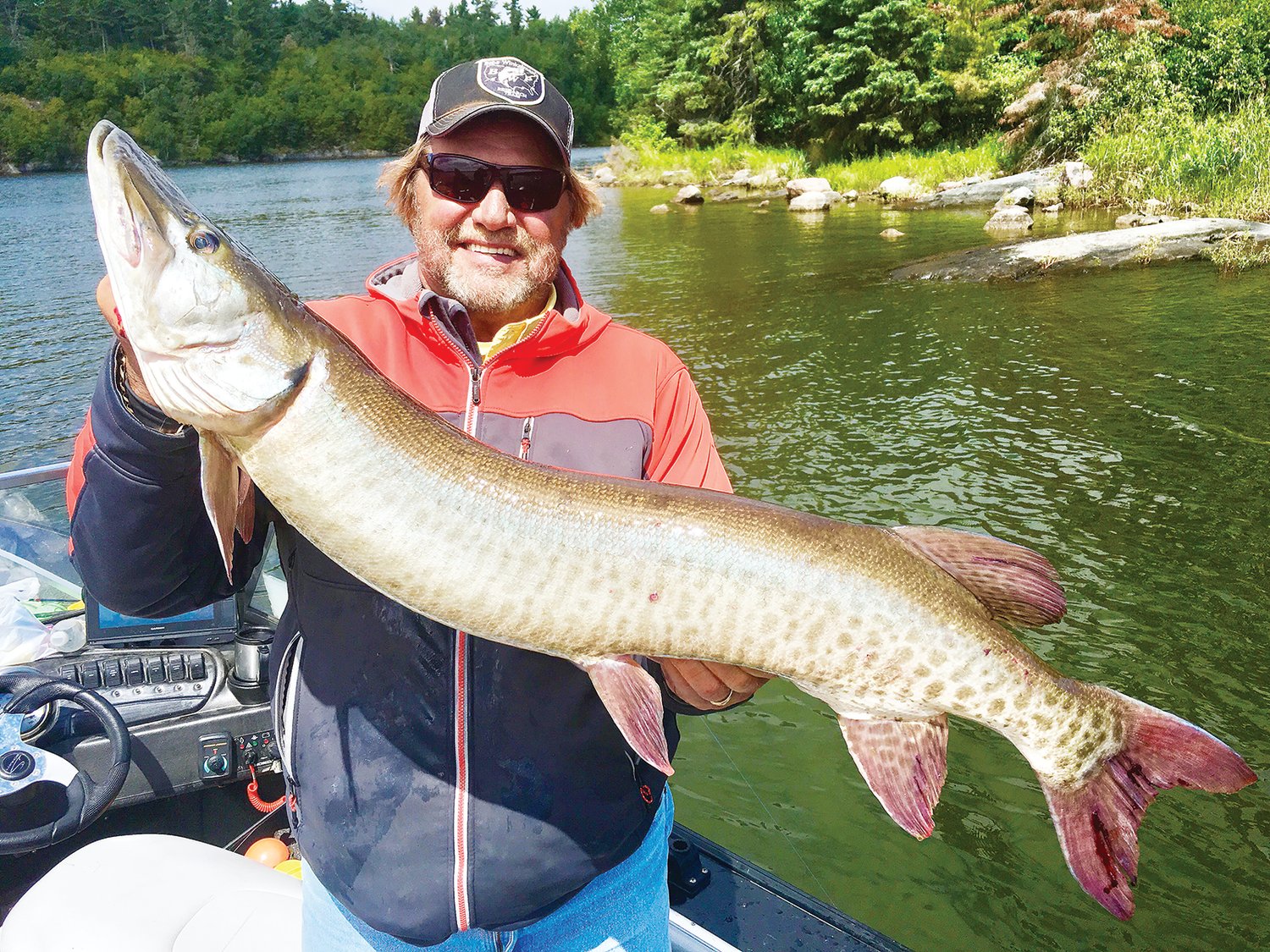 While Babe Winkelman is best known for his hunting and fishing shows, he is also becoming known for his work educating the public about the dangers of tick-borne illnesses.
Submitted photo 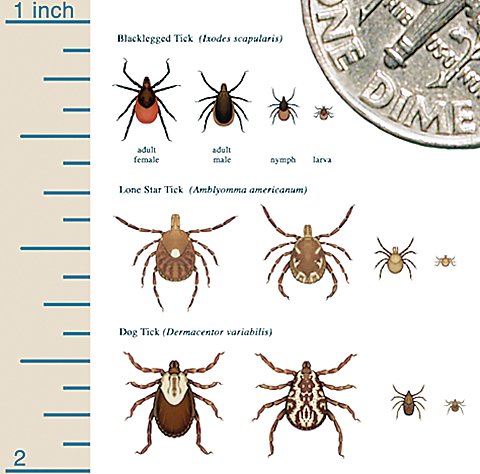 This picture shows each of the life stages of the black-legged tick: adult female, adult male, nymph, and larva. It also shows the relative sizes and patterns of the blacklegged tick, Lone Star tick, and American dog tick.
MDH
Previous Next
Posted Wednesday, April 8, 2020 7:34 pm

REGIONAL- Babe Winkelman is the only outdoorsman to be inducted into the Sports Legends Hall of Fame. Winkelman is well-known for his 40-plus year career on television, promoting fishing and hunting, as well as writing a nationally syndicated column of fishing, hunting and conservation that is read by millions.
But lately, Winkelman is on a crusade to teach everyone about something else – the dangers of tick-borne illnesses and how to prevent them. Black-legged (deer) ticks are now known as the primary vector to transmit Lyme disease to humans (as well as dogs). Other tick-borne diseases are becoming more common and can be transmitted by other tick species including the more common dog tick.
Tick season starts now. As soon as the snow begins to melt, ticks will become active, and local dog owners are already reporting finding black-legged ticks on their pets.
Black-legged ticks are tiny, and often find their way inside a home on dog fur. So even if you aren’t active in the outdoors, if you have a dog, you are at risk.
Winkelman was scheduled to come to Tower this week to give a free presentation on preventing and identifying tick-borne illness. He was invited by the local Lyme disease support group. The talk was canceled, due to COVID-19, but hopefully will be rescheduled at a later date.
Lyme disease is something that Winkelman is personally passionate about. Both he and three of his daughters have been affected, and some have had life-altering effects from the disease.
Winkelman said he was one of the first people to warn of the dangers of Lyme after contracting it for the first time in the late 1980s. At that time he was a spokesperson for Estes Johnson, the makers of Deep Woods Off insect repellent.
“It just bounced off everyone’s head,” he said, “at that time people thought ticks were just a damn nuisance.”
In a quest to find answers to his own health issues, Winkelman worked with doctors from across the country.
“I wanted to find the truth,” he said. “I feel like I got a college education in about two months learning about Lyme disease and its symptoms.”
Today, much more is known about Lyme and other tick-related diseases.
Winkelman said that prevention is the first line of defense.
“The first thing I tell people is that it is not anyone else’s job to educate you. You need to educate yourself for the sake of your family. You don’t want someone to get misdiagnosed.”
Ticks can be found all over, not just in woody areas, he said, and are often found on lawns and sports fields. And ticks are a danger from early spring to late fall.
Winkelman traces most of his family’s tick exposure to turkey hunting trips in the Midwest, in the spring. And while he thought he knew enough about proper protection, it turned out he was missing some vital information.
“We didn’t know we had to treat our clothing,” he said. “We were still covered with ticks every day.”
Winkelman said the advice about wearing light-color clothing so that ticks would be more visible is not that useful, because it doesn’t prevent ticks from crawling up the inside of your clothing.

Protect yourself
Winkelman said two products are important for your tick prevention toolkit.
Picaridin is an insect repellent that is safe to apply to skin and repels ticks for up to eight hours. DEET is a more popular insect repellent, but Winkelman said he prefers Picaridan because he believes it is more effective. Picaridan also repels mosquitos and other biting insects. Research studies indicate both are about equally effective against ticks.
Winkelman advises people to spray Picaridan, which is a naturally-based repellent, on all areas of their skin that are not covered with clothing that has been treated with his second recommended product, permethrin.
Permethrin is a repellent that is applied to clothing, not the skin. It is a natural insecticide, derived from the chrysanthemum flower, but often synthetically produced. It is not toxic when applied to skin, as it only lasts for minutes on the skin, but when applied in a solution to clothing it binds to the fabric and will stay effective for long periods of time. Outdoors clothing with the “Insect Shield” label is treated with permethrin that will last through 70 washes. You can even send your own favorite articles of clothing out to be treated professionally.
There are also spray solutions you can purchase to easily treat your own clothing that will keep them protected over multiple washes.
“Start with your socks,” he said. “Spray them down and let them totally dry, and then turn them inside out, spray again, and let them dry.”
Winkelman also treats his pants, long underwear, cap, shirts, gloves, and the outside of his shoes.
“If a tick crawls on permethrin-treated clothing, it will fall off dead within five or ten minutes,” he said.
“None of my family members have had any tick bites since we’ve learned how to treat our clothing and skin properly,” he said.
“We were out turkey hunting and saw ticks crawling everywhere,” he said. “Turned out we were standing on a nest of ticks. We watched them crawl on our shoes and then fall off dead.”

Tick bites
Daily tick checks are the simplest way to prevent tick-borne diseases. Ticks do not wash off in the shower. Be sure to inspect your armpits, back of knees, neck and ears, and around your waistband.
People also need to be very careful removing any tick that is attached to their skin.
“You need to slowly pull the tick straight out,” he said, “using a pair of tick tweezers or long-nosed tweezers.”
The important thing, he said, is not to squeeze the tick, which would cause any bacterium or viruses in the tick to travel into the opening in the skin, and to be sure to remove the tick’s head, which can be embedded in your skin.
Pets should be treated to prevent them from contracting tick-borne illness, as well as preventing them from bringing live ticks into the home. Winkelman said he has seen very good results using the Bayer Seresto brand tick collar. There are also many brands of tick medications that protect dogs available at your local veterinary clinic.

Tick-borne
diseases
People can be infected with Lyme disease whether or not they develop the characteristic bull’s-eye rash, which used to be considered diagnostic.
Winkelman said he has only developed a rash one time from a tick bite that gave him Lyme disease, and in that case, the rash was rectangular in shape. The other two times he didn’t get a rash but did test positive for Lyme.
Winkelman said he feels the medical and insurance establishment has been willing to recognize issues related to chronic Lyme disease, which can be life-altering. “It is horrific what chronic Lyme does,” he said, noting that one of his employees died from complications of chronic Lyme.
In addition, he said, there are many other tick-borne illnesses that are just starting to be diagnosed and understood. His website has links to home tick testing kits (to test the actual tick for pathogens).
“The responsibility lies on you for the health of your family,” he said.
Winkelman said there is some promising news on the horizon, including a rapid test that can be done at a doctor’s office and gives results in 15 minutes. There are also some new treatments being tested that may help prevent the spread of the disease by killing the pathogen in wild mice, that are vectors which spread the pathogen to ticks.

Resources
 Permethrin-treated clothing is available. Look for outdoors clothing with the “Insect Shield” label. Mail in your clothes to have them professionally treated to repel ticks: https://www.insectshield.com/IS-Your-Own-Clothes-P338.aspx.
 For details on how to treat your clothes and shoes with permethrin at home visit https://www.winkelman.com/tick-borne-illness-information-center/. Permethrin sprays are available locally at many area retailers; look for the Sawyer brand.
Please note: Permethrin is toxic for cats, so cats must avoid contact with permethrin-treated fabrics.
 Picaridan is available locally at many retailers; look for Sawyer brand repellents. It is considered safe for ages six months and older, including pregnant women, and does not damage plastic or synthetic coatings.
 To purchase a specially designed tick removal tweezer: https://tickease.com/product/tickease-tick-removal-tweezers/.