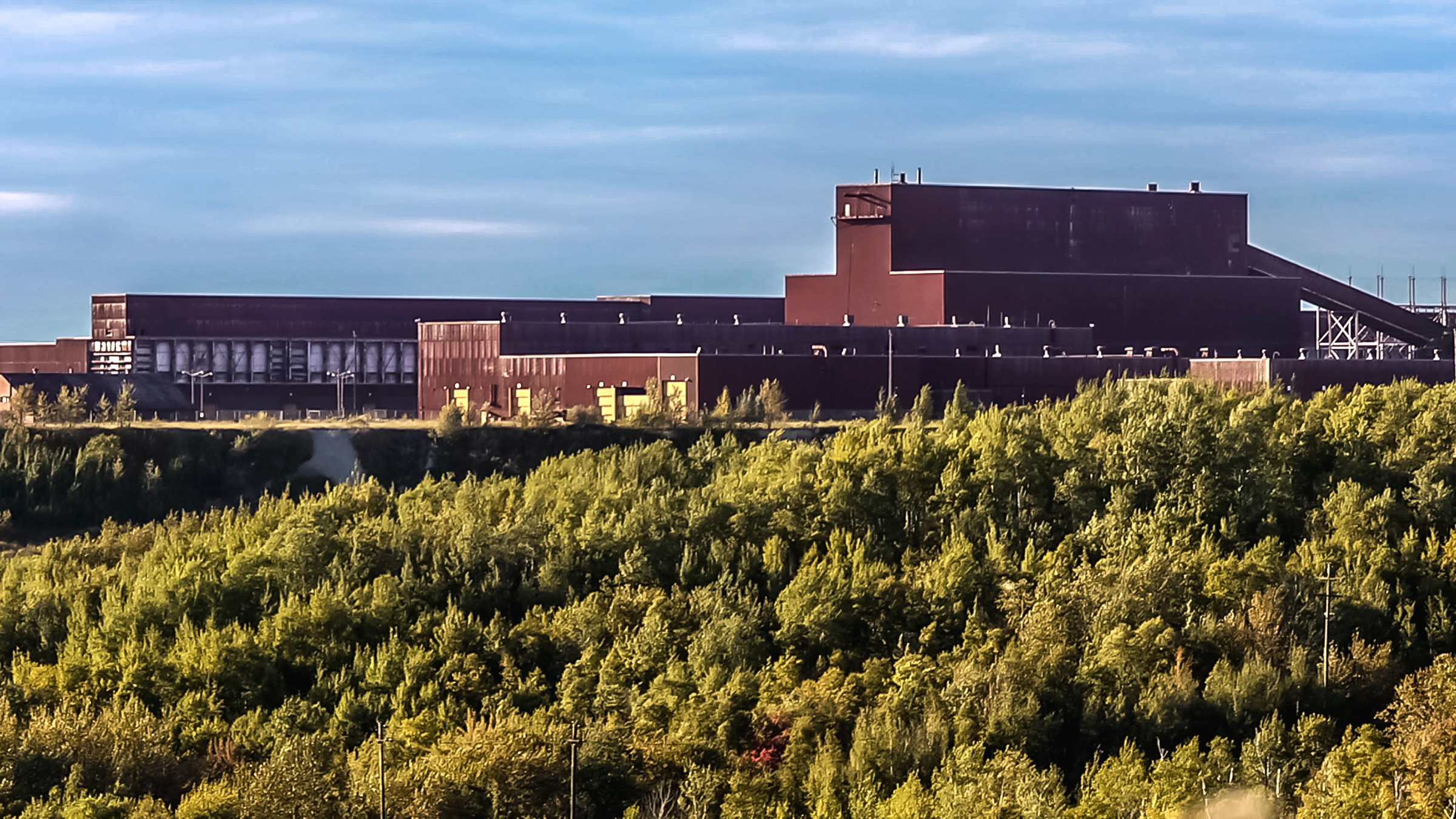 An aerial view of the former LTV processing plant, which PolyMet proposes to refurbish for its planned copper-nickel mine.
courtesy PolyMet Mining
Posted Wednesday, January 18, 2017 4:11 pm

REGIONAL— The state of Minnesota should require PolyMet Mining to provide an updated financial feasibility study and cash flow analysis prior to approval of the financial assurance provisions for the company’s proposed copper-nickel mine near Babbitt.

That’s the recommendation of financial consultants hired by the Department of Natural Resources last year.

The agency hired Twin Cities-based Emmons Olivier Resources, or EOR, to provide guidance to the state as it negotiates a financial assurance package with PolyMet to ensure that state taxpayers aren’t left with the financial costs of future clean-up and pollution control at the proposed mine.

The consultants believe the state needs more financial information in order to assess the degree of risk it will assume if it grants the necessary permits to allow PolyMet to build the mine. “This is critical to determine the risk of PolyMet not meeting their financial assurance funding obligations,” said the consultants in their report, issued in late 2016 and posted earlier this month on the DNR’s website. The financial assurance package would be one part of the company’s overall permit to mine.

Yet DNR officials say they have not requested the financial feasibility study recommended by their consultants, at least to date, and it is unclear whether the agency will ultimately do so. “At this point, we are focused on reviewing the engineering and technical details of the proposed permit application as well as the proposals and calculations for financial assurance,” said DNR Assistant Commissioner Barb Naramore. “If our work suggests that elements of the financial feasibility study need to be updated to inform our decision making, we will request those updates from the company.”

PolyMet spokesperson Bruce Richardson said the company is planning to produce an updated definitive feasibility study—which would include revised financial information— but only after the DNR has issued its draft permits to the company. “Our plan is to complete an updated study tied to detailed project design, which will be part of the draft permits,” said Richardson.  “In other words, we want to base our study on everything that will be in the permits and not have to speculate on what the state may or may not include in them.”

While the DNR’s consultants believe that the PolyMet proposal is economically viable “for most metal pricing and cost scenarios,” they note that as a junior miner without substantial assets or previous track record, the company may have difficulty in obtaining some types of financial instruments, such as surety bonds, that mining company’s typically use for such purposes.

“Due to numerous mine bond forfeitures that caused considerable losses to the surety industry, it has now become more difficult for mining companies to obtain surety bonds,” noted the consultants in their report. “For a small or new mining company like PolyMet it would be very difficult to obtain a reclamation bond if there is any risk of bankruptcy, which would be indicated if the financing or economics are not solid. It would be even more difficult to find a surety willing to guarantee a long-term financial assurance liability unless the project’s economics are very strong.”

If PolyMet is unable to obtain a surety bond, it would likely require that the company post up front capital and “that could harm the project’s feasibility,” according to the consultants.

The prospects of obtaining a surety bond might be improved were PolyMet’s primary partner, Glencore, a Swiss-based global commodities broker with significant assets, to assume ownership of the project or assume a portion of the liability. To date, however, PolyMet officials have indicated their desire to bring the project forward under current management and express confidence in their ability to do so. PolyMet spokesperson Bruce Richardson indicated that the company currently expects financial assurance funding would “be available through a combination of cash in a trust, surety bond, irrevocable letter of credit, certificate of deposit, or some combination of these or other instruments.”

At this point, stated Naramore, the DNR has made no decisions regarding the timing and types of financial assurance.

If PolyMet does intend to fund its financial assurance obligations itself, the consultants note that their ability to do so will be largely dependent on the cash flow generated from the sale of metals produced at the mine. That’s why it’s critical for the state to understand the cash flow picture much more clearly than it does at present, according to the consultants. “To inform this decision and assess the risk of PolyMet not meeting its annual trust funding requirements, access to an updated financial feasibility study and cash flow projections is paramount,” stated the consultants.

Complicating the issue is the fact that the company will likely need two separate financial assurance packages, according to the consultants, one for shorter-term mine reclamation, with a second package to cover the permanent costs of water treatment and site maintenance, which is expected to last for centuries given the long-term risks associated with sulfide-based minerals and associated acid rock drainage. The consultants suggest a perpetual trust may be one means of providing for permanent water treatment at the mine site.

According to the consultants, the revenue potential of PolyMet’s proposed NorthMet mine is “very sensitive” to the prices of copper and nickel, which have fluctuated significantly during the course of development of the project. Under the company’s current plan, the NorthMet mine is expected to produce 72 million pounds of copper, 15 million pounds of nickel, 727,000 pounds of cobalt, 75,000 ounces of palladium, 20,500 ounces of platinum and 9,500 ounces of gold annually.

Current prices for both copper and nickel remain well below PolyMet’s price assumptions for its mid-range financial projection, produced in 2008, which had suggested a robust 30-percent return on investment. That projection assumed a copper price of $2.90 per pound in 2008 dollars.

Today’s copper price, adjusted for inflation, equals just $2.31 per pound in 2008 dollars. Nickel prices have fallen far more sharply, to levels well below any of the projections made by PolyMet.

The company’s same 2008 financial projection pegged nickel at $12.20 per pound. Yet today’s nickel price of $4.74 per pound equals just $4.23 per pound in 2008 equivalent dollars. That’s a significant deterioration for a metal that was projected to account for over one-third of the total resource value from the PolyMet mine.

In the company’s 2008 financial update, the company projected generating $166 million annually on nickel alone. Based on nickel prices from mid-2016, however, the consultants indicate annual nickel revenue at a far less robust $37.7 million. While the 2008 PolyMet report pegged annual revenues at $441.7 million, the consultant’s scenario, based on mid-2016 metal prices, predicted total revenue of $265 million. That’s still slightly better than the $259.1 million that the company projected in revenue in its initial 2006 feasibility study.

For PolyMet, the cost to refurbish its processing facilities, tailings basin, and open its mine remain one of the key risk factors for the project, according to the DNR’s consultants. A 2013 report put out by PolyMet pegged its capital costs at $602 million, but that did not include several other potentially significant expenses, such as the cost of stabilizing the tailings basin embankments, as well as the costs of the legacy environmental obligations on the former LTV property that PolyMet will assume should the DNR issue a permit to mine.

PolyMet could reduce its capital costs by nearly $300 million by delaying construction of its own hydrometallurgical facility. That would require that the company complete the processing of metal concentrates elsewhere, most likely through a contract vendor. That would reduce the upfront capital costs, but could raise the operational costs or reduce the revenue potential of the project.

Other factors, such as higher interest rates for the company’s outstanding obligations, could also impact the profit potential and cash flow from the PolyMet mine.

The financial assurance would provide funding for a wide range of costs associated with reclamation, long-term water treatment and site maintenance, legacy costs associated with holdover pollution problems at the former LTV taconite facility, and a variety of contingencies, such as a tailings dike failure or similar disaster.

The DNR is expected to require a fairly substantial up front financial commitment with annual increases for the first decade or so of mine operation. “The law requires that the appropriate level of financial assurance be in place before any activity (construction or operations) begins,” stated PolyMet’s Richardson. “PolyMet is required to purchase these financial assurance instruments prior to any future work being performed. For example, if mining were to cease in year 10,

PolyMet would have acquired and provided to the DNR the financial assurance obligation for year 10 in year 9 of operations to cover whatever closure, reclamation and post-closure water treatment costs that would be present at the end of year 10 to fully reclaim and close down the site.”

In later years, assuming PolyMet completes scheduled reclamation on an ongoing basis, the amount of reclamation liability could actuall decrease until final closure. At that point, substantial financing for long-term water treatment and site maintenance would still be required.