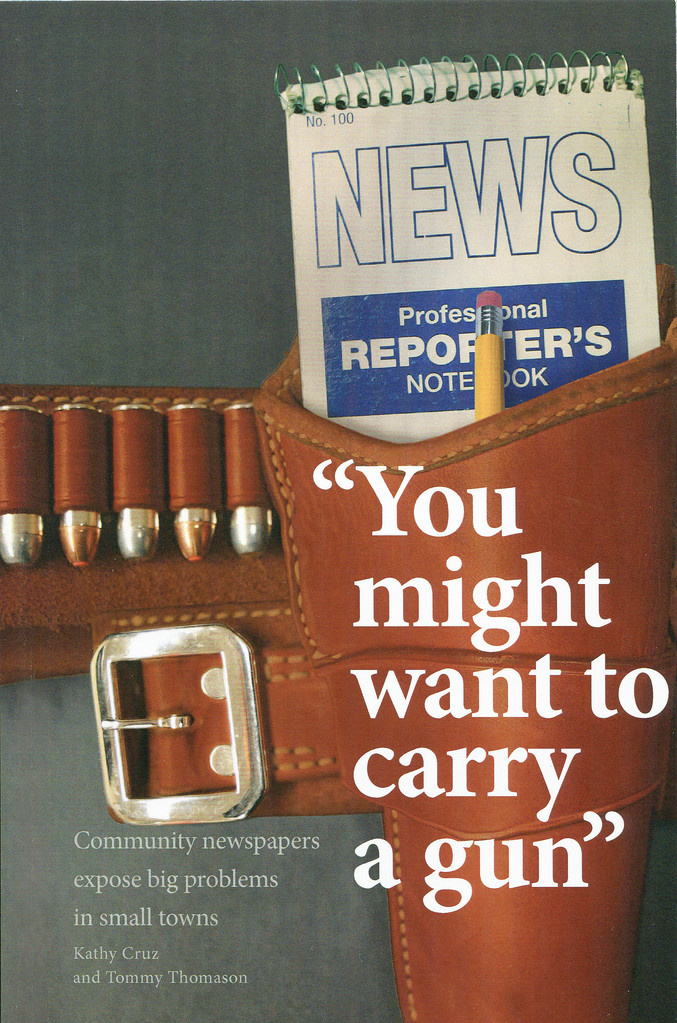 REGIONAL— A new book that highlights small town papers that took on big stories includes a chapter on the Timberjay, and the newspaper’s longstanding fight to shine a light on the activities of corporate behemoth Johnson Controls.

The book, “You might want to carry a gun: Community newspapers expose big problems in small towns,” highlights the work of nine community newspapers around the United States that have exemplified the watchdog role undertaken by often unheralded investigative journalists.

Written by Kathy Cruz, an award-winning reporter, formerly with the Dallas Morning News, and Tommy Thomason, the director of the Texas Center for Community Journalism in Fort Worth, the book lauds the courage and the commitment of those few small town journalists who have taken on major institutions and power structures in their quest to serve readers and uncover the truth.

“Investigative reporting isn’t easy in the best of circumstances,” writes Mark Horvit, Executive Director of the international organization Investigative Reporters and Editors, in a foreword to the book. “It involves uncovering truths that someone in power doesn’t want public. It requires asking uncomfortable questions of community leaders. It means not taking no for an answer, even when the person saying no is a mayor. Or a governor. Or a sheriff. It makes people mad.”

While each story is unique, the nine papers and their reporters showcased in the book share the same tenacity. Take the case of Samantha Swindler and Adam Sulfridge, who teamed up on an investigation at a small Kentucky newspaper that exposed a corrupt sheriff, who used his position to traffic in guns, illegal drugs, and extortion prior to his arrest in 2011. Despite the mountains of evidence published by the newspaper, the community reaction was mixed, and the two reporters faced death threats, most likely coming from those who were benefitting from the sheriff’s illegal schemes.

Investigative journalism can be a thankless task, notes Thomason. “These journalists are professionals who’ve made some hard choices. They’ve chosen to pursue big stories, working late into the night and on weekends because there was no extra staff to cover cops or the local school board. They’ve endured finger-pointing and whispered comments as they took their seat at church or at a local restaurant— there’s no anonymity in community journalism. And all too often, their investigative series causes negative advertiser reaction, winning awards from the state press association but costing their own papers thousands of dollars in lost advertising and cancelled subscriptions.”

In some cases, the reporters highlighted in the book received death threats. At least one was advised that she might want to carry a gun.

While the reporters at the Timberjay aren’t packing heat (except during deer season), the paper was featured for mounting one of the biggest political mismatches on record, pitting the small town publication against Johnson Controls, a massive multinational corporation with more than 130,000 employees worldwide.

The book recounts the history of the Timberjay’s legal battle with JCI, but the book’s publication deadline passed before the Minnesota Legislature wrote the final chapter in that fight, essentially overturning the impact of the Supreme Court’s decision in favor of JCI.

The chapter on the Timberjay also recounts the paper’s origins and publishers Marshall Helmberger and Jodi Summit’s long tradition of taking on tough subjects, and reporting stories that sometimes upset those in power. Even so, the paper took on big stories, and won major awards for reports on the lack of dental care for low-income residents, police mistreatment of a transgendered person, and failures in the St. Louis County child protection service.

“But when [Marshall] Helmberger took on Johnson Controls, people throughout the United States began to notice the courage of this little Minnesota community newspaper,” writes Thomason, who takes note of the paper’s unusual name. “In the world of U.S. newspapers, which so often share the same name— Times, Journal, Gazette, Post, News, Daily, Press, Sun, Star, Record and the like— the name Timberjay is unique,” continues Thomason. “Its namesake is a north country bird sometimes called the gray jay, which is known to thrive in cold, remote, forested areas. And it’s also known as a bird of innate curiosity. It’s an appropriate name for Marshall and Jodi’s paper, which keeps asking questions, even when arrayed against formidable opposition.”

The book is available for $15, from Kendall Hunt Publishers. It will be available on Amazon within the next few weeks.