The pups were flown in from Canada … 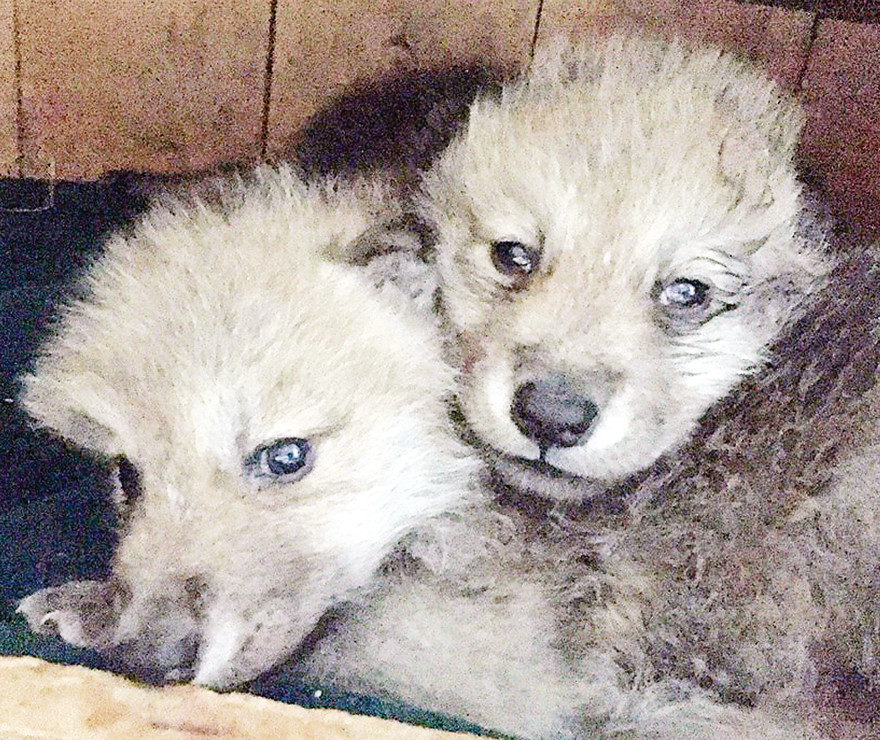 The pups were flown in from Canada last Wednesday and after landing at the Ely Municipal Airport, undergoing a quick health check from local veterinarian Dr. Chip Hanson, and clearing inspection from U.S. Customs and the U.S. Fish and Wildlife Service, they were transported to their new home at the Wolf Center and spent most of the Memorial Day weekend quarantined in the facility’s new wolf pup care center.

“We keep an eye on them every hour of every day and record all their activities, which is mostly eating and sleeping right now,” said IWF Wolf Curator Lori Schmidt on Tuesday morning.

Two wolf care volunteers are with them for six hours at a time around the clock. “We are like a couple of nannies,” said Kathy Altman, who was working with Cindy Olk as Schmidt prepared a webinar to introduce the pups to the Wolf Center’s Internet audience.

The caged care center is made to look natural with pine boughs on the wall. Logs, stumps and branches are placed on the floor covered with dirt, pine needles and straw. The temperature in the enclosure is kept fairly warm because the male pups, born on May 2, still have their downy fur and are vulnerable to cold temperatures as their guard fur grows in, Olk said.

“If they’re not sleeping, then they are eating, peeing or pooping, and playing,” Altman said. “They are eating a gruel-type food right now that is a special nutrient-rich formula that resembles the regurgitated food that would come from their mother or other pack members.”

Care center volunteers record everything they do as it happens, including how much they eat, how long they urinate, and how they interact with each other and explore their surroundings. “But mostly right now, they sleep,” Olk said.

Wolf Center staff began conducting pup care programs on Memorial Day. Visitors have a chance to meet the pups during four daily programs. “They just started yesterday and they are a bit tuckered out,” Olk said. “They had a big day on Memorial Day.”

During the pup programs, held in the auditorium, the ambassador wolves stand with their noses at the windows watching them intently. “They know they are here, and they are very curious,” Altman said. The pups will be gradually introduced to the pack over the summer and will be put into the enclosure in the first part of August, Schmidt said.

The pups are already much larger than when they arrived on May 25. They gain about a half-pound a day and are getting more active and curious. “They remain in a critical stage of development right now and we are watching them very closely,” Schmidt said. She has worked with new wolf pups since 1986, about every four years. “We learn new things every time we get new pups. Each time is different because they all have different personalities.”

The Wolf Center staff gave the pups temporary names of Axel and Grayback. A naming contest will be held soon. Webinars are planned this summer to update the public on the growth progress of the pups.

For more information, go to www.wolf.org. There is also a webcam on the wolf center’s website showing live wolf pup care center activity.