No hitches on race day

ELY- While turnout for the Ely Marathon and the Boundary Waters Bank Half Marathon was a bit lighter than normal, 548 runners plunked down the registration fees to compete in friendly weather …

No hitches on race day 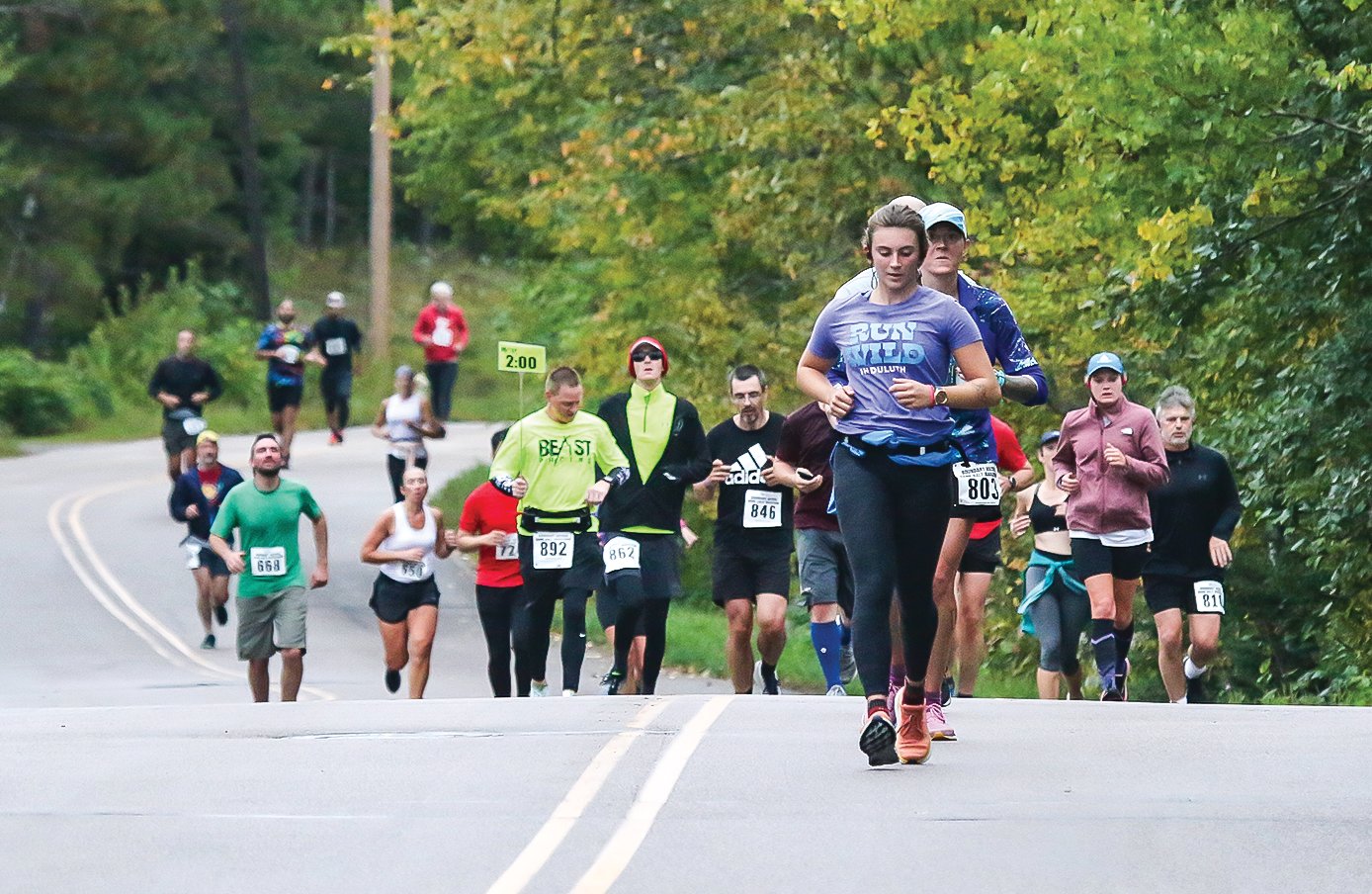 A large pack of half marathon runners made their way along Pioneer Road on Saturday.
M. Helmberger 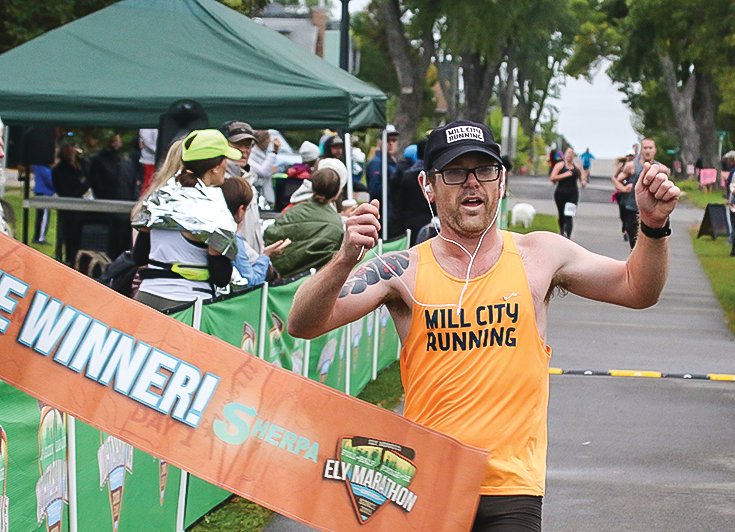 Robert Henderson, of Minneapolis, was the top finisher in the full marathon.
M. Helmberger 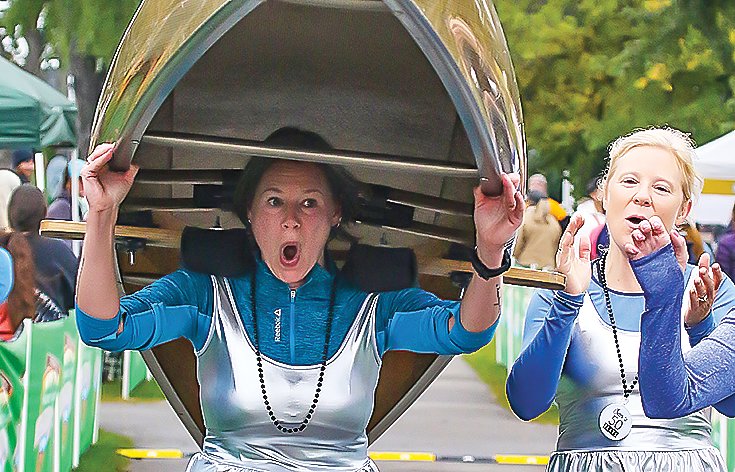 A member of the Team Paul Rudd canoe portage relay squad reacts as she comes across the finish line.
M. Helmberger 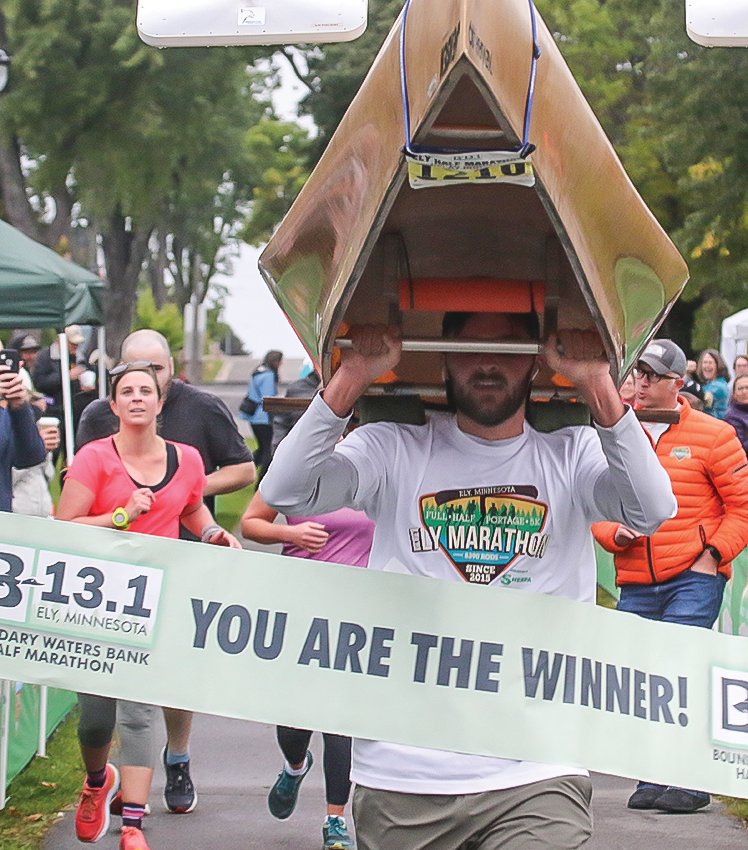 The final member of the “Are We There Yet?” half marathon canoe relay team makes it to the finish line with a time of 2:33.11.
M. Helmberger 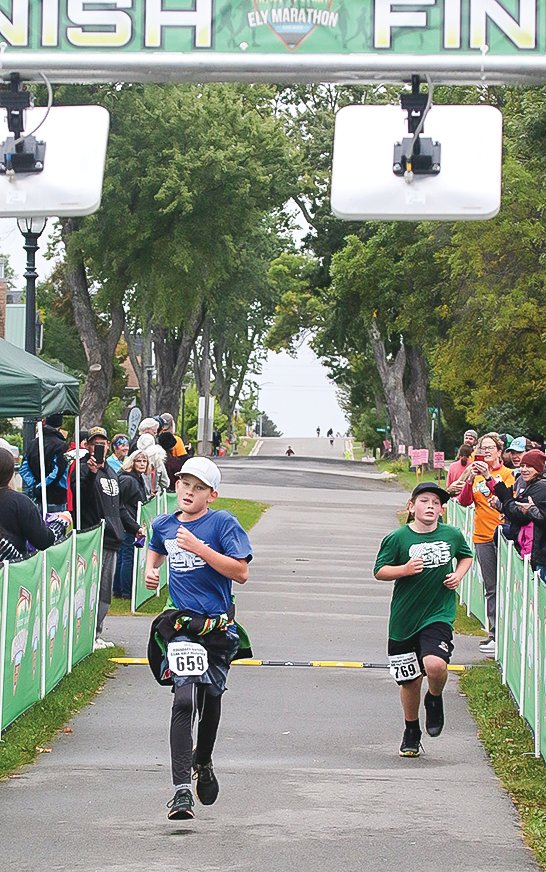 Ely sixth graders Henry Fetterer and Parker Niskala look strong heading into the finish of the half marathon at the 2:55 mark.
M. Helmberger
Previous Next
Posted Wednesday, September 28, 2022 8:02 pm

ELY- While turnout for the Ely Marathon and the Boundary Waters Bank Half Marathon was a bit lighter than normal, 548 runners plunked down the registration fees to compete in friendly weather conditions.
“We lucked out on the weather and we had some great fast times,” race organizer Wendy Lindsay said. “Everything went smoothly.”
But good running conditions didn’t keep the races from having a higher than usual attrition rate.
“We had fewer people who finished the race than we were planning, far less than who had registered,” Lindsay said. “So, it was a little tougher than what some folks thought it would be.”
A case in point was the fan-favorite individual portage canoe marathon, where three runners toting canoes started but only one finished.
The marathon had a new sponsor this year, Sherpa, a running app company. Founder Dane Rauschenberg, an extreme athlete noted for running 52 marathons in 52 weekends, was on hand for the event and ran the half marathon, finishing fifth.
In addition to the sponsors, the event is always supported by a large cadre of volunteers, and Lindsay was beyond pleased with this year’s crew.
“We had over 350 volunteers this year, which is incredible,” she said. “We need that many to make it happen safely.”
Marathon results
38-year-old Robert Henderson, of Minneapolis, won the marathon with a time of 2:57:06. Sam O’Donnell-Hoff of Duluth was close behind in second at 2:57:30, and Ely’s Hudson Kingston took third, clocking in at 3:00:13.
Sorcha Ashe of North Oaks scored a comfortable win on the women’s side with a time of 3:35.07. Tess Gessler of St. Paul finished just ahead of Ely’s Molly Gardner to take second at 3:45.35, with Gardner completing the course in 3:48:23.
Three Ely runners -- Sunshine Gardner, Nick Gardner, and Sean Ferrier – were the only ones to attempt the full marathon portage canoe race. Sunshine Gardner was the only one to hit each of the checkpoints in the allotted time and was the solo finisher with a winning time of 4:45:45.
The Ely Outfitting Company relay team of Charlie Cecil, Maddie Fahnline, Austin Konrath, Kristen Larsen, Elsa Soderstrom, and Eliza Vistica ran against the clock as the solo entry in the marathon relay team portage canoe event and completed the course in 5:07:31.
Half marathon results
The top spot in the Boundary Waters Bank half marathon was claimed by David Hyopponen, of Duluth, with a time of 1:16:43, which was a new race record. Placing second was Henri Carlson, of Cook, in 1:17:12, and third went to William Sackett, of Grand Rapids, in 1:24:40.
Lisa Smith, of Hibbing, was the first woman runner across the finish line with a time of 1:30:48. Runner-up Hanna Torvi, of Duluth, came in less than a minute behind at 1:31:34. Jackie Nelson of Mt. Iron wasn’t far back in third, clocking 1:32:23.
Three women and one man were signed up for the canoe portage half marathon, but only the women crossed the finish line. Dana Gilbertson, of Duluth, took top honors in 3:00.9, more than a half-hour ahead of the other two competitors. Runner-up Krisy Goetsch, of Merrill, Wis., crossed the line ahead of Claire Butchkoski by a mere four seconds, 4:38:27 to 4:38:31.
The team relay portage canoe half winner was Are We There Yet. Calvin Sinclair, Gus Sinclair, Jill Sinclair, Tom Sinclair, and Darrick Unger negotiated the course in 2:33:11. MortyHub DischFish, a three-person team comprised of Austin Fisher, Kendra Hubbell and Justin Mortenson, placed second in 2:45:36. Britta DeSutter, Jean Farmakes, Carin Skoog and Mya Snyder, running together as Paul Rudd OFC, took third with a time of 3:00:34.