REGIONAL— Congressman Rick Nolan was forced to play a bit of defense this past week, after he caught flak from many constituents for urging the new Trump administration to take a side in the … 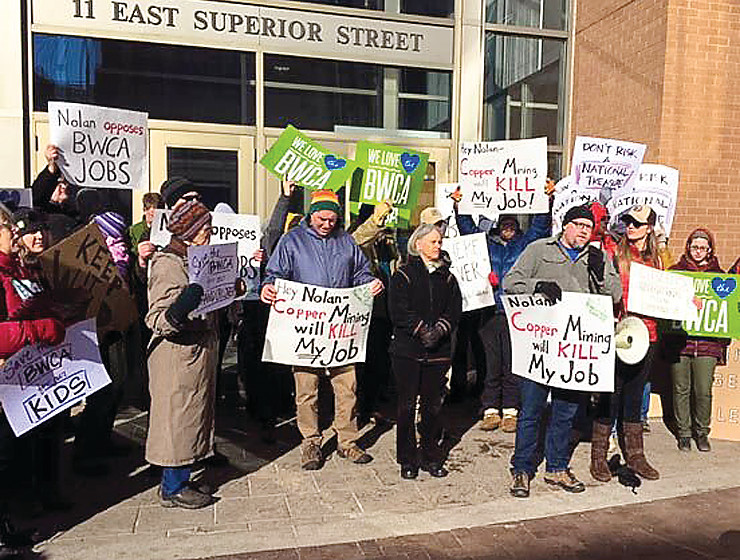 Protesters gathered outside Congressman Rick Nolan's office in Duluth yesterday to express their displeasure over his attempt to get the Trump administration to wade into a debate over copper-nickel mining in northeastern Minnesota.
Courtesy Campaign to Save the Boundary Waters
Posted Wednesday, February 8, 2017 5:23 pm

REGIONAL— Congressman Rick Nolan was forced to play a bit of defense this past week, after he caught flak from many constituents for urging the new Trump administration to take a side in the controversial debate over copper-nickel mining near Ely.

The issue has sharply divided Minnesotans, even in normally mining-friendly northeastern Minnesota, where concern has grown over the potential environmental effects of sulfide-based copper mining within the Boundary Waters watershed.

Those concerns prompted the U.S. Forest Service and the Bureau of Land Management to deny renewal of two longstanding mineral leases that Twin Metals, a venture owned by Chilean mining giant Antofagasta, had previously held near the Kawishiwi River, adjacent to the BWCAW.

Last month, the two federal agencies announced they would study a proposal for a 20-year withdrawal of 234,000-acres of federal land in the vicinity from the federal mining program.

Earlier this week, Nolan’s office announced he had sent a letter to the Undersecretary of Agriculture, which oversees the Forest Service, asking the new administration to overturn the planned scientific study of a possible withdrawal, potentially leaving the door open for copper-nickel mining on the edge of the BWCAW.

As news of his action spread, the phones started to ring at his offices, many from angry constituents who say they want a study of the effects of copper-nickel mining on the wilderness, and don’t want the Trump administration to overrule a proposal that polls show has broad support in Minnesota.

Such sentiments drew about 75 protestors, including many owners of outdoor recreation businesses in Ely and Duluth, to Nolan’s Duluth office this past Thursday, to make their displeasure known.

Nolan’s office indicated this week that phone calls from constituents have been running about fifty-fifty for and against his action, but the criticism was enough to prompt Nolan’s office to quickly issue a press statement, touting his dedication to the BWCA and his intention to protect it for future generations. “As an original cosponsor of the legislation that established the Boundary Waters Canoe Area (BWCA) as a wilderness area - which prohibits any commercial development, mining or otherwise, in the wilderness - I am forever committed to protecting the BWCA, the environmental review process and all the waters of Minnesota and the nation,” said Nolan in his statement.

Nolan said that any mining proposal would need to go through an environmental review process, but he said there’s no mining proposal in place to actually study. “The fact is, you can’t go through that process without a specific proposal,” he said.

Yet Nolan’s statement overlooks so-called programmatic environmental impact statements, which are done at the both the state and federal levels, on occasion, to provide broader guidance to policymakers as they consider proposals for major projects. Minnesota’s Generic Environmental Impact Statement on Timber Harvesting was one such example.

While the EIS on the proposed withdrawal is not a programmatic study, it is required under federal law any time an agency requests a withdrawal of land from the federal minerals program, as the Forest Service has done in this case. Federal agencies can request such withdrawals to protect vulnerable watersheds or unique or exceptional resources from potential mining operations, and the EIS will, in part, seek to determine if such threats justify the withdrawal. Supporters of the study argue that it provides an opportunity to examine the latest science and allow the public to weigh-in on the broader question of whether copper-nickel mining should be allowed— using any current technology— given the wilderness resource at risk should the technology fail. Such questions are typically beyond the scope of the environmental review process surrounding a mine proposal. Those analyses typically focus on the fine level details of a particular proposal, and potential mitigations, without providing opportunity to ask more fundamental questions, such as do the risks outweigh the potential benefits.

“Even the strongest advocates of resource extraction acknowledge that there are some places where sulfide-ore mining would be too harmful,” said Ely’s Becky Rom, who serves as national chair of the Save the Boundary Waters Campaign. “Denying Minnesotans and Americans the chance to weigh in, denying the importance of science-based decisions, is un-American,” added Rom.

Nolan has veered from many of his fellow DFLers over the issue of the Twin Metals proposal, which is strongly opposed by DFL Gov. Mark Dayton and former Vice President Walter Mondale. Nolan’s latest action drew fire from fellow U.S. House member Betty McCollum, of St. Paul, who called his letter to the Trump administration “an assault” on a national treasure.

Nolan, meanwhile, defended his environmental record. “I have consistently received high marks on scorecards from environmental groups – including 100 percent from the National Parks Conservation Association,” he said. “I’m proud of my work. We have the cleanest water in the state. We’re proud of it and we’re going to keep it that way.”