FIELD TWP- North Woods Grizzlies standout running back T.J. Chiabotti has been named one of the Elite Ten finalists for the Minnesota Football Coaches Association Mr. Football award, given to the … 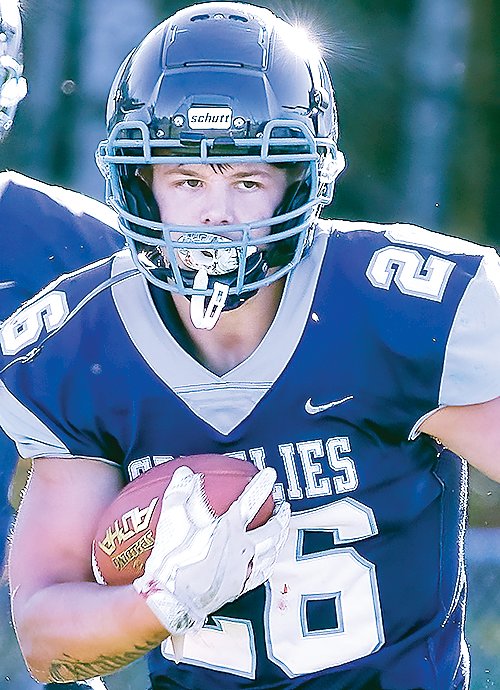 FIELD TWP- North Woods Grizzlies standout running back T.J. Chiabotti has been named one of the Elite Ten finalists for the Minnesota Football Coaches Association Mr. Football award, given to the state’s top football player as determined by a vote of MFCA members.
“It is much deserved and pretty special for T.J. with the body of work he’s put in over the course of his career,” said Grizzlies Head Coach Joel Anderson.
Chiabotti was the state’s 2021 regular season rushing leader for all classes, according to MN Football Hub. Chiabotti’s season total of 2,130 yards in nine games was second to Academy of Holy Angels running back Emmett Thompson, who played in 11 games, but Chiabotti had the state’s best per game average with 236.7 yards per contest. Chiabotti had four games in which he rushed for more than 300 yards, and his season total of 24 touchdowns tied for fourth best in the state. Chiabotti also became only the 19th player in Minnesota high school football history to eclipse the 5,000-yard career rushing mark.
“We’ve known T.J. was a special football player for a very long time,” Anderson said. “All the teams we’ve faced have known he’s special, too, and they’ve done everything in their power to stop him. Other coaches can see that his body of work is really exceptional.”
Anderson also noted that Chiabotti’s nomination reflects well on the Grizzlies’ teams past and present.
“I think T.J. would be the first to tell you that this nomination and recognition of him as an individual is all a result of the teams he’s played on, the line that blocked for him, the backs and ends that picked up defenders,” Anderson said. “He’d be the first to tell you he didn’t do it alone.”
Chiabotti is the nominee from the MFCA Northeast Sub-District and the only Class 1A finalist for the award. He’s likely a longshot for an award dominated by Class 5A and 6A players since its inception in 2004. Only two Class 3A players have been named Mr. Football, and the first of those, Nick Mertens of East Grand Forks in 2004, is the only awardee from north of the Twin Cities.
The other finalists include Jack Boyle, 5A Chaska, Connor Develice, 5A Andover, Eli Gillman, 3A Dassel-Cokato, Ryan Haley, 5A Mankato West, Lucas Heyer, 4A Hill-Murray, Kristen Hoskins, 5A Alexandria Area, Derrick Jameson Jr., 6A Maple Grove, Emmett Johnson, 4A Academy of Holy Angels, and Drew Kittelson, 2A Blooming Prairie. The list includes six running backs, two quarterbacks, one wide receiver and one offensive lineman. Six of the ten finalists, including Chiabotti, are noted as having played both offense and defense for their teams.
“I’m happy to see his name there with the people who are finalists for Mr. Football,” Anderson said. “I certainly think he deserves to be on that list. He would have been successful in whatever class he was playing in.”
The 2021 Mr. Football award will be presented at a banquet in Minneapolis on Dec. 5. The award is sponsored by MFCA and the Minnesota Vikings.