Where there are moose, there is usually plenty of distinctive signs

A moose hunt made a good excuse for a ski with a friend down a forest management road a few miles west of the house this past weekend. It was a hunt in the purest sense of the word, but not with a …

Where there are moose, there is usually plenty of distinctive signs 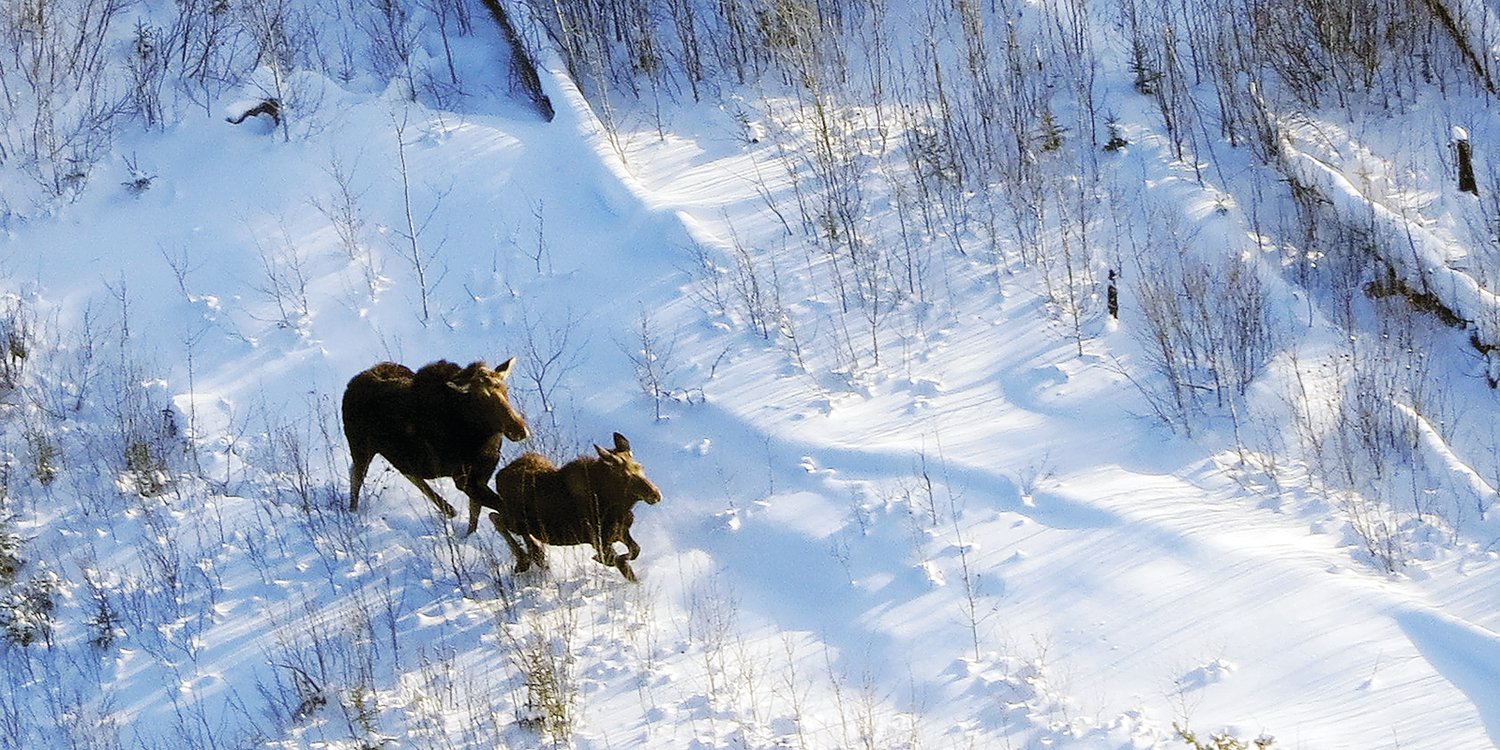 A moose cow and calf in the Pagami Creek burn.
M. Schrage 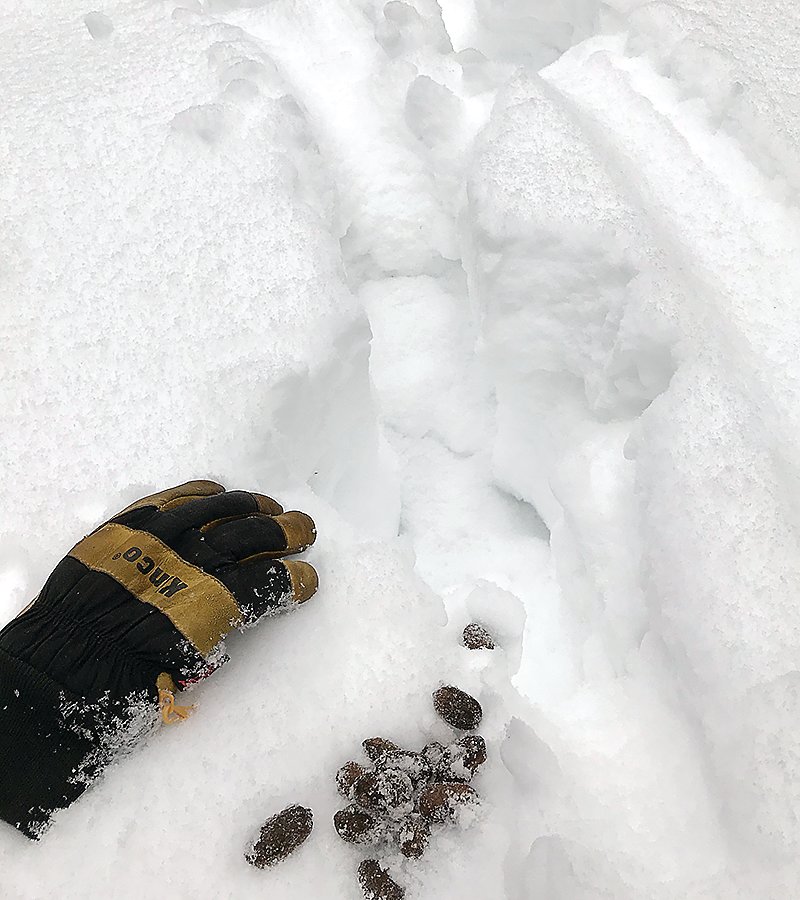 Moose tracks and droppings, with a glove for perspective.
M. Helmberger 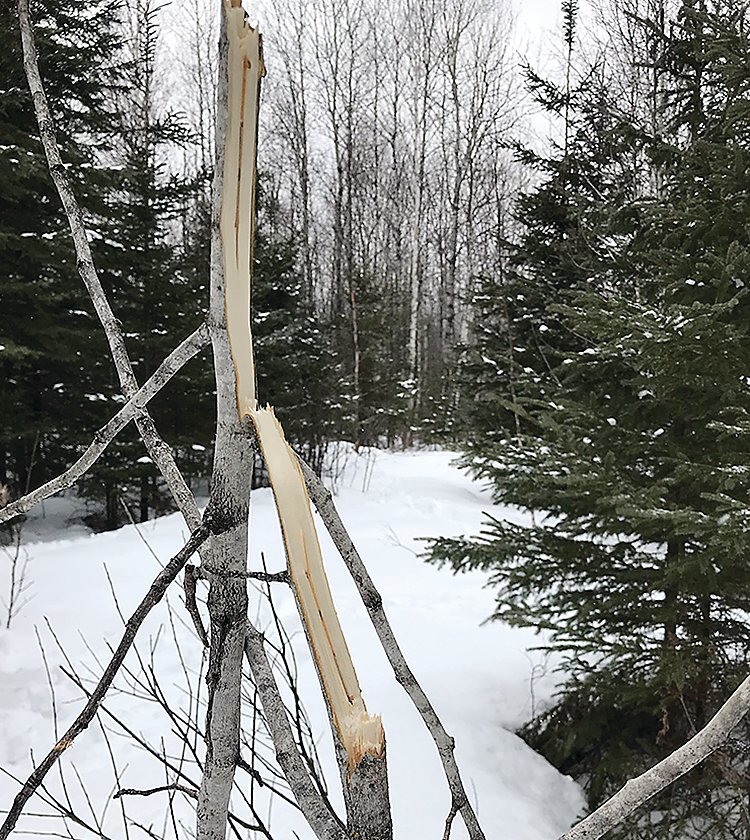 A moose hunt made a good excuse for a ski with a friend down a forest management road a few miles west of the house this past weekend. It was a hunt in the purest sense of the word, but not with a gun.
Instead, I wanted to check out an area where I had encountered plentiful moose sign last summer and fall. Given that moose have grown more scarce in the area in recent years, I make note when I do run into evidence of moose activity. I hadn’t been back there since the snow arrived in early November and the hard-crusted snow that we had last week made it a great time to get around in the woods.
The area we were exploring was a mix of habitats, some recent clearcuts, some younger and middle-aged woods as well. It was mostly aspen, along with some pockets of spruce and balsam fir which is where I had seen most of the moose sign last year.
It didn’t take long to discover that the moose were still in the vicinity. We first found an old set of tracks in the same area as last year. In deep snow, my first impression of moose tracks is that they look like human tracks, albeit from a very long-legged human. But after following a set of old tracks, we soon discovered more recent tracks and those eventually led to even more recent tracks, including some where the big split hooves of at least two and probably three different moose were visible.
Further down an ever-narrowing logging road, we found where the moose had been actively feeding within the last day or so. The evidence of moose browsing is always impressive. Shrubs and small trees up to a couple inches in diameter can be found just snapped off as the moose key in on the freshest and highest buds they can reach. The height at which moose can browse is also surprising. We were standing on nearly two feet of crusted snow, which gave me a reach of nearly ten feet off the ground, yet I could find branches browsed even above my reach. It’s clear that long legs, a relatively long neck and an extraordinarily long head, give the moose a reach that extends far beyond that of any other herbivore in North America. The moose in this case were browsing primarily on young aspen along with shrubs like willow and mountain maple, often and appropriately referred to as “moose maple” in our area.
Eventually, we started to find recent moose pellets, or droppings, which my friend, who is a relatively new resident, found impressively compact and efficient.
As we skied further, we soon found a recent moose bed in the snow, which was enormous by the scale of a typical deer bed. The both of us could have easily laid down in the giant impression in the snow with room to spare. Understanding the reach of a browsing moose and then seeing the size of their bed reminds you very quickly that these really are enormous animals. There are actually four subspecies of moose in North America and the subspecies found here in the North Country is known as the northwestern moose. It’s the subspecies that inhabits the western two-thirds of Canada and it’s the second largest of the subspecies found in North America, behind only the Alaskan moose. An Alaskan bull can weigh up to 1,300 pounds while a bull here in northern Minnesota can tip the scales at about 1,000 pounds. The two other subspecies are considerably smaller, with adult bulls weighing 600-800 pounds.
It’s interesting to note that the moose we tracked recently are considered outside Minnesota’s primary moose range, which has contracted to the east across the Arrowhead in recent years. Right now, the primary moose range, as determined by the DNR, starts just east of Tower, where deer densities begin to fall off. Outside the primary range, moose are typically found in more isolated pockets, like this group of animals I’ve been tracking. The good news is that the moose population has stabilized in northeastern Minnesota after about a decade of decline. I’d like to think that these animals are part of a tentative recovery in areas outside the primary range. Hopefully, that means that we’ll have moose to “hunt” around here for a long time to come.