VERMILION LAKE TWP— The Pike River dam is now slated for repairs that could help to maintain water levels on the Pike River Flowage, a normally 214-acre artificial lake located upstream of the … 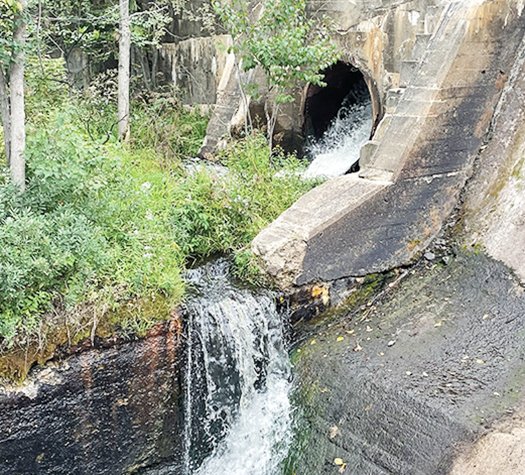 The Pike River Dam’s former penstock, which once held the dam’s turbine, continues to leak water, contributing to the drop of the water level in the Pike River Flowage. The penstock has leaked for years, but the ongoing drought has made the extra leakage a bigger problem than usual.
M. Helmberger
Posted Wednesday, October 27, 2021 4:29 pm

VERMILION LAKE TWP— The Pike River dam is now slated for repairs that could help to maintain water levels on the Pike River Flowage, a normally 214-acre artificial lake located upstream of the dam.
This summer’s intense drought had lowered water levels on the flowage dramatically, prompting complaints to the Department of Natural Resources, which now owns the dam and is responsible for maintenance. The city of Tower originally built the 110-year-old structure to generate electricity for the city, but the river’s flow proved unreliable and the dam was eventually abandoned by the city. The dam’s penstock, which once housed the dam’s power-generating turbine, which is located well below the lip of the dam, has continued to allow water from the flowage to drain, even during the worst of this summer’s drought.
Those complaints prompted Jason Boyle, the state’s dam safety engineer, to send a contract diver to the site to propose a solution. Boyle informed the Timberjay this week that the contractor has proposed installing a steel plate on the upstream side of the penstock to eliminate the outflow, a solution that, if implemented, would be “robust,” according to Boyle.
“We are in the process of hiring a contractor to stop the leaking penstock but we don’t have a contract yet,” said Boyle.
Water levels in the flowage have improved somewhat in recent weeks due to more seasonable rains in September and October, although they still remain well below normal levels. Loss of water behind the dam had noticeably shrunk the size of the flowage earlier this year, including leaving one entire bay virtually high and dry.