Rivers all but vanish as drought intensifies

REGIONAL— What happens when a river simply disappears? That’s the question after the latest water level report for the Vermilion River pegged the river’s flow at an astonishing 15 …

Rivers all but vanish as drought intensifies 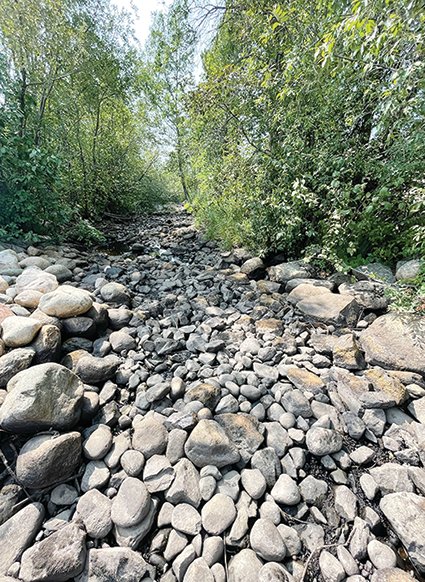 The rapids on the East Two River in Tower, just upstream of the city’s harbor. The river has effectively ceased to flow in recent days
Timberjay staff 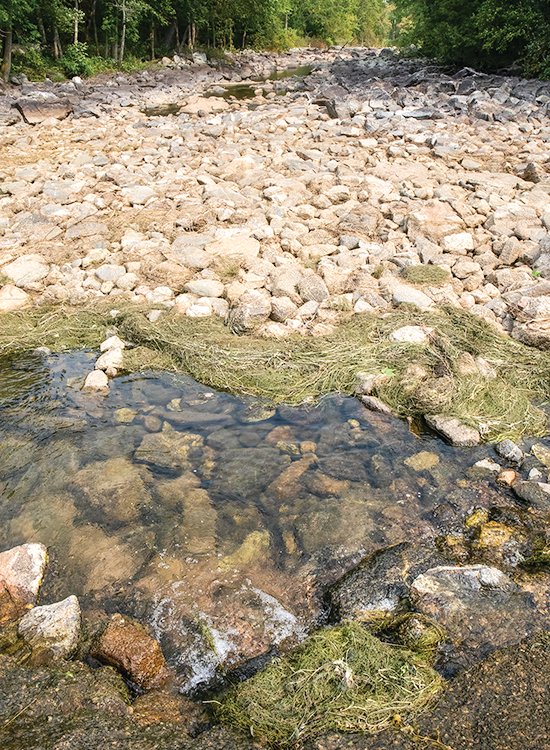 REGIONAL— What happens when a river simply disappears? That’s the question after the latest water level report for the Vermilion River pegged the river’s flow at an astonishing 15 cubic feet per second— a level not recorded in modern memory. It’s just one of a number of major rivers in the region now experiencing record low levels due to the intensifying drought.
The stream flow report is published weekly by the Department of Natural Resources and it shows virtually every major watershed in northern Minnesota in extremely low flow, but only the Roseau River in northwestern Minnesota is as far below its normal flows as the Vermilion. In a normal August, water would be flowing down the Vermilion River at a rate of 350 cubic feet per second, or cfs. It’s late summer and it’s a relatively low flow time of year even under normal conditions. As recently as last week, the Timberjay had reported that the Vermilion River had fallen to just 33 cfs as of the Aug. 9 stream flow report, or less than one-tenth its normal flow for this time of year. Yet, the Aug. 16 report issued by the DNR on Monday showed the river’s flow had fallen by more than half again since the week before, to a mere trickle of just 15 cfs.
It’s left the normally roaring Vermilion Falls, located just upstream from the river’s mouth at Crane Lake, reduced to a barely visible trickle through the rocks. In normal flows, it’s a roaring torrent, a deadly Class 6 rapids. Now, it’s just rocks that you could hop across in flip flops, while keeping your feet dry.
The river’s current condition is a reflection of Lake Vermilion, which provides the bulk of the river’s flow from its outlet at the Vermilion Dam. Yet, Lake Vermilion itself is so low, that there’s just a trickle coming over the lip of the dam.
It’s the same story further upstream. Tributaries that normally sustain Lake Vermilion during mid-to-late summer have dried up as well. The Pike River has all but disappeared as a source of inflow for the lake, and other, smaller streams, like the East Two River, which flows through Tower, have been reduced to dry riverbeds.
“It’s the lowest we’ve ever seen it,” said Gretchen Niemiste, who operates Aronson Boatworks on Lake Vermilion with her husband John.
The low water has prompted many lake residents to end their boating season early, said Niemiste, since many can no longer float their boats off their lifts. And driving on the sprawling lake is more dangerous than ever given the number of rocks now exposed, or nearly exposed, that normally don’t pose a danger to boaters.
“The number of props and lower units we’ve seen smashed this summer is alarming,” said Niemiste. To make matters worse, getting replacement parts is nearly impossible given the post-COVID shortages, which means many boats are out of commission for the season.
Even for experienced boaters, the current conditions pose a challenge. The Lake Vermilion mailboat, operated by Aronson Boatworks, has been forced to adjust drop-off locations for some of its mail customers because the boat can no longer safely reach customers’ docks.
“People really need to be careful,” said Niemiste.
Conditions were expected to worsen right through the week, with sunny skies, windy conditions, and high temperatures near 90 right through Thursday. The weekend does offer hope for some relief, with much cooler temperatures and varying chances of scattered showers or thunderstorms beginning Friday through Monday.