REGIONAL— Grouse hunters in northeastern Minnesota have reason for optimism heading into the fall, based on the results of this year’s spring drumming counts. While the annual grouse … 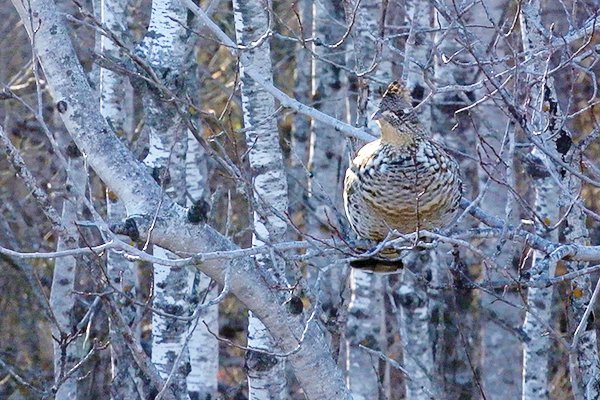 REGIONAL— Grouse hunters in northeastern Minnesota have reason for optimism heading into the fall, based on the results of this year’s spring drumming counts. While the annual grouse drumming survey found considerable variation around the state, this year’s average drum count of 1.7 birds per stop is somewhat above average. It was also considerably higher than the 1.2 drums per stop recorded in the northwest and the central hardwoods region. No routes were surveyed in southeastern Minnesota due to the COVID-19 pandemic.
While the spring drumming count is one indicator, a warm and dry start to the summer, as the region experienced this year, normally leads to strong ruffed grouse reproduction. Strong reproduction typically means hunters see more birds in the fall than they might otherwise anticipate given the spring drumming counts. Young birds often make up a considerable percentage of harvested birds each year.
Drumming is a low sound produced by males as they beat their wings rapidly and in increasing frequency to signal the location of their territory. Drumming displays also attract females that are ready to begin nesting. Ruffed grouse populations are surveyed by counting the number of male ruffed grouse heard drumming on established routes throughout the state’s forested regions.
Some consider the ruffed grouse the “king of game birds” because it’s so challenging to pursue, a thrill to witness on the wing and a delicious wild game entrée when served. These birds are native to Minnesota—the top ruffed grouse-producing state in the lower 48 states, with millions of acres of public land for hunters and their dogs to explore.
West Nile virus results
Test results from the second year of an ongoing study of the West Nile virus in ruffed grouse showed similar results to the previous year. Antibodies consistent with virus exposure were detected in 12.3 percent of the 317 samples submitted by hunters in 2019. This compares with a 12.5 percent antibody rate in the 273 samples submitted by hunters in 2018.
“West Nile virus exposure is lower in Minnesota than in other states where exposure has been studied, which may reflect the abundance and quality of grouse habitat in Minnesota,” said Charlotte Roy, grouse project leader with the Department of Natural Resources.
West Nile virus is carried by infected mosquitoes. Not all people or animals bitten by an infected mosquito will contract West Nile virus. There have been no documented cases of people contracting West Nile virus from consuming properly cooked meat.
West Nile virus has been present in Minnesota since the early 2000s, but interest in its effects on ruffed grouse increased following a study in Pennsylvania documenting relationships between habitat quality, populations and virus exposure. Some bird species recover quickly and become tolerant to the virus while others, such as blue jays and crows, suffer higher rates of mortality.
The Minnesota grouse hunting season opens on Saturday, Sept. 19.