MPCA: Trump proposal would punish those who invested in meeting the strict emissions standards

MPCA: Trump proposal would punish those who invested in meeting the strict emissions standards 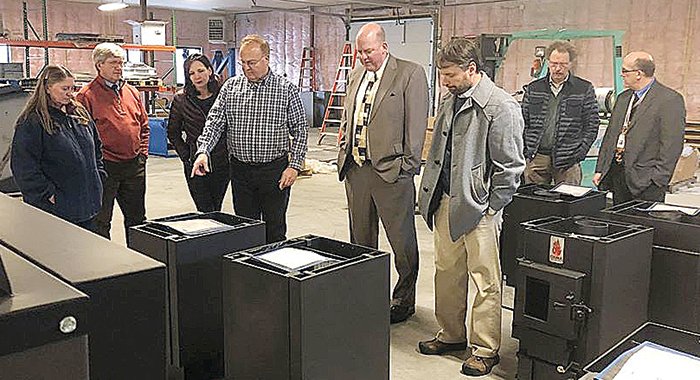 REGIONAL— The state of Minnesota has taken a strong stand against a proposal by the Trump administration to allow the continued sale of inefficient and polluting wood furnaces past a deadline that the Environmental Protection Agency had set nearly five years ago. And that’s good news for one local manufacturer of wood furnaces.
During a hearing last month on the proposal, Anne Jackson, an engineer with the state’s Pollution Control Agency, called the proposal by the federal Environmental Protection Agency “unconscionable” and urged agency officials to withdraw the idea.
In written testimony read into the record, Jackson noted that Minnesota has already incorporated the previously-approved federal emissions rules into state law and that the failure of the Trump EPA to enforce the rule, by allowing the continued sales of non-compliant furnaces past the May 15 deadline, threatens to create an enforcement headache for state officials.
At the same time, Jackson noted that the administration’s proposal would punish those manufacturers that made the investment to meet the strict new emissions standard, known as Step-2.
“Recognizing the value of providing efficient and clean-burning wood stoves, Minnesota manufacturers like Lamppa Manufacturing in Tower, Minnesota, have been making and selling Step 2-compliant stoves long before the May 2020 deadline,” Jackson stated.
“We’re opposed to the extension,” said Dale Horihan, plant manager for Lamppa Manufacturing, which remains the only wood furnace manufacturer in the country with a wood furnace that meets the new emissions standard. He notes that the EPA had established the new rules and announced the timeline in 2015, which should have given companies plenty of advanced notice. “A lot of this is coming from the big manufacturers with a lot of lobbying money,” said Horihan. “But the rules of the game were established, and now you’re trying to change the rules?”
Even if the EPA decides to offer the extension, Horihan is comfortable that Minnesota and nearly a dozen other states plan to enforce the new standards no matter what the EPA does. In all likelihood, Lamppa Manufacturing won’t be able to meet the demand for compliant wood-burning furnaces anyway, at least not without expanding their operation. The company has already nearly tripled its workforce since 2018.
In either case, the enforcement delay proposed by the Trump administration won’t last forever. Instead, it’s supposed to allow retailers additional time to sell wood-burning furnaces that don’t meet the new standard. Some have argued that the COVID-19 pandemic prevented them in some cases from selling older, non-compliant models ahead of the May deadline.
In Minnesota, however, Jackson said many retailers had donated their non-compliant inventory to a Stoves for Homes program in order to meet the deadline.
Minnesota wasn’t the only state expressing opposition to the administration’s proposed enforcement delay. Indeed, more than a dozen states urged the agency to withdraw the plan. The state of California’s Air Resources Board threatened legal action if the administration fails to enforce the new emissions standard. The new standard was designed to sharply limit particulate emissions from wood furnaces. In many parts of the country, wood-burning furnaces contribute the lion’s share of particulate pollution. “There is no good reason to provide additional time to sell noncompliant devices,” said MPCA’s Jackson, “especially in the face of fighting a deadly, respiratory virus pandemic.”
Lamppa company a beneficiary
The new emissions standard, which was developed and adopted under the Obama administration, proved to be a boon to Tower’s Lamppa Manufacturing, which remains the only manufacturer in the U.S. to meet the new standard. The company’s wood furnaces, which exceeded the strict new standard by 40 percent, remain among the cleanest-burning and most efficient wood furnaces being manufactured today anywhere in the world.
Lamppa Man-ufacturing underwent a significant expansion of its operations in 2019 in anticipation of increased sales of its Kuuma Vapor Fire 100 wood furnace. So far, sales have been brisk, says Horihan.
“We’re swamped, actually,” he said. “People normally don’t start ordering furnaces until July or August but we’ve sold a lot of them already this year. We’re probably out at least five to six weeks, which is where we usually are in October.”
At the same time, sales of the company’s famous sauna stoves are up sharply as well, according to Horihan.
And Lamppa Manufacturing is hoping to get a second wood furnace, the Vapor Fire 200, certified later this year. The company has been manufacturing that furnace for years, but couldn’t afford the cost of testing. With the new rules in place, Horihan said the 200 model could significantly expand the company’s market share, particularly since it’s smaller and somewhat less expensive than the Vapor Fire 100. Horihan said he had hoped to send the furnace in for testing in August, but the testing lab has been backlogged with wood furnaces that other companies are currently testing in hopes of meeting the new emissions standard.