The data on moose and fire

Here’s why quality habitat remains the key to moose recovery

According to the Department of Natural Resources, the increase in whitetail deer is the primary factor behind the decline of moose in northeastern Minnesota. Other researchers, like Dr. David Mech, …

The data on moose and fire

Here’s why quality habitat remains the key to moose recovery 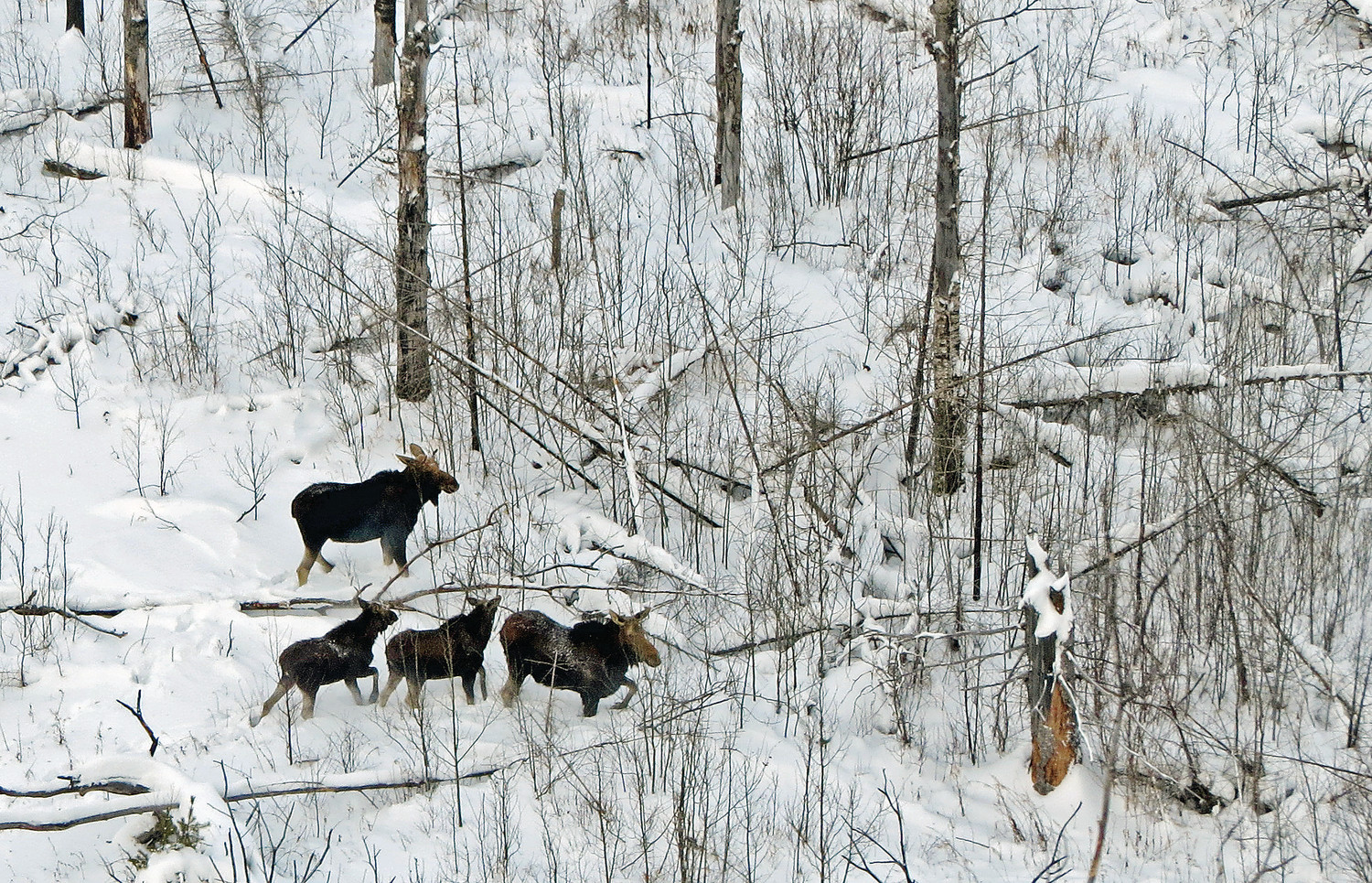 According to the Department of Natural Resources, the increase in whitetail deer is the primary factor behind the decline of moose in northeastern Minnesota. Other researchers, like Dr. David Mech, have suggested the connection between the moose population and wolf density is a critical factor as well.

It turns out, there’s a third factor that could be at least as important in determining whether the moose population is able to rebound in our region— and that’s habitat.

Data recently assembled by researchers show that where moose can find habitat they like, they’re thriving, even as their numbers remain relatively low elsewhere in the region. The key question is, what factors make habitat desirable for moose?

That’s a question that researchers, like Mike Schrage, have been studying for several years now. Schrage, a biologist with the Fond du Lac Reservation, has been plotting the locations of moose encountered each year during the DNR’s annual aerial survey. In particular, he’s looking at how moose utilize nine sample plots that the DNR flies over each year. The survey’s sample plots are otherwise selected at random each year, but researchers selected these nine to sample every year to see how moose reacted to the forest management changes experienced in those plots. Three of them include three large recent wildfires, the Pagami Creek, Cavity Lake, and Ham Lake fires, which burned close to 200,000 acres between them. Three other plots include recent large prescribed fires, including a large prescribed burn off the north and east side of Trout Lake, north of Lake Vermilion. The remaining three plots include areas where foresters and wildlife managers have worked to design timber management methods to benefit moose.

Schrage has recently assembled his findings, and the results are both eye-opening and encouraging.

Biologists have known for some time that moose like areas regenerating after fire, but Schrage’s data shows just how strong that affinity really is. “If you like moose, fire should be your friend,” said Schrage.

It turns out, moose stick to regenerating forest burns almost like Velcro. Outside of the burn perimeter, moose numbers dropped dramatically in many cases, even within the same test plot, while they were frequently abundant inside the fire’s old boundaries. The moose usually take a few years to start moving in, but once they come, they come in droves— and they don’t care whether it’s a wildfire or a prescribed burn. In fact, the highest moose numbers that researchers recorded this year were in the Trout Lake prescribed burn, where they estimated a total of 46 moose in the roughly 14 square-mile area of the sample plot. But it gets even better… the burn only encompasses about half of the land area in the sample plot, or maybe six square miles at the most— and every moose sighted was inside the burn perimeter. That’s the kind of moose density you rarely see anywhere.

And it’s not just a fluke. Schrage’s survey data found the exact same moose behavior in the other burn plots. Outside the burn perimeter, moose were scarce to non-existent. Inside, it’s wall-to-wall moose.

Schrage’s data also suggests that forest management that seeks to mimic some of the attributes of large disturbance, such as fire, can help moose as well, although the moose tended to be more scattered, without as clear a preference as they show for fire.

The reasons for this aren’t entirely clear, but there’s room for reasoned speculation. Fires undoubtedly clear the land of things like winter ticks, which can be a major burden for moose. Over time, tick numbers can build, but a good fire knocks them back, probably for years.

Fire also kills off land snails, which facilitate the transfer of parasitic brainworms from deer to moose. “It’s not a direct deer-to-moose disease transmission,” noted Schrage.

The land snail is what’s known as an intermediate host. The snails pick up the brainworms, most likely from deer scat, and then spread the disease to moose when they accidentally consume the snails while browsing vegetation. Each time a fire rolls through, it clears the landscape of the snails that make the spread of the deadly brainworm possible and it can take many years for the brainworm transmission to begin again.

Finally, fire tends to release a lot of nutrients into the soil, and that means regenerating growth is likely highly nutritious for moose, which improves their ability to fight off disease, or fend off predators like wolves. “We’re talking about an 800 to 1,000-pound animal that makes its living on leaves and twigs,” said Schrage. The quality of that forage makes a huge difference.

What this shows, more than anything, is that we very likely can rebuild our region’s moose herd, if we’re willing to adjust our forest management methods to create better habitat for moose. Keep in mind, we know that our current environment, even with wolves, deer, and warming winters, can still support high densities of moose. This survey data proves that. It’s just a matter of making the commitment to create the kind of habitat that moose need.

That means using prescribed fire where it’s possible, such as in the Boundary Waters and even in areas of public land outside the wilderness. It may mean going back to the use of fire to burn slashing after logging operations, as we used to do in the past. And it means planning timber harvests in such a way as to mimic this kind of large disturbance.

Biologists, like Schrage and Dr. John Pastor, at UMD, see the loss of this kind of habitat as a key factor, perhaps the major factor, behind the decline of moose in our region. “Wildlife species can withstand a lot of mortality if the habitat is good,” said Pastor during an interview with me late last year. “There’s too much 20-year old aspen on the landscape and that’s just poor habitat for most animals,” he added.

Schrage sees another bane to wildlife out there as well, the large number of acres planted to pine plantations. “That ain’t moose habitat,” quipped Schrage, who said how we regenerate our forests is as important as how we cut it. “I think we’re still paying the price for some of the decisions that were made on how to regenerate the forest in the past,” said Schrage.

Both Schrage and Pastor say they aren’t discounting the impact of other factors, like diseases and parasites carried by deer, but argue that quality habitat is bound to improve the health of the herd, and that’s the key to rebuilding the population. “We can’t just talk about wolves and deer,” said Schrage. “If we don’t provide good habitat for moose, nothing else is going to matter.”