ELY- The old saying goes, “You can tune a piano, but you can’t tuna fish.” Well, Mathias Rom made a trip to the end of the road earlier this month to do just that— tune a … 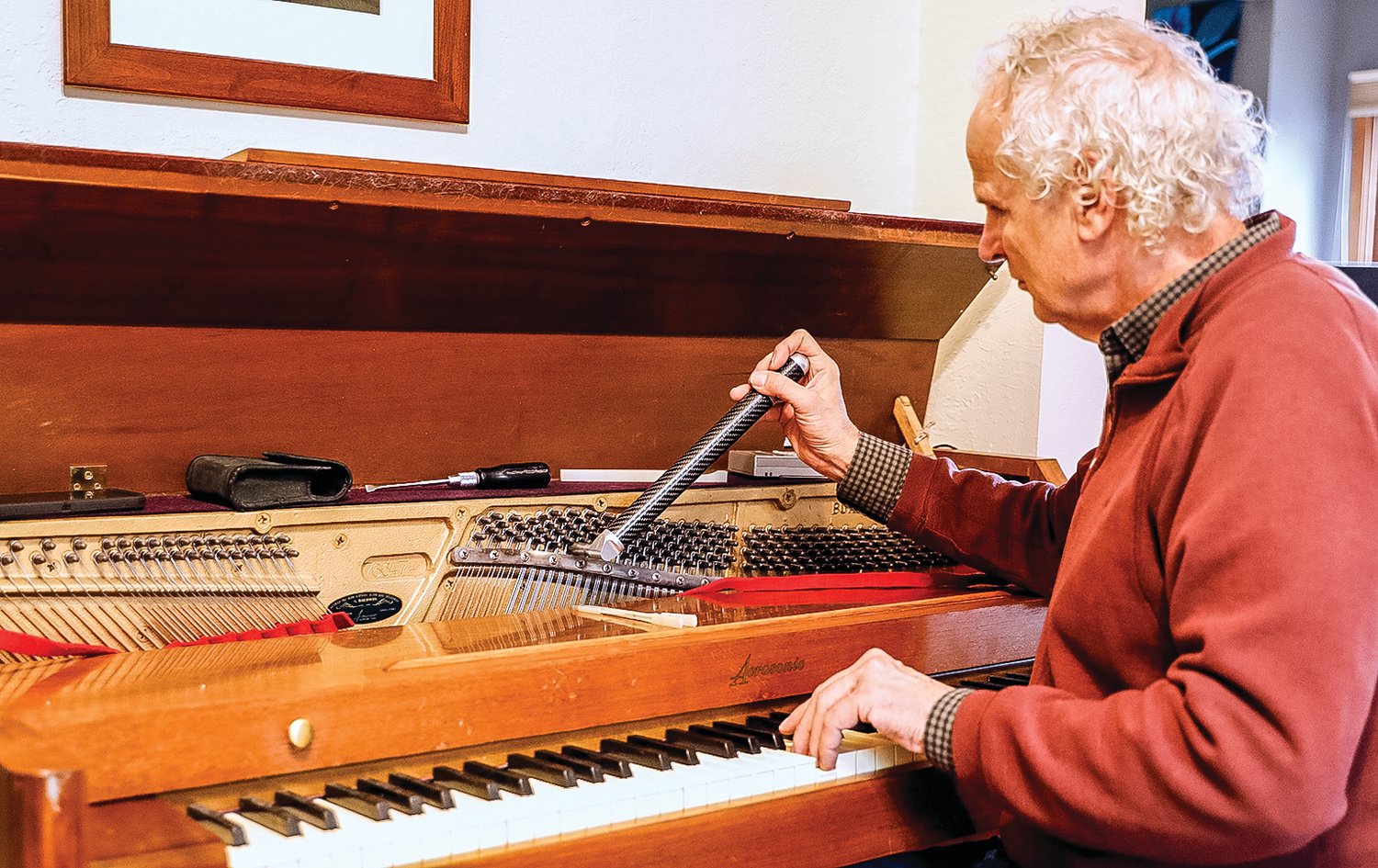 Mathias Rom has been tuning pianos for more than 40 years.
K. Vandervort 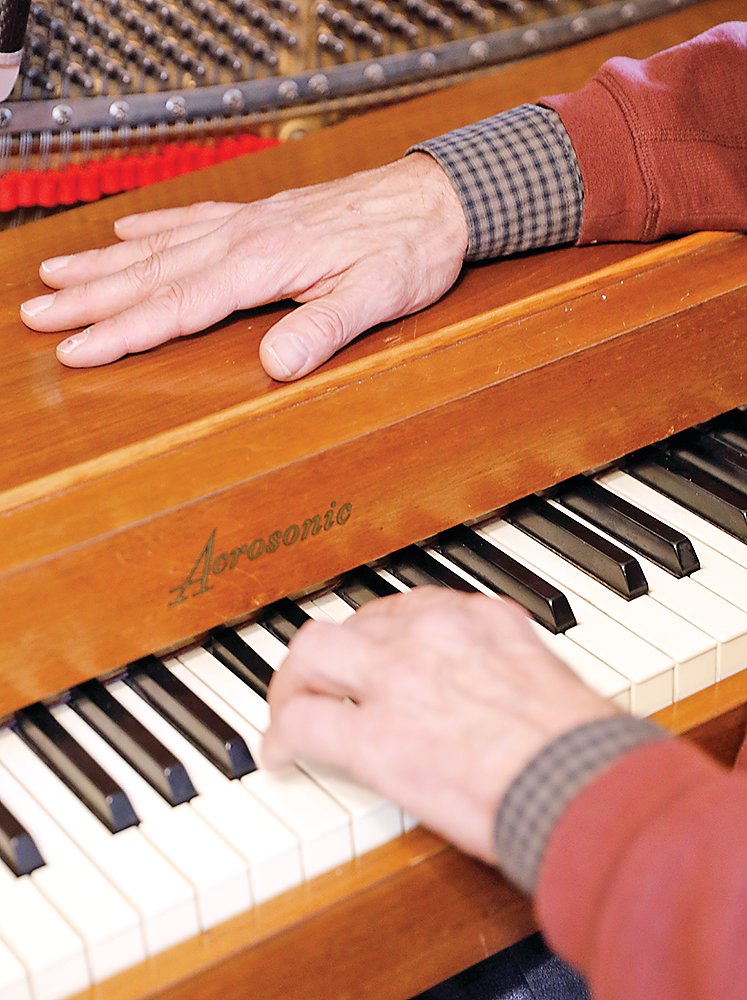 ELY- The old saying goes, “You can tune a piano, but you can’t tuna fish.” Well, Mathias Rom made a trip to the end of the road earlier this month to do just that— tune a piano, that is. In fact, he tuned several sets of ivories during his one-day stop-over. He didn’t go fishing.
Rom, who was born in Chicago and makes his home in Thunder Bay, Ontario, said he doubts he has any connection to the well-known Ely family with the same last name.
“When I’m here, I put my head down and tune pianos and haven’t looked for any family connections,” he said.
Rom visited the home of Greg and Heidi Mann on Central Avenue last Friday morning. He had appointments for four piano-tuning sessions that day before heading down to Duluth on his way to Chicago.
The self-taught tuner learned the craft through reading books.
“I finally started tuning a bit, and everyone was raving about how good I was. I didn’t believe them,” he said.
Not knowing how to become a professional piano tuner, Rom soon decided to get certified through the Piano Technician’s Guild.
“Their mission is to provide qualified technicians for the piano-owning community,” he said. He passed the “quite difficult” three-part certification examination in 1983 to be registered as a qualified piano technician.
“That satisfied me that I was on the right track.”
A mentor he met several years later told Rom, “Being registered meant I had the potential to become a piano tuner.”
Rom finally hit the mark. Across more than 42 years, he has tuned pianos for many well-known artists and entertainers including k. d. Lang, Victor Borge, Ricky Skaggs, Dolly Parton, Bob Hope, and “that guy who played the piano with his feet - Jerry Lee Lewis.”
The Manns have a Baldwin “spinet” or small upright piano.
“We bought the piano from Sally Koski when we were brand-new in Ely back in 2016,” Heidi Mann said. “Gabe (their son) had started taking lessons about two years prior, using a portable electric keyboard, and we wanted him to learn on a real piano. Sally and David had recently married, and they had three pianos between two houses, and had decided to sell this one. We took it as a good sign because it fit, practically to the inch, in the space where we have it in our house.”
Spinet pianos are the smallest upright pianos and require tuning more frequently than larger more stable console cabinets.
“Mathias has been tuning our piano from the beginning and I wouldn’t change for anybody else,” Mann said.
Without getting too technical, Rom explained that every piano has, on average, about 220 strings.
“Obviously, the objective is to get them all in a harmonious place where they all work together in all the possible combinations that happen in piano music,” he said. “The old-fashioned way is to create a temperament octave, somewhere around middle C, that represents the 12 notes of the musical scale. Then they are duplicated.”
Rom said most of his work is done by ear.
“Once I’m satisfied, I begin copying octave by octave,” he said.
The theory of tuning a piano pertains to every type of instrument, from the apartment-sized spinet to concert hall grand pianos.
“It takes practice, and not some special magical kind of ear,” he said. “The listening part is the easy part. The hard part is turning the tuning pins with a lever or hammer to get the correct sound.”
The “pressure” bars and “vee” bars work against each other, and the tuner’s challenge is to find the agreement between the two, he explained.
The need for Rom’s craft is slowly eroding.
“In 1905, as many as 90 percent of American homes had a piano,” he said. “I would say now that number is less than nine percent. There are so many reasons for that. Most people have jumped over to keyboards and digital pianos. In the 1980s, we hit a time when digital keyboards were big, but that didn’t really work. It is more of a machine. And they can play themselves. It gets very artificial and boring and the child never really learns what music is all about.”
The piano industry itself is partially responsible for the demise of the piano.
“Fighting consumerism is a big reason,” he said. “Even very well-to-do families don’t want to invest in a piano. Marketing and technology sucks money away from the family budget.”
Rom said that seasonal weather changes are the biggest culprit for a piano needing a tune up.
“The temperature in your house, and the humidity, changes mostly in the fall and spring, so if you can, get it done twice a year,” he said.
He mostly tunes pianos in private homes these days. Churches and schools still have some pianos, but not as many anymore.
While Rom has four decades of piano tuning, Rom said that in the last 20 years he has not had enough work, and now has a second job.
“My kids moved away and now my life is simpler. I’m content with my government pension and my other work. Piano tuning is like piano playing. You don’t really know what it is until you get to a high level, and you realize that the more you know the more you don’t know,” he said.