The connection between recreational deer feeding and moose decline is clear

We’ve reported frequently in recent years about the extensive research linking the decline in moose numbers in our region to the presence of whitetail deer in moose country. Whitetail deer are …

The connection between recreational deer feeding and moose decline is clear 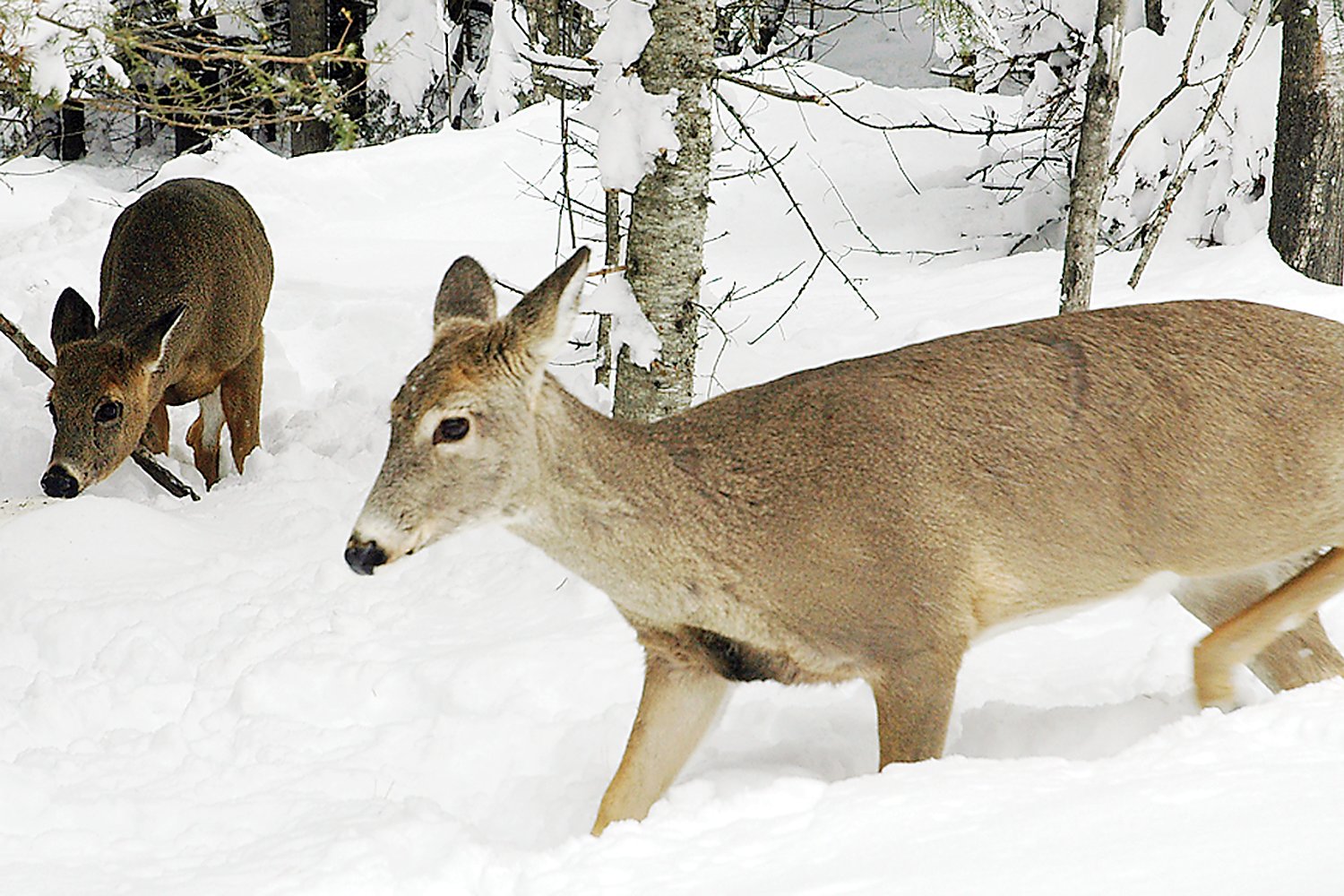 We’ve reported frequently in recent years about the extensive research linking the decline in moose numbers in our region to the presence of whitetail deer in moose country. Whitetail deer are deadly to moose, as they carry a number of parasites, including brainworm and liver flukes, that either kill or weaken moose to such a degree that they become vulnerable to predation.

Think of deer like a toxin. I know, most of us don’t see whitetails that way, but to a moose it’s not a bad analogy. The more of this toxin that is out there in the environment, the greater the chances are that a moose will eventually be exposed and suffer the effects. More whitetails on the landscape means more moose “toxin,” which increases the rate of moose mortality. Even a modest increase in the mortality rate of a species can make the difference between a stable or growing population and one that’s in decline.

We see fewer moose in our area because we’ve had higher deer densities in recent decades. Milder winters have contributed to that trend, but so has the huge increase in recreational deer feeding in our region. It’s just one more way that humans are stacking the deck against moose in the North Country.

I spoke the other day with DNR Tower area wildlife manager Tom Rusch, who regularly gets an “eye-in-the-sky” look at the area’s moose population as one of the state biologists who takes part in the annual aerial survey each January.

The good news is that moose are doing very well in those portions of our region where there is good habitat and where deer numbers are low. As I’ve written before, moose are doing exceptionally well in areas that have burned in recent years, such as the Pagami Creek area.

But, according to Rusch, a few things stand out, namely the absence of moose in places where they used to be found, particularly east of Ely along the Fernberg Road, the Eagles Nest area, and along the North Shore of Lake Superior. In those areas, it’s pretty clear what has been killing moose: people who feed deer recreationally.

There are plenty of reasons not to feed deer, including that the jury remains out as to whether it does more harm than good. Concentrating deer increases the risk of spreading disease, like chronic wasting disease, and increases the likelihood of car crashes. It also makes life easier for deer predators.

But the impact of the practice on moose is one more factor that folks should think about before they roll out the smorgasbord for their neighborhood whitetails.

Some folks have always fed deer, but it increased dramatically in popularity in the wake of the severe winters of the mid-1990s. One area feed dealer I spoke to last year told me that deer feed constituted an incidental part of his winter business 25 years ago, maybe three-to-five percent. Today, it’s 35 percent of his winter business and he has some customers who provide many tons of deer feed each season, drawing in dozens of deer.

Such activity may or may not help deer survive the winter here, but there’s no question it threatens the survival of any moose in the vicinity, and for two primary reasons.

First, the diseases that deer carry sicken and eventually kill adult moose. And the presence of larger numbers of whitetails invariably increases the density of the deer’s primary predator in the North Country, the gray wolf. As DNR research has shown, wolves are the primary cause of moose calf mortality in our region. Put more wolves on the landscape, which we do through recreational deer feeding, and fewer moose calves survive to adulthood. It’s basic cause and effect. Thirty years ago, a solid majority of the moose calves born in northeastern Minnesota regularly survived to adulthood and contributed to sustaining the population. Today, fewer than one-in-three moose calves is surviving and the higher density of wolves on the landscape is the primary reason. But don’t blame the wolves. They’re doing what they do for survival. It’s our decision to recreationally feed deer that is sustaining higher wolf numbers to the detriment of moose. As Pogo once said, we’ve met the enemy and he is us.

So what’s the answer? I don’t think a ban on deer feeding is in the cards, and I don’t like bans in any case, in part because they are difficult to enforce. But there’s justification for an educational campaign to warn the public about the negative consequences of deer feeding.

We spend millions educating the public about invasive species, and that’s an important issue because the survival of native aquatic species is at risk. But the survival of our native moose is also at risk.

Education can be incredibly effective, since most people want to do the right thing. Many folks who feed deer assume they are doing a good thing, and most greatly enjoy the chance to observe deer up close. But once you make the connection between deer feeding and the disappearance of moose, I suspect many will choose not to feed. If so, our moose will have a fighting chance.