Businesses cite proposed mine as grave threat to BWCAW

ELY— For over half a century, the Voyageur Outward Bound School has introduced thousands of people each year to the Boundary Waters while instilling greater confidence in their own potential and …

Businesses cite proposed mine as grave threat to BWCAW 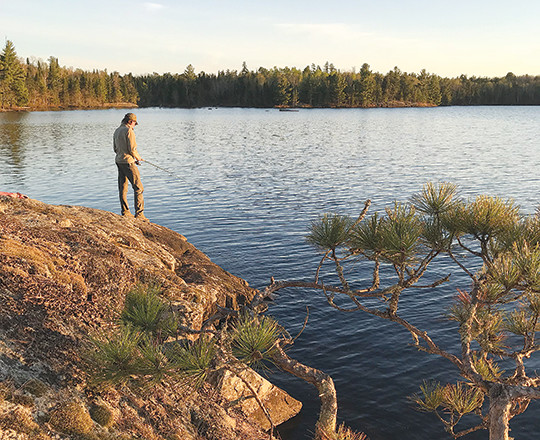 This actual image of an excerpt from the 1989 lease renewal indicates that INCO was provided preferential rights only. Such rights provide the leaseholder a preference over other parties for future renewal but they do not obligate the government to renew. This and similar documents are likely to pose a challenge to the Trump administration as it tries to defend the legality of its recent decision to reinstate mineral leases for Twin Metals.
Previous Next
Posted Thursday, June 21, 2018 9:00 am

ELY— For over half a century, the Voyageur Outward Bound School has introduced thousands of people each year to the Boundary Waters while instilling greater confidence in their own potential and abilities. It’s also provided a good job to hundreds of instructors, many of whom have made the Ely area their home.

On Thursday, the school, known by the acronym “VOBS” to its vast alumni, joined Northeastern Minnesotans for Wilderness and eight other Minnesota businesses that rely on the integrity of the Boundary Waters Canoe Area Wilderness in filing suit against the Trump Interior Department and Bureau of Land Management for restoring mineral leases for a proposed copper-nickel mine that they believe could devastate their school, located on the Kawishiwi River, south of Ely.

“Our interests as an organization are inextricably tied to the health and preservation of the Boundary Waters and maintaining its wilderness character,” said VOBS executive director Jack Lee. “The potential pollution and destruction to the Boundary Waters by adjacent mining operations present what we have concluded is a lethal and unacceptable risk to our business and mission of changing lives through challenge and discovery.”

Joining VOBS as co-plaintiffs are Piragis Northwoods Company, Ely Outfitting Company, Hungry Jack Outfitters, Sawbill Outfitters, River Point Resort and Outfitting Company, Northstar Canoe, Wenonah Canoe, and Women’s Wilderness Discovery. All of the plaintiffs contend that the proposed mine is a grave and direct threat to the BWCAW and their businesses, which depend on wilderness visitors. Those businesses, collectively, employ several hundred workers in Minnesota.

At issue is the May 2 decision by Interior Secretary Ryan Zinke to renew two federal mineral leases located along the South Kawishiwi River. Both the U.S. Forest Service and the Bureau of Land Management under President Obama had denied renewal of the leases in December 2016, a decision that had all but halted work on the Twin Metals mine proposal being advanced by Chilean mining giant Antofagasta.

But the Interior Department’s new legal counsel, Daniel Jorjani, a former counsel to the Charles Koch Foundation, issued an opinion late last year that argued that the Obama Interior Department had committed “legal error” in determining that the department had the authority to deny renewal of the leases. Jorjani argued that the federal government had no choice but to renew the claims given the language in the original leases, first issued to the International Nickel Company in 1966. Those leases allowed for three ten-year renewals, but add: “unless at the end of the primary term of this lease, the Lessee shall not have begun production.”

Because INCO never began production, legal counsel for both the Reagan and Obama administrations had determined that renewal was discretionary and those opinions, along with concerns about environmental impacts, formed the legal basis for the 2016 decision to deny a third renewal. Mine opponents say that denial is a final decision, and that the Interior Department has no authority to simply reinstate cancelled mineral leases nearly a year and a half later.

In a 37-page complaint that was scheduled to be filed Thursday in federal district court in Washington, D.C., the plaintiffs against the Trump administration call the Interior Department’s renewal decision “unlawful” and “arbitrary and capricious,” and ask the court to enjoin the Interior Department from taking further action that threatens the wilderness and the businesses that depend on it.

The legal arguments turn on the question of whether Franconia Minerals and Beaver Bay Inc., the parties seeking renewal of the leases in cooperation with Twin Metals, had an absolute right or merely a preferential right to renewal. While the 1966 lease granted INCO and its successors a right to an initial 20-year term and three subsequent ten-year renewals, previous Interior Department lawyers concluded that such a right was contingent on the start of production during the initial period or during an initial time extension. The BLM and the U.S. Forest Service granted lease renewals in 1989 and 2004, but those leases specifically indicate they provide preferential rights only. Such rights mean that the applicant has the right to be preferred over other applicants, but they don’t require federal government renewal.

Jorjani argued that the production requirement in the 1966 lease only affected the federal government’s right to adjust the terms and conditions of royalties and other payments to the government, but left the overall renewal terms intact. But Jorjani’s claim is tenuous, considering the language in the original 1966 lease, which stated: “the Lessee shall be entitled to renewal as herein provided without readjustment except of royalties payable hereunder if at the end of the primary or renewal period such an extension shall be in effect, (but the Lessee shall not be entitled to subsequent such renewals unless it shall have begun production within the extended time.”)

The NMW lawsuit notes that more than 52 years after the first lease was approved, no company has undertaken mineral production on the lands included in the leases.

While courts are normally restricted to consider only the terms of such a contract, when a contract is deemed ambiguous, the court can consider other information to help it determine the intent of the parties. Jorjani, in his opinion, declares the lease agreement “ambiguous,” and points to the brief 1989 transmittal letter from the BLM to INCO, indicating that the lease was being renewed “under the existing terms and conditions of the original lease.”

The NMW lawsuit, however, argues that the terms referenced in the transmittal letter refer specifically to the terms and conditions of royalties and production requirements, which had been the subject of intense negotiation between the federal government and INCO as part of the drafting of the original lease. In fact, both the 1989 and 2004 lease renewals include two “Special Stipulations” citing the exact provisions in the original lease that were to continue in effect, and both pertain solely to royalty amounts and production requirements. The lawsuit notes that neither of the lease renewals contained any language that appeared to nullify or reverse the preferential rights clearly indicated in the documents.

While Twin Metals’ legal counsel have argued in court and to the government that they have an absolute right to one more lease renewal, the company has portrayed its two federal leases as “preferential” in its own securities filings, including in its 43-101 pre-feasibility report, released in 2014. That document goes on to state: “Subject to applicable laws and regulations, BLM has discretion as to whether to issue or renew any prospecting permit and any preference right lease, as well as discretion with respect to the terms and conditions to be included in any such prospecting permits and preference right leases. Issuance and renewal of prospecting permits and preference right leases also are subject to review by the United Sates Forest Service (USFS) under applicable federal law.”

Federal law does, in fact, provide the Forest Service with the right to deny a mineral lease application on the Superior National Forest when the agency holds the affected surface rights, but the Trump Interior Department got around that law by reinstating the 1966 lease terms, rather than renewing the 2004 leases, and concluding that the renewal was mandatory. That allowed the BLM to reinstate the mineral leases over the objections of the Forest Service

If successful, the NMW lawsuit could be a major blow to Twin Metals’ mine proposal, but it would not necessarily be a final one. The company would have the opportunity to apply for new mineral leases, but that process would now require an environmental review and public comment, as well as approval from the U.S. Forest Service, which would be in doubt.

Former Forest Service Chief Tom Tidwell, in December 2016, issued detailed findings of fact concluding it was likely that acid mine drainage from the Twin Metals mine would contaminate the BWCAW and cause adverse effects on the water quality, fish populations, aquatic ecosystems, and animal species. Tidwell further considered the possibility of containment, mitigation and remediation efforts and found that very few would be compatible with maintaining the BWCAW’s wilderness character.

NMW and its co-plaintiffs have reached similar conclusions. “My business and my quality of life depend on the protection of the water, the fish and wildlife, healthy forests, clean air, dark night skies and the natural soundtrack of the BWCAW and of the areas people travel on the Superior National Forest to get into and out of the BWCAW,” said Peta Barrett, owner of Women’s Wilderness Discovery.

The Forest Service is currently studying the impact of a proposed 20-year mineral withdrawal affecting 234,000 acres, including the lands that Twin Metals hopes to mine. If Twin Metals’ mineral leases are eventually upheld by the courts, those lands would presumably be exempt from a withdrawal.

Twin Metals officials argue that the company has spent as much as $400 million to advance its project and that it should be allowed to begin environmental review of an actual mine plan before any steps are taken to halt the project. The company recently announced that it expects to have a detailed mine plan available for review within about 18 months.