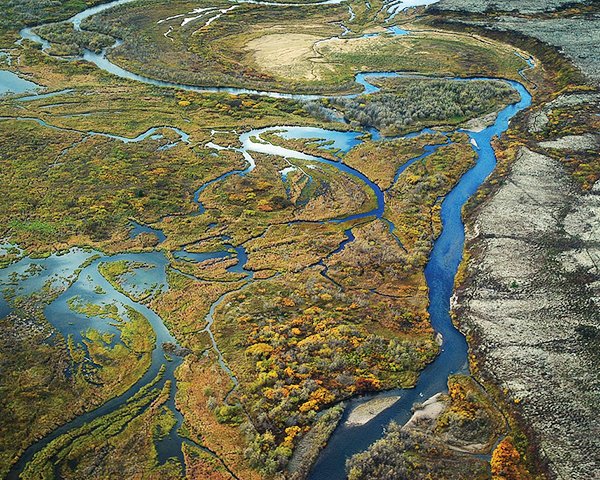 An aerial view of a portion of the proposed Pebble Mine site. The Trump administration recently reversed course on the project.
EPA photo
Posted Wednesday, August 26, 2020 4:30 pm

ELY— Local business owners and wilderness advocates are calling on the Trump administration to take a skeptical look at the proposed Twin Metals copper-nickel mine just upstream of the Boundary Waters, and they’re citing the administration’s recent about-face on an equally controversial copper mine in southwest Alaska as justification.
Just last month, the administration had cleared the way for development of a massive copper operation, known as the Pebble Mine, in the headwaters of Bristol Bay, one of the world’s top salmon fisheries.
Yet, on Monday, the administration, reversed itself when the Army Corps denied a key wetlands permit to the Canadian mining company behind the project. Just a month ago, the Army Corps had concluded the mine would have little impact on salmon numbers in Bristol Bay and had signaled it planned to move forward with permitting the project.
The turnabout appears to have been engineered by Donald Trump Jr., who has fished for salmon in Bristol Bay on multiple occasions. The younger Trump was joined by Fox News celebrity host Tucker Carlson and others with influence over the president who argued that the environmental impacts and economic risks to the fishing industry outweighed the project’s potential benefits.
“They were right,” said Becky Rom, of the Campaign to Save the Boundary Waters, during a press conference on Monday, drawing attention to the administration’s decision. “The headwaters of Bristol Bay is no place for a sulfide-based copper mine,” she said, before adding that the 1.1 million-acre Boundary Waters Canoe Area Wilderness deserves the same consideration.
Unlike the Pebble Mine, which was slated to be built more than 100 miles from Bristol Bay, the proposed Twin Metals mine would be located less than ten miles upstream from the BWCAW, along one of the wilderness area’s primary watersheds.
The U.S. Forest Service rejected the mine plan back in 2016, citing the high probability that acid drainage from the mine or its tailings would contaminate some of the most pristine waters in the lower 48 states, located just downstream.
“The water is so clean that you can dip your cup in the lake and drink,” said Rom.
Echoing Fox News’ Carlson, Rom said the future of the Twin Metals project should not be a partisan issue, noting that recent polls have shown strong bipartisan support for protecting the BWCAW from mining pollution.
Local business owners joined Rom in making the case, noting that a thriving industry has grown up to outfit and guide visitors to the wilderness. That’s been particularly true this year, as Ely outfitters Steve Piragis and Jason Zabokrtsky stated in their own comments on Monday. Both Piragis and Zabokrtsky, reflecting the experience of many other outfitters in the region, said that their summer business has been off the charts this year, as vacationers, mostly from the Midwest, have sought time in the wilderness in record numbers.
“Ely seems to be basically recession-proof,” said Piragis, who operates Piragis Northwoods Company with his wife Nancy. “People love this wilderness. This year, especially, it’s a place where many people are seeking solace and safety.”
Rom stated her belief that an economy based on outdoor recreation was a more stable and sustainable model of development than a copper-nickel mine, a view that was supported by a study produced by two Harvard economists back in 2018. That study examined 72 separate scenarios, and concluded that in all but three scenarios, the Ely area’s economy would be better off without the mine within just ten years.
Zabokrtsky said it’s clear that the Boundary Waters, and the amenities found throughout the Superior National Forest, continue to “drive the local economy.”
While pleased with the decision on the Pebble Mine, Rom said a tiny handful of influential individuals should not be able to determine the future of public lands owned by everyone.
“Protection of these areas should not be dependent on the views of a Trump family member, or a friend. Or the landlord of a Trump family member,” Rom added, referencing Andronico Luksic, the primary owner of Twin Metals’ parent company Antofagasta. Luksic purchased a Washington, D.C. mansion shortly after the 2016 election, which he has rented ever since to Ivanka Trump and her husband Jared Kushner.
“The Boundary Waters is at risk of being sacrificed for the benefit of a billionaire family tied to a Trump family member,” said Rom.
Rom acknowledged that the campaign has considered reaching out to Carlson or Donald Trump Jr. to arrange a possible visit to the Boundary Waters. “But it is our initial view that we would be playing the same ‘insider’ game,” she said.