REGIONAL— Tribal officials and environmentalists are reacting with alarm over a proposal to remove some water quality standards affecting a portion of the Dark River, located northwest of Virginia. … 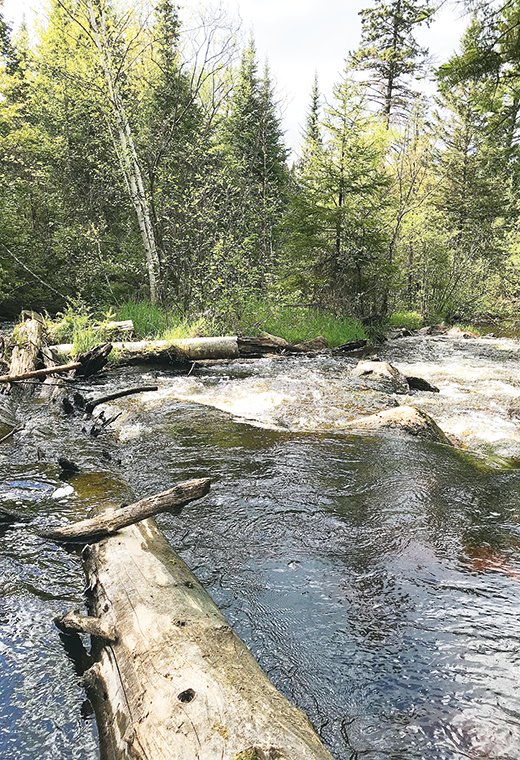 REGIONAL— Tribal officials and environmentalists are reacting with alarm over a proposal to remove some water quality standards affecting a portion of the Dark River, located northwest of Virginia.

The proposal is part of a petition submitted last Aug. 31 by U.S. Steel, which has, for decades, sought to fend off efforts by state and federal regulators to force the company to clean up pollution discharges from its 8,000-acre Minntac tailings basin.

The discharges, which enter both the Dark River and the Sandy River, regularly exceed what limited water quality standards are currently imposed on the company, including for sulfates, specific conductance, and total dissolved solids.

U.S. Steel’s petition is highly technical in nature and seeks to change the official classification of a portion of the Dark River that supports wild and stocked trout. Public waters in Minnesota are regulated based on their classifications, which reflect potential uses of those waters, such as drinking water, recreation, industrial or agricultural irrigation. Those classes include: Class 1 (drinking water), Class 2 (aquatic life, recreation, and wildlife) Class 3 (industrial), Class 4 (agricultural), and Class 5 (aesthetic enjoyment).

Many public waters have multiple designated uses and, when taken together, those designations can impact the water quality standards that the MPCA is required to enforce for those lakes or streams.

U.S. Steel is seeking to drop three designated uses, including drinking water, industrial, and agricultural, for the trout stream portion of the Dark River, which begins about a mile and a half downstream from Dark Lake. According to the company, the change makes sense, since the stretch of river is unlikely to be used for industrial or agriculture and it is not currently used in any significant means for drinking water. The trout stream segment of the Dark River extends eight miles and is located within the Superior National Forest, about 16 miles northeast of Chisholm.

Yet MPCA officials say they’ve reviewed U.S. Steel’s petition and agree that the information submitted supports the requested review of the designated uses. The MPCA tentatively plans to develop a “use and value demonstration” to remove the uses as U.S. Steel is seeking, “based on the determination that the specific beneficial uses of drinking water, industrial consumption and agricultural irrigation do not currently exist for the trout reach portion of the Dark River, and are reasonably unlikely to occur in the future.”

In many cases, the designated uses are applied to waterways based on little actual analysis or review, but a use and value determination is one way to more thoroughly assess the appropriateness of a use designation.

According to MPCA officials, “all other use classes, and the standards that protect those uses, including the protection of aquatic life and the identification of this water as a trout water, will not be affected by the use classification changes being considered.”

“It looks so reasonable on its surface,” said Nancy Schuldt, water protection coordinator for the Fond du Lac Band, which strongly opposes the change. “You have to really understand the Clean Water Act and the underlying motivation of industry to recognize that this really is appalling.”

At issue, according to critics, is that the three designated uses for the river that U.S. Steel wants to eliminate are the only uses in state rules that come with the strictest numeric standards for some of the very pollutants that U.S. Steel is discharging into area waterways, like the Dark River.

U.S. Steel doesn’t deny its motivation. In fact, the company is not requesting removing other designated uses, such as livestock watering, because the company isn’t currently violating those standards. “Available data show that these classes’ numeric and narrative standards are met in the Dark River designated trout stream,” states U.S. Steel in its petition filing with the MPCA.

By contrast, U.S. Steel’s discharges into the Dark River have regularly exceeded the water quality standards established for the types of uses that U.S. Steel wants to eliminate. The most significant is the company’s ongoing violation of the drinking water standard for sulfate, of 250 mg/l.

The Dark River would still be designated as Class 2, for aquatic life, recreation, and wildlife, but those public waters are not protected by any numeric water quality standard. Instead, they are covered by what’s known as a narrative standard, which ostensibly requires protection of the environment. Yet those standards, because they are not clearly spelled out, have proven difficult to effectively enforce in the past, note environmental advocates. As a trout stream, the eight-mile stretch of the Dark River in question, is subject to other requirements to maintain cold temperatures and sufficient dissolved oxygen to support trout, but those standards don’t appear to be threatened by Minntac’s discharges.

“It’s pretty clear they’re trying to gut all the surface water quality standards to which they might have to comply,” said Paula Maccabee, legal counsel for Water Legacy. “They’re trying to roll back a half century of environmental laws.”

MPCA spokesperson Darin Broton doesn’t see it that way. “The MPCA is not considering weakening any protections to trout streams, including the Dark River,” he said in response to questions from the Timberjay. “U.S. Steel has requested a change in the designation, which is permitted under Minnesota rules.

The MPCA has taken public comments on this proposed change and is still reviewing them. Any petitioner would not only need to prove the trout stream is not harmed, but also ensure downstream standards are also met - an extremely high bar for any petitioner.”

Tribal officials acknowledge that the change likely wouldn’t make much difference to the Dark River’s trout population, which has managed to persist despite the fact that Minntac has been discharging pollutants into the river for decades.

“The fact that trout might be hanging on isn’t really the issue,” said Schuldt, who notes that other types of aquatic life are more sensitive to some of the pollutants that Minntac is discharging than are trout.

That’s not really the issue, anyway, insists Schuldt. “They’re [U.S. Steel] trying to game the system. The only place they want a change in use classification is where there is any link to a numeric standard that they have to meet.”

While MPCA officials claim that the change won’t impact water quality in the trout portion of the Dark River, that assumes that U.S. Steel won’t use the change in classification as justification for changes in its newly-issued permit. Minntac’s new permit requires the company to eventually install a seepage collection and return system at the outlet to the Dark River in order to reduce its pollution outflow into the Dark River. The MPCA required the company to install a similar system at the outflow of the Sandy River several years ago and officials believe that’s reduced pollution discharges into that river by about 40 percent. The Sandy River is a tributary to the Pike River, which discharges into Lake Vermilion.

According to Broton, the MPCA expects a seepage capture and return system at the Dark River outflow will capture all of the surface discharge, although subsurface seepage would likely continue as is the case for the Sandy River. But that’s based on the projections of engineers in a hydrogeological system that Broton acknowledges is “very complex and variable” in different parts of the basin. “Because of this uncertainty, it is difficult to estimate the projected overall capture efficiency (of total seepage) of the Dark River system,” he stated.

If the MPCA were to change the use classification on the Dark River, as U.S. Steel proposes, it could bolster a subsequent argument by the company that seepage collection isn’t necessary.

The company has aggressively resisted the MPCA’s authority for years, deploying a wide range of strategies to hold off regulators. When that’s failed, they’ve tapped the political clout of Iron Range legislators to get their way in St. Paul.

The MPCA and the state of Minnesota had come under increasing pressure from the federal Environmental Protection Agency in the later years of the Obama administration for the state agency’s longstanding failure to clamp down on pollution discharges from Minntac and other taconite mines on the Iron Range.

Environmental advocates now worry that the lax enforcement of the Trump EPA is being seen by industry as an opportunity to weaken regulations across the board, in a way that EPA officials under prior administrations would have never allowed.

“I think that’s exactly what’s happening,” said Maccabee. “Under Trump, there’s a license to do all this stuff. We’re in a period of disregard for the environment and general lawlessness— and it’s terrifying to me.”

In the case of Minntac, Schuldt said the company’s ongoing strategy to undermine water quality enforcement predates the Trump administration. “It is just a bonus for them to have an EPA that’s so lax its oversight capacity. That makes it easier for them to do these things. I’d like to think that the MPCA could not get away with it otherwise.”