ORR- To get ready for the busy summer tourist season, there’s a lot of work that has to take place at the Vince Shute Wildlife Sanctuary near Orr to accommodate all of the staff, thousands of … 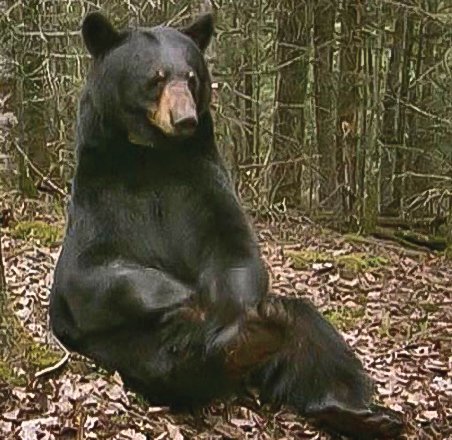 A large bear at the Vince Shute sanctuary has a good scratch after his meal.
file photo
Posted Thursday, January 13, 2022 2:30 pm

ORR- To get ready for the busy summer tourist season, there’s a lot of work that has to take place at the Vince Shute Wildlife Sanctuary near Orr to accommodate all of the staff, thousands of visitors, and most importantly the voracious hunger of the star attractions, the wild black bears.
But the American Bear Association board of directors is facing a potential bottleneck: with preparations needing to kick into high gear by March, they’re without a director.
New opportunities await outgoing director Steph Horner, and while board Vice-President Karen Hauserman understands change happens, she’s sorry to see Horner go.
“When Steph started out, I’m sure at the time she had nothing like what she’s been doing in mind,” Hauserman said. “She went up as an intern and she was great, she loved it. She grew into the job, and then she grew that job. She had passion, and she had work ethics that are beyond reproach. She’s a very special person, and I just hate to see her go. I told her I wouldn’t keep trying to talk her into staying, but I find it almost impossible not to do.”
But Hauserman and the other board members are realists, and with Horner’s departure confirmed, they started advertising the position in December, posting it on general job sites like Indeed.com and more specialized sites for ecological and wildlife positions.
Applications have been trickling in, Hauserman said, but they’re hoping to get more. As is often the case, the ones they’ve received so far are a real mixed bag.
“We’ve gotten a lot of applications and a lot of them are so way overqualified,” Hauserman said. “Like PhDs working on theories about alcohol and drug abuse, and they’ve written books on it.”
What the board has found lacking in most applications is a focus on how applicants see themselves fitting in to the work at Vince Shute and life in the North Country.
“It makes me think, ‘Is this person going to be happy living up north or are we going to be in the same situation next year and the year after. It takes a very special person. Some people would love living here and some people have a hard time even visiting. The area is unique, the job is unique, the person has to be unique.”
Few would know better than Hauserman. While she lives in New Jersey these days, she is one of the three original founders of the sanctuary, and reminisces fondly about its namesake, Vince Shute.
“I think the driving force in the (director) and their passion actually comes once they’re there. It grows. I know it certainly did for me. When I found Vince I thought I had found Heaven or something,” she said. “What was going on up there I just couldn’t believe. What he was doing was what I could imagine could be done with bears. He was coexisting way before it was even a word.”
Passion is the key ingredient Hauserman is hoping to find in a director candidate, passion for bears and also educating the public about them. Along with an inclination toward a rustic lifestyle in the north woods, they hope that a new director will also come equipped with basic management skills necessary to perform the multi-faceted job successfully. Staffing, facilities maintenance, food procurement, scheduling, following a budget, promoting the sanctuary, and more are all part of the job, but much of it, including gaining in-depth knowledge about black bears, can be learned, Hauserman said. What can’t be learned is passion and work ethic, both necessary to persevere in a job that requires 50-60 hours a week from May through October.
“If somebody comes in and they’re just average, if they have the passion they’re going to become top-notch,” Hauserman said. “With passion, that job is self-motivating.”
There’s not a specific orientation plan in place once they find a new director, as that will depend somewhat on what they bring to the table, Hauserman said. But she’s confident the board can marshal the resources to get them up to speed for the upcoming season.
“We have some board members that live close by, although they’re pretty busy,” she said. “Like always, we’ll somehow pull together and get it done.”
The online job postings set an application deadline of Feb. 1, but if they haven’t found the right candidate they’ll extend that date, Hauserman said. But they’re hoping to get a new director on board as soon as possible, and at the latest by mid-March when the activity really begins to pick up.
Hauserman invites anyone who may be interested, or knows of someone else who may be, to take a look at the complete job description at www.americanbear.org/get-involved/employment/. Information on how to apply is available there as well.