REGIONAL— Watch for rocks. That’s the best advice area marina operators can give right now as water levels have plunged in recent weeks to levels not seen in several years. It’s … 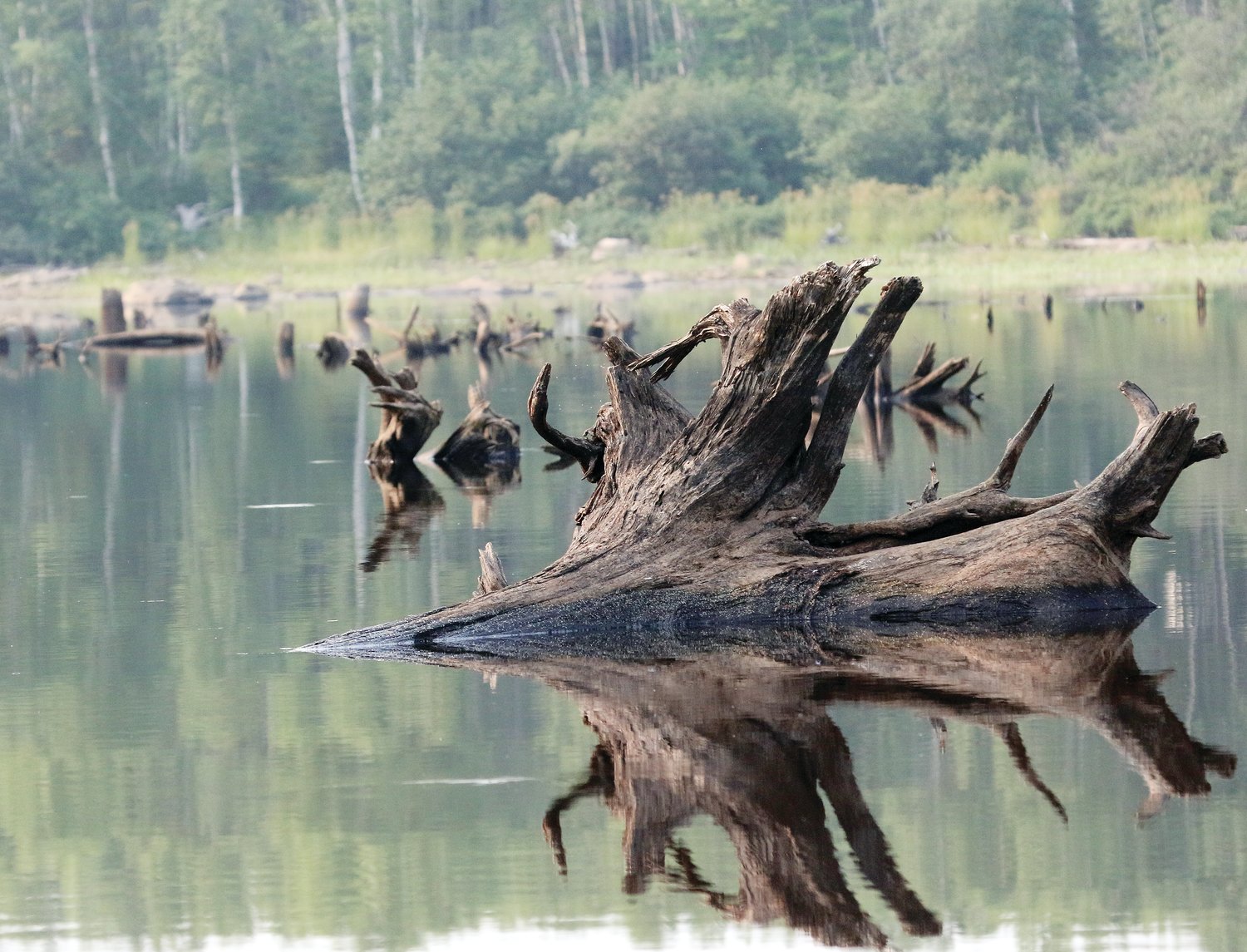 A ghost forest on the Pike River Flowage emerges from the depths as a result of low water levels.
M. Helmberger
Posted Wednesday, July 21, 2021 6:28 pm

REGIONAL— Watch for rocks. That’s the best advice area marina operators can give right now as water levels have plunged in recent weeks to levels not seen in several years. It’s been one of the hottest and driest summers in the region in more than a decade, and those conditions have been intensified by the flash drought that began impacting the area over the past month.
Since late June, most local weather stations have reported less than half an inch of rain, during a period when normal rainfall amounts to nearly an inch a week. Hotter than normal weather has only increased the evaporation of water from lakes and streams, while transpiration from struggling plants has left soils exceedingly dry.
“Every lake has a unique water budget, and that takes a lot of individual study and analysis,” said Sandy Fecht, the lake level Minnesota monitoring program coordinator and surface water hydrologist at the Department of Natural Resources, “but obviously precipitation is a very large factor.”
The region is currently in the midst of drought, which ranges from severe in much of northwestern St. Louis County, to moderate elsewhere. That’s according to the latest U.S. Drought Monitor map, published July 15.
The falling water levels have inconvenienced boaters, translating into an increase in prop repairs at places like Aronson Boat Works on Lake Vermilion, as even the experienced have struck rocks in unexpected places. “We’re even seeing mud trails when people leave,” said Gretchen Niemiste, who owns and operates the boat works with her husband John. The water is so low that some buoys placed by St. Louis County have toppled or drifted partially off the reefs or rock piles they’re meant to warn against.
It isn’t just lake levels that have been affected. Area rivers across the region are at some of the lowest levels in more than a decade. The Vermilion, Littlefork, Basswood, and Rainy rivers are all running well below their annual Q90, which means they’re around the fifth percentile or below for water flow. And for most area lakes and rivers, the lowest water levels typically aren’t seen until August or early September, at the end of the summer season. In other words, it could get worse before it gets better.
Locals on Lake Vermilion and its surrounding towns have taken notice.
“We have a beach where we had none before,” said Judy Sonnenberg, pointing to the area near her boat dock.
Though drought is natural to Minnesota’s weather patterns, extreme weather fluctuations are raising questions as to whether this is indicative of something bigger. “I do believe in global warming and I think that we’re in a crisis,” said John Aronson, who has lived in the Lake Vermilion area his entire life. “I think the whole planet is in a crisis right now, and things are changing,” Aronson said. He notes that the water level on Vermilion is down about 24 inches since the spring. “At the rate it’s evaporating, we’re really gonna be in trouble,” he predicted.
Climate change models actually point to a wetter Minnesota in the future. But DNR climatologist Luigi Romolo notes that the climate may simply become more variable, with really wet years interspersed with really dry years in the future. As to whether the current dry season, lasting from the previous summer to this summer, is pointing to climate change, it is still uncertain, said Romolo. “For me, to pin one specific drought on climate change would be difficult,” he said.
By themselves, fluctuations in water levels are natural and can actually benefit the aquatic ecosystem, notes Lee Frelich, director of the Center for Forest Ecology at the University of Minnesota. “That’s because there are some plant species that do really well with high water levels and others that do well with low water levels so if you have this fluctuation, it kind of maintains all the species.”
“I’m actually happy to see that we’re getting some fluctuation in water levels even though I know it’s not convenient for everyone. I just hope it’s not a sign that climate change is speeding up faster than we thought it would.” Frelich said.