A future for fisher?

REGIONAL— Wildlife researchers are hoping that a new project will better determine if the use of artificial nest boxes may be one way to help recover Minnesota’s fisher population, which has …

A future for fisher? 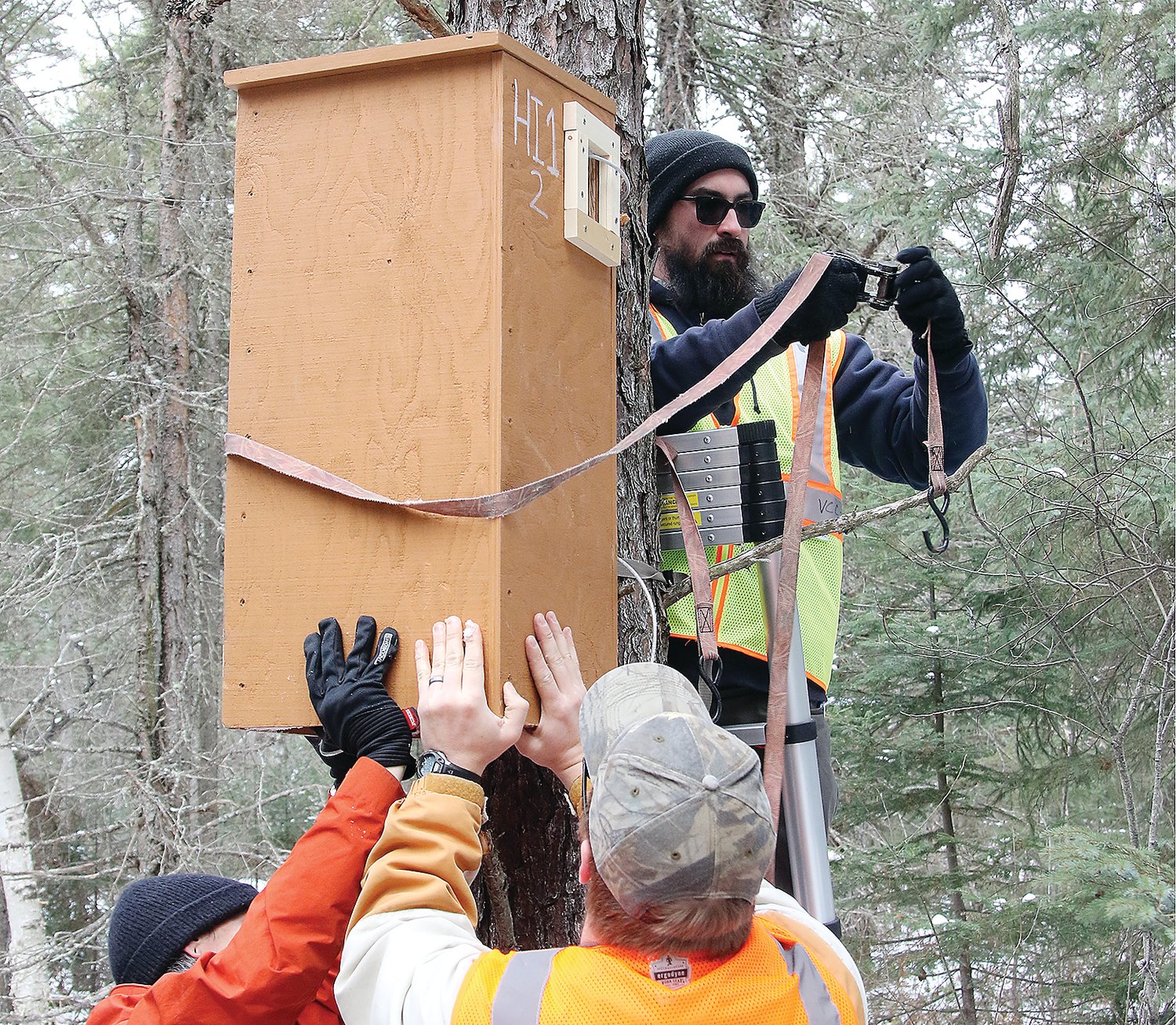 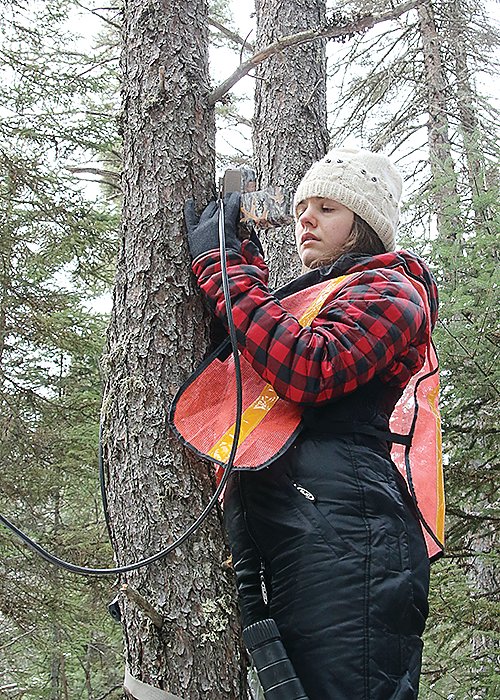 REGIONAL— Wildlife researchers are hoping that a new project will better determine if the use of artificial nest boxes may be one way to help recover Minnesota’s fisher population, which has declined sharply in recent years.

Biologists from the Natural Resources Research Institute, in Duluth, are leading the two-year study, funded by a $190,000 grant from the Legislative Citizens Commission on Minnesota Resources, or LCCMR. Vermilion Community College’s Forestry and Wildlife Club and the Hubachek Wilderness Research Center, in Ely, are among the participating partners in the project.

NRRI biologist Michael Joyce led a group of VCC students this past Friday to two sites on the Tomahawk, east of Babbitt, to install two more of the heavy-duty nest boxes in nearby forest.

Researchers will be monitoring use of the boxes for at least two years, and possibly up to five years, depending on how long they hold up. Researchers installed a dozen boxes elsewhere in northern Minnesota during a pilot study begun in early 2018 and have installed another 60 boxes so far in their expanded study. They have a few more dozen yet to install with a final goal of 110-120 boxes, according to Joyce.

Studies from elsewhere in North America have confirmed that fishers will use nest boxes for reproduction, but researchers here want to confirm that in Minnesota and learn more about whether the location of boxes and the types of surrounding habitat impacts whether fisher will use the boxes to raise their kits. “To me, that’s the first step, to see if they will use them,” said Joyce. “Then we need to figure out where they will use them.”

While fishers normally make use of natural tree cavities, many wildlife biologists are concerned that increasingly-intensive forest management in the state has been eliminating cavities large enough to accommodate fishers, which can measure 24-30 inches long, including their long bushy tail. They’re the second-largest member of the weasel family in North America, behind only the wolverine. According to the Department of Natural Resources, the fisher population in the state has declined by about half over the last 20 years.

An eight-year DNR study, concluded in 2015, identified the limited number of natural cavities as a possible factor that was limiting fisher reproductive success.

Fisher, due to their size, require old, large-diameter trees for their rearing dens. According to Joyce, fishers are typically using the largest two percent of trees found in the forest, and those trees are in increasingly short supply. And under the 40-60-year stand rotation schedule that the DNR is implementing on most of its forest lands, such trees are likely to become even rarer in the future.

If nest boxes can be used to supplement the number of natural cavities, they could help sustain fisher numbers in the future despite the changes in forest management. But first, researchers need to understand what locations fishers prefer and whether they’ll opt to den in the more marginal habitat that is likely to be available in the future. “If they’ll only use boxes located in old forests anyway, it won’t help much,” said Joyce.

The research includes a number of ways to detect whether fishers are using the boxes. For one, researchers install a trail camera directed toward the box entrance to monitor the comings and goings of all the wildlife that are making use of the boxes. They have also attached a sticky strip along the top portion of the entrance, which is designed to catch a few hairs as animals go in and out of the box. Those hairs can be identified either visually or through DNR analysis. The researchers are also installed a temperature sensor that will allow them to monitor temperature changes inside the box, which will indicate whether an animal is using it.

The boxes are heavy duty, built from a double layer of plywood sandwiching foam insulation, which will offer more thermal protection for the animals that utilize them. The nest box entrances are designed specifically to accommodate female fishers, which are significantly smaller than males, while excluding males. That offers the females and their young protection from the males, which can be aggressive during breeding periods. The researchers have reinforced the entrance holes with a third layer of dense hardwood in order to discourage red squirrels from enlarging the entrances.

Female fishers typically give birth to their young in March, and they often breed again within days of giving birth, said Joyce. “Female fishers are effectively pregnant year-round,” said Joyce. But the fertilized embryos are maintained in a kind of suspended animation for months, and only implant and begin to grow during the following winter. This unusual process, known as delayed implantation, is typical of members of the weasel family as well as bears.

While the nest boxes may provide useful denning sites in an absence of natural cavities, it remains unclear if they’ll help protect fishers from the threat of bobcats, which have been steadily increasing in numbers in northern Minnesota in recent years.

To date, the suggestion that bobcats are preying on fisher is mostly anecdotal. Trapping data does suggest that fisher numbers tend to be low when bobcat numbers are high. Joyce said that his fellow researchers hope to learn more about that connection through related research they hope to have funded by later this year. That research would involve GPS-collaring of both bobcat and fishers in order to learn more about how the two species might be interacting in the wild.