REGIONAL—Blistering heat. Freezing cold. Drought. Torrential rain. Hail.And that’s just some of the weather that the North Country has experienced in the past two weeks and it’s … 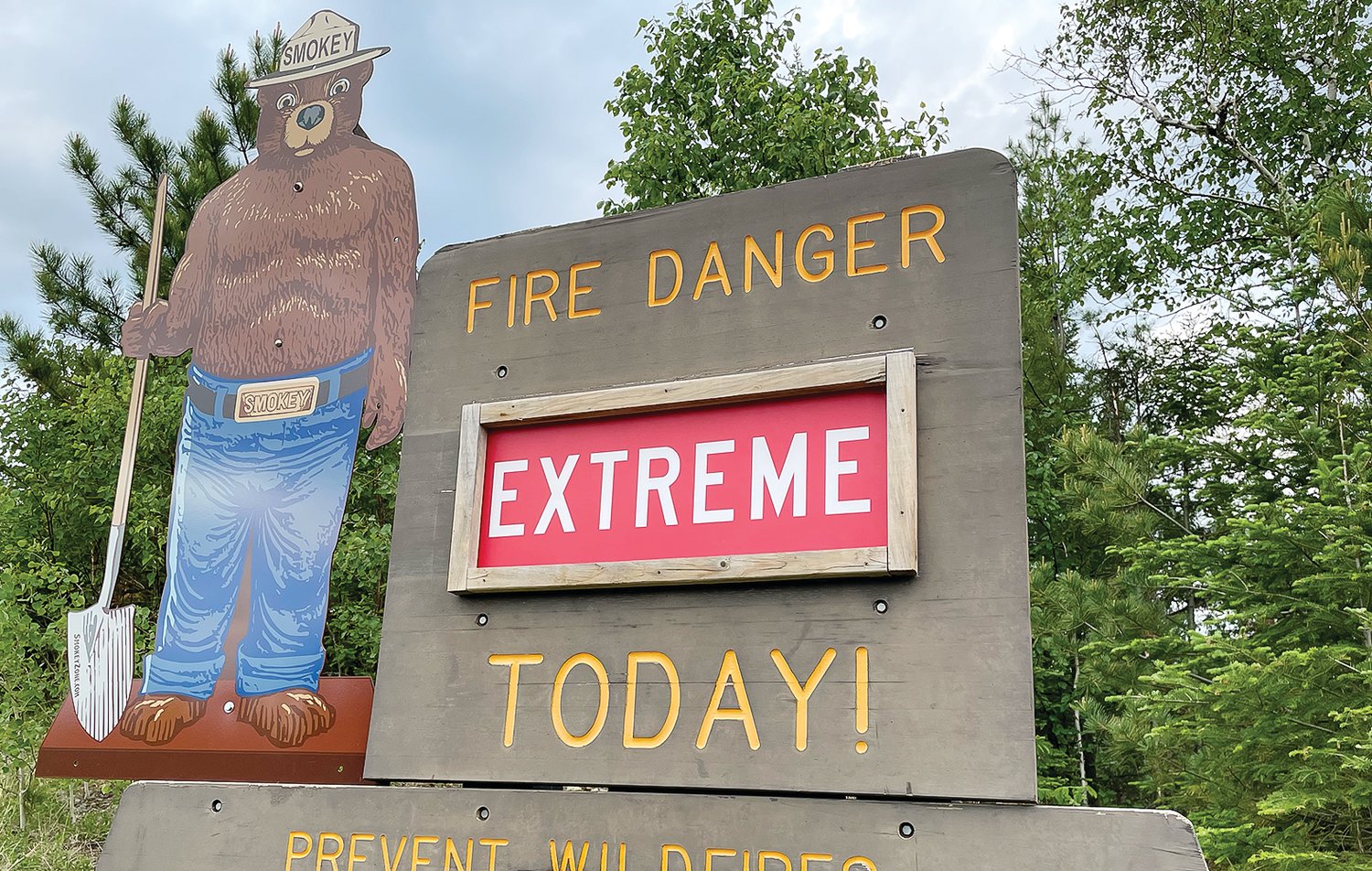 Smokey the Bear puts the word out about the fire danger that has been in place throughout most of the snow-free season so far this year. On and off rains have helped at times, but the overall trend has kept danger high, even during what is usually the coolest and wettest part of the summer.
M. Helmberger 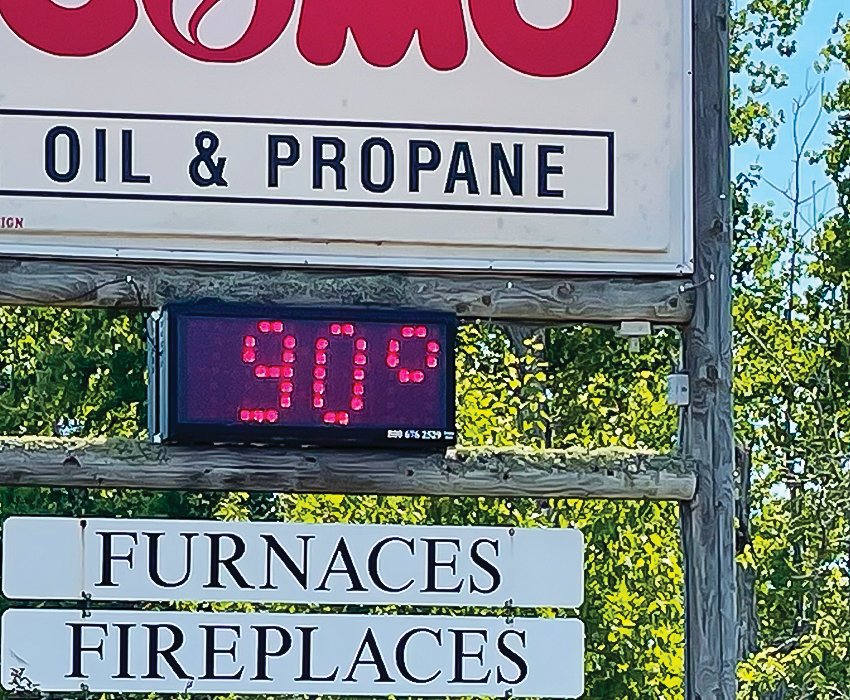 The Como Oil sign along Hwy. 169 flashes the temperature this past Saturday.
M. Helmberger 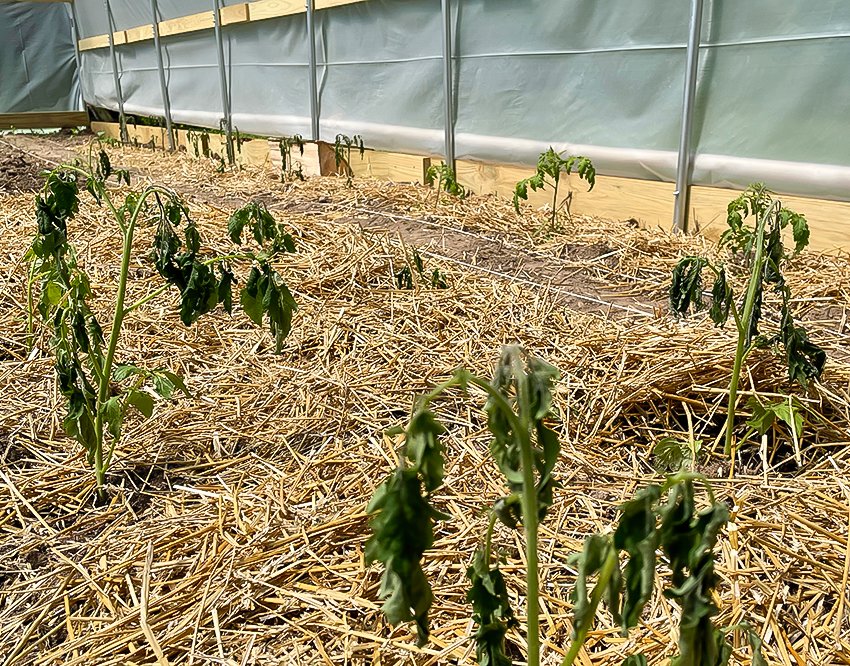 REGIONAL—Blistering heat. Freezing cold. Drought. Torrential rain. Hail.
And that’s just some of the weather that the North Country has experienced in the past two weeks and it’s been having repercussions across the region during what is normally a wet, cool, and largely sedate part of the summer.
Intense heat, dry air, and high winds have kept firefighters busy in recent days, mostly chasing lightning strike fires in the Boundary Waters Canoe Area Wilderness during some of the most dangerous fire weather in years. At least three small fires were reported over this past weekend, ranging from one-to-five acres. Fire crews from the U.S. Forest Service and Department of Natural Resources jumped quickly on reports of smoke, hitting the blazes hard with aerial water drops to head off fire growth.
While the Forest Service does occasionally allow natural fires to provide their benefits to the forest, fire spokesperson Tim Engrav said a couple factors have convinced fire officials on the Superior National Forest to act quickly to suppress any reported fires, at least for now. “A big part of the reason is the conditions we’re experiencing,” said Engrav. “Our typical fire season usually doesn’t come until July or August,” he said, noting that the resource demand for a potentially summer-long fire season would be substantial. And with much of the western United States in the grip of exceptional drought, the western fire season is predicted to be potentially catastrophic, further tapping the limited federal firefighting capacity. Engrav said planners don’t want to tie up staff for weeks at a time to monitor and slow natural fires.
One of the fires, dubbed the Hassel Lake Fire, was detected by Forest Service aerial reconnaissance this past weekend and had grown to about 12 acres by Monday, despite an aggressive response from the air. It’s located just north and west of Burntside Lake, near Ely, putting substantial private property value at potential risk were the fire to grow. An updated report on Tuesday noted that about half an inch of rain had fallen on the fire scene during Monday night’s thunderstorm, which fire officials hoped would allow them to begin to contain the fire. The fire is located in a remote portion of the wilderness, far from any travel routes.
The current conditions are highly unusual for June, which is normally the North Country’s wettest month, and often features cool weather. “I can’t say this hasn’t happened in June, but this does feel like more activity than normal this early in the season,” said Engrav. While the region does experience a spring fire season, it usually quiets down once things green up. “Things have greened up now,” said Engrav.
While the area has received spotty rains, it hasn’t been enough to keep fire danger in check for more than a day or two. Engrav said a number of fire danger criteria, such as the dryness of forest duff, have been reaching very high to extreme levels in recent days. Currently, fire danger, in general, ranges from very high to extreme around the area. The National Weather Service has issued three or four fire warnings in recent days for critical or near-critical fire danger, due to low humidity, high winds, and record warm temperatures.
A strong thunderstorm that ripped through the region early Tuesday morning helped bring temporary relief, along with hail for the second time in a week. Meanwhile, high temperatures and dry conditions are expected to return next week.
The recent hot weather is not just unusual, it’s unprecedented for the first week of June here in the North Country. “Never has it been so warm so early in June,” said state climatologist Pete Boulay this week. When it hit 98 degrees in International Falls late last week, it was the earliest in the year it ever reached such a temperature in the border city. Climatologists use I-Falls as a benchmark because it has one of the longest periods of record of any station in far northern Minnesota. “Early June is not typically a hot weather time,” said Boulay, who said the only Junes in recent memory that saw a similar string of 90-degree weather were in 1988 and 1995, both more than a quarter century ago. Boulay noted that many reporting stations in western Minnesota, including far northwestern Minnesota, have already reported temperatures of over 100 degrees. “It shouldn’t be this hot this early,” said Boulay. “We could be in for one heck of a summer.”
The hot temperatures came just days after a string of some of the coldest weather in years in the final days of May, when official temperatures reached the low 20s in many areas around the North Country and some unofficial readings dipped as low as the upper teens. The cold snap damaged many gardens, even though residents took steps to cover sensitive plants. Even some trees, like black ash and big-toothed aspen, both of which are sensitive to frost, had new leaves killed by the cold. Wild blueberry crops were also likely affected by the hard freeze, at a time when the plants were flowering.
Boulay said the wild gyrations in the weather may well continue, at least in northern Minnesota. Boulay said a frontal boundary has remained more or less stationary over the region in recent days. “That’s been separating the hot and dry from the hot and humid, like we’ve seen in the Cities. Boulay notes that such frontal boundaries tend to be active for storms. “They tend to move along the edge of the hot bubble. Right now, you’re sitting on the edge of the ring of fire.”
The current forecast calls for possible thunderstorms Thursday and Friday, with clear and dry conditions for the weekend. High temperatures are forecast to reach the upper 70s over the weekend, with heat building back in early next week. The average high for June 11 in the region is 72 degrees, with a normal low of 44.