Advantage goes to bear hunters in a season marked by drought

REGIONAL— Bear hunters in northeastern Minnesota can expect to have plenty of activity at their baits when the bear season opens next Wednesday, Sept. 1. The region’s intense drought has …

Advantage goes to bear hunters in a season marked by drought 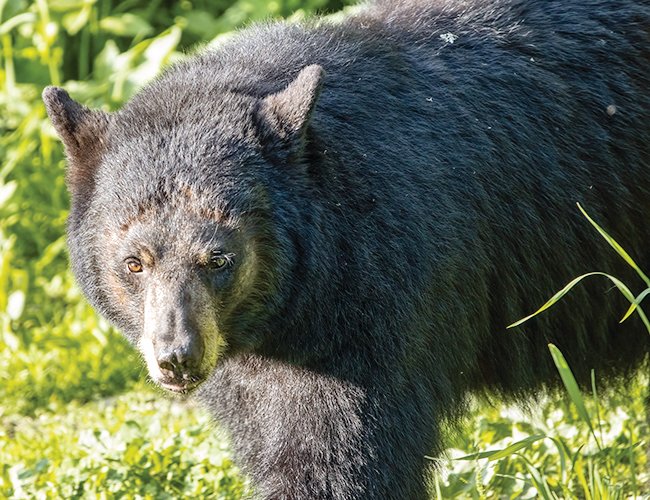 Black bears will be at a disadvantage this hunting season.
D. Colburn
Posted Wednesday, August 25, 2021 5:27 pm

REGIONAL— Bear hunters in northeastern Minnesota can expect to have plenty of activity at their baits when the bear season opens next Wednesday, Sept. 1. The region’s intense drought has withered most of the region’s natural bear foods for the second year in a row, and that is almost certain to increase bear interest in baits, according to Tower Area DNR wildlife manager Tom Rusch.
“Both the drought and the hard freeze on May 27 really took a toll on berries and brackens,” said Rusch, noting that young bracken ferns are another early season food for bears. “They really have had poor foods across the board,” he added.
The lack of wild foods has kept area bear guides busier than usual, as bears have been actively hitting bait stations as soon as they deliver their latest offerings. “We’re going to use twice as much bait as in the past,” said Dennis Udovich, of Greaney, who marks his 40th season as a bear guide this year. “When these bears come through, it’s like a vacuum cleaner. There’s nothing left.”
The lack of natural foods has been a problem all spring and summer, notes Rusch, which has prompted a significant increase in reports of nuisance activity. “My phone has not stopped ringing since they came out of the den,” he said.
The limited available food is almost certain to boost hunter success. Last year, another difficult food year led to an astonishing 57-percent success rate for hunters and Rusch predicts hunters could do at least that well this year.
While that might please hunters, another high harvest isn’t likely to help the bear population recover from its current estimated statewide population of 10,000-12,000 animals. That’s less than half of the population peak about 15 years ago, when the DNR estimated the state’s bear population at over 25,000.
Tough food years not only tend to boost the overall bear harvest, they also tend to increase the percentage of female bears in the harvest. While bear guides, like Udovich, strongly discourage hunters from shooting sows, distinguishing a female from a male can be difficult, particularly under low light conditions. “You don’t have antlers to make it easy,” said Udovich.
Last year, sows made up 45 percent of the harvest, which takes a whack at the bear population’s breeding potential, notes Rusch. “The percentage of females in the harvest has been higher than I’d like to see,” he said.
Since many female bears in the region don’t start breeding until age four, it means many of them never get the chance to reproduce, notes Rusch. “A lot of them aren’t making it that long,” he said.
The Timberjay should have first week bear results in the Sept. 10 edition.