REGIONAL— Hunters registered fewer deer in the North Country for the fourth year in a row, even as the buck harvest edged up slightly across the nine permit areas tracked by the Timberjay. As … 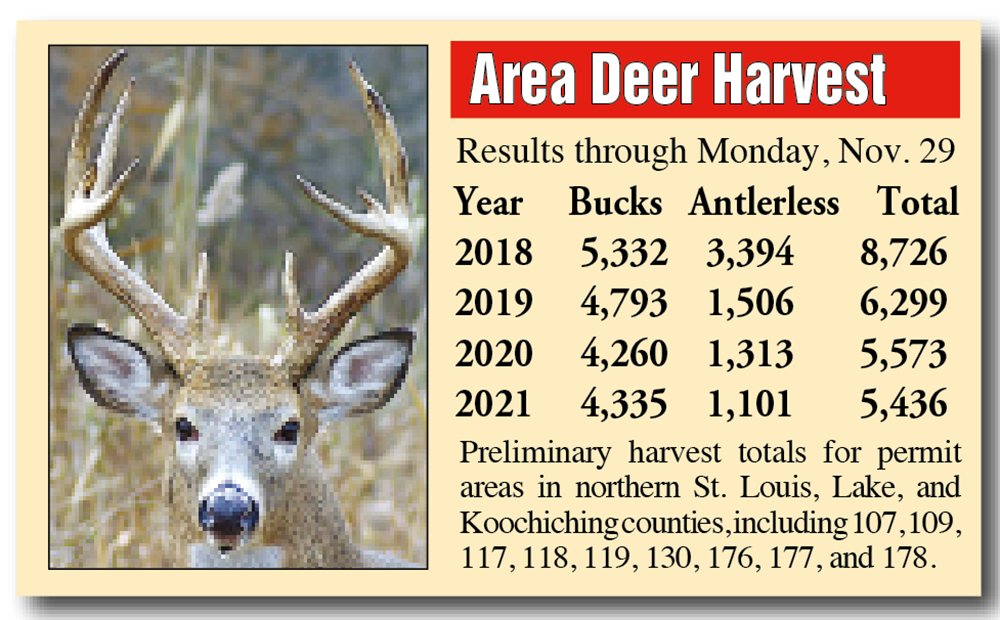 REGIONAL— Hunters registered fewer deer in the North Country for the fourth year in a row, even as the buck harvest edged up slightly across the nine permit areas tracked by the Timberjay. As of Monday, Nov. 29, hunters had registered 5,436 deer in those nine permit areas, down from 5,573 deer at the same period last year. This year’s area registrations are down a whopping 39.8 percent from the region’s most recent peak harvest, of 9,013 deer, set back in 2017.
The regular firearms deer season ended on Sunday, Nov. 21.
Surprisingly, border country permit areas saw the biggest gains in buck registrations, a development that offers a ray of hope for the future, according to area wildlife manager Penny Backman. According to DNR data, hunters registered 203 more bucks this year in permit areas 107,109, 117, 118, and 119, than last year— an 11.6 percent increase.
Backman said an increasing buck harvest is generally a sign of higher deer numbers overall. That’s an encouraging development for the border region permit areas, which had been showing little growth in deer numbers in recent years.
By contrast, the drop in deer registrations this year came from lower reported harvests in permit areas 176, 177, and 178, where the buck harvest dipped by five percent over last year. The overall harvest in those three permit areas was down almost ten percent, although that was most likely due to fewer antlerless permits.
Backman said weather conditions opening weekend, which were exceptionally warm, likely limited deer movement during the two days when hunters take the bulk of the year’s harvest.
Backman urged patience from hunters hoping for a rebound in the region’s deer population. She said it will take a series of milder-than-average winters to get back to the deer numbers the region saw after a string of mild winters in the early 2000s. “It’s going to be a long, slow process,” said Backman. “And a severe winter can be a big setback.”
It wasn’t just hunters in the northeast that struggled more than usual this year. According to the latest data from the DNR, hunters have registered 169,375 deer statewide. That’s well below the total of 197,315 deer registered last year. While more deer will be registered in the coming days during muzzleloader, archery, and other special hunts, those are unlikely to add enough to catch up to last year’s registration totals. The muzzleloader season ends Dec. 12, while the archery season ends Dec. 31.