Back from the brink

After decades of industrial abuse, the Rainy River has made a remarkable turnaround, according to new study

REGIONAL— A half century ago, biologists with the state of Minnesota were documenting a river that had been devastated by pollution. Before environmental regulations, wood fiber and toxic …

Back from the brink

After decades of industrial abuse, the Rainy River has made a remarkable turnaround, according to new study

Clouds at sunset reflect in the calm waters of the Rainy River. The river has made an extraordinay comeback in terms of water quality since the introduction of environmental regulations in the 1970s.
MPCA 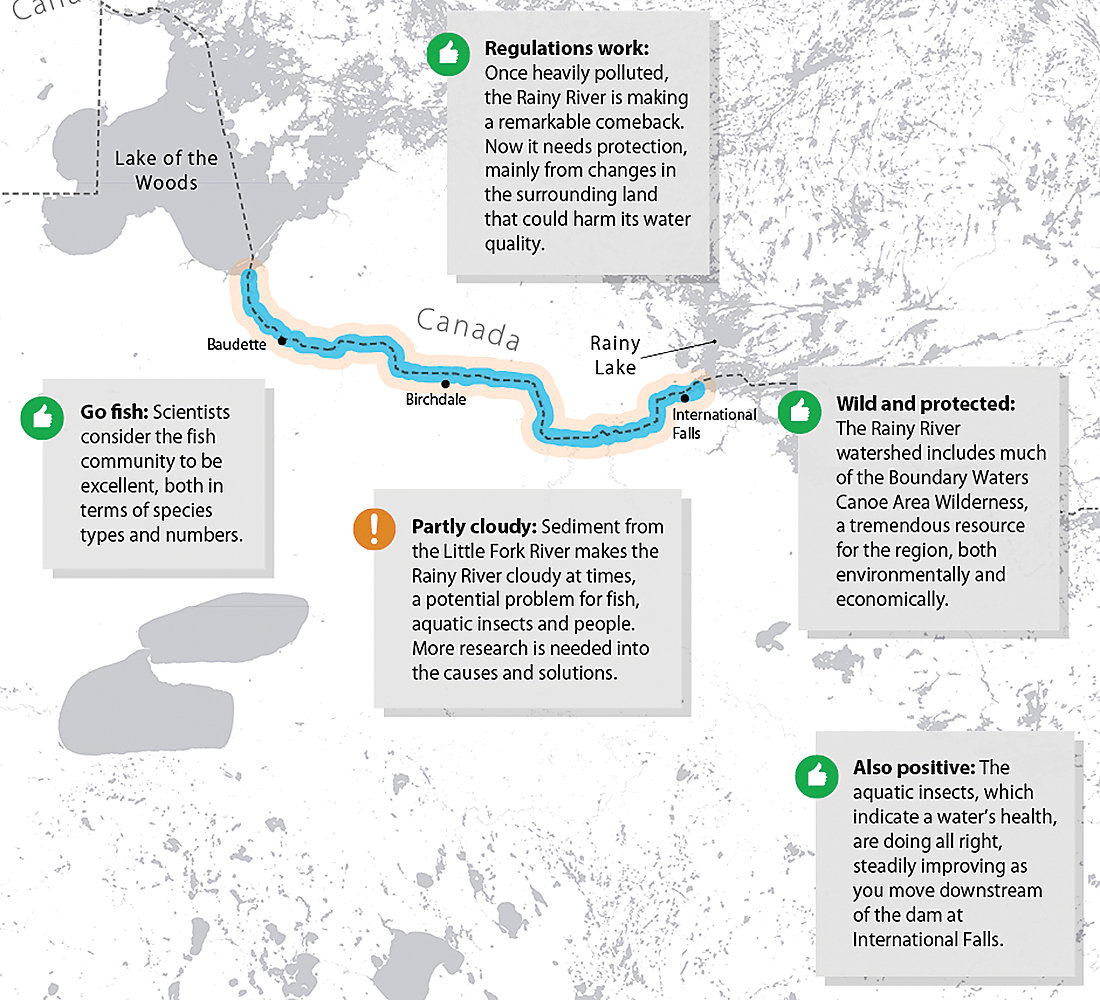 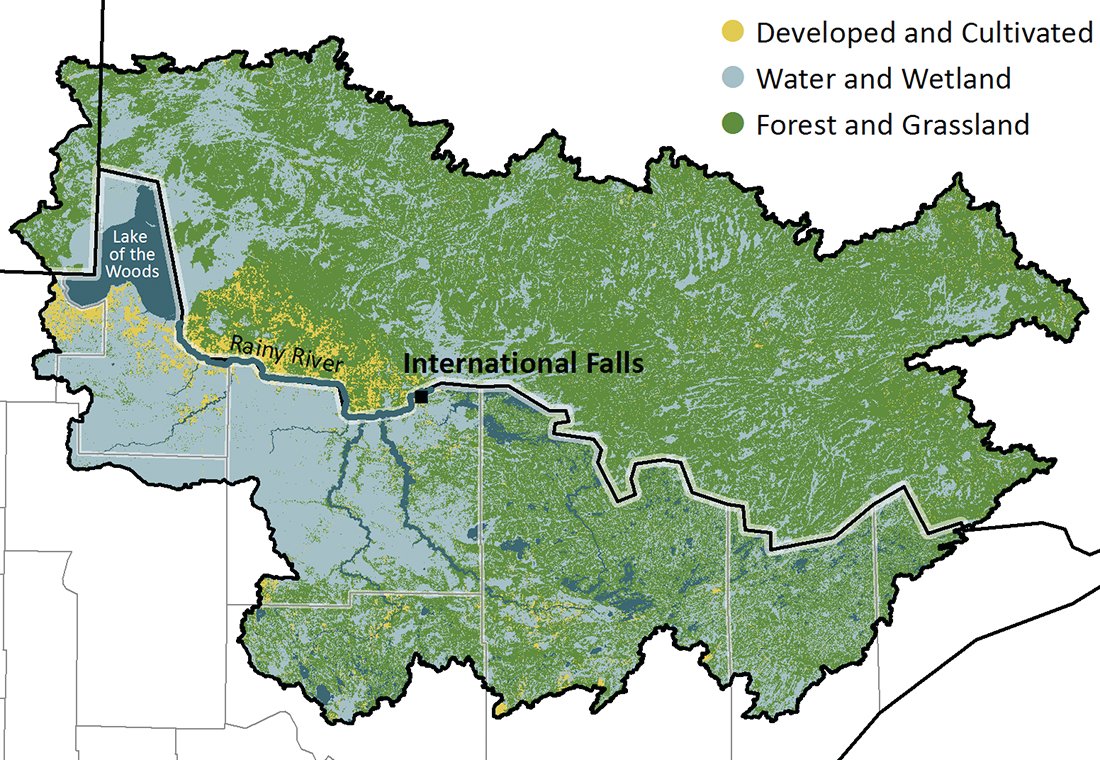 REGIONAL— A half century ago, biologists with the state of Minnesota were documenting a river that had been devastated by pollution. Before environmental regulations, wood fiber and toxic chemicals from the paper industry were choking the Rainy River from industrial sites at International Falls and Fort Frances built in the early 1900s. Those mills provided jobs and economic activity, but also fouled the water in countless ways.
In 1952, state researchers had to dig through three feet of wood waste simply to find the river’s water. In addition, raw sewage from the two border cities flowed virtually unchecked into the river. The industrial and municipal discharges fouled the water with sediment that made it cloudy, toxins that harmed recreation, and low oxygen levels that harmed fish and other creatures.
At the time, studies conducted on both sides of the border found the river’s condition unfit for swimming and a menace to public health and waterfront development. It was one of the worst examples in the state of industrial abuse of a public resource.
Yet, today, the Rainy River has experienced a remarkable turnaround, serving as a testament to the value of international partnerships and effective environmental regulation. In the 1960s, the International Joint Commission began to pressure communities along the river to clean up their act, helping to build political support for environmental protection. A few years later, passage of Canada’s Environmental Protection Act in 1971 and the U.S. passage of the Clean Water Act in 1972, created the regulatory framework for the river’s remarkable recovery. By the early 1980s, pollutants in the river had dropped dramatically and the river was on the road to recovery.
A new report, from the Minnesota Pollution Control Agency, notes that water quality in the river is now rated “good to excellent,” and supports a diverse and thriving fishing and recreation sector that benefits communities all along the river.
“The Rainy River is a vital economic and cultural bond between the United States and Canada,” says MPCA commissioner Laura Bishop. “With all partners working together — including federal, state, and local governments, Tribal Nations, industry, and environmental advocates — we have moved the river from near total destruction to one of the most treasured fishing spots in North America that is also integral to the health of economies on both sides of the border.”
A conduit between Rainy Lake and Lake of the Woods, the river forms part of the border between the United States and Canada. For more than 50 years, the two countries have collaborated to restore and protect water quality, important to the river life and the people who treasure it, as the river faces new potential threats from changes in land use.
World class fishery
While the conditions in the river were once toxic to many species, today the river supports a remarkably healthy and diverse fishery. The MPCA’s recent study documented 42 species of fish in the river, including ten that are considered sensitive to pollution, such as longnose dace, smallmouth bass, and sturgeon, which had been all but extinct in the river as a result of the decades of pollution. In recent years, the river has become a world-class fishery for both sturgeon and walleye, attracting thousands of anglers every year to communities along its route.
While fish are one indicator of the river’s health, the rivers many invertebrates, such as mayflies and dragonflies, are another sign of the exceptional water quality that has now returned. In fact, the Rainy River now supports some truly sensitive species, like finger-net caddisflies and common stoneflies, that have almost no tolerance for pollution.
Upstream protection a major factor
While clean water regulations helped to eliminate pollution discharges from industrial and municipal sources along the river, the Rainy has also benefitted from the quality of the water in upper reaches of the watershed. “A major reason for the excellent water quality in the river is the expanse of undeveloped land draining to it,” notes the MPCA’s recent study. That includes the 1.1 million-acre Boundary Waters Canoe Area Wilderness, Voyageurs National Park, and the 1.2 million-acre Quetico Provincial Park on the Canadian side of the border.
About 40 percent of the river’s watershed is within Minnesota, with the rest located across the border in northwestern Ontario. And continued protection of the watershed from development is critical to maintaining the Rainy’s exceptional water quality, according to the MPCA. “Any major changes in the land draining to the river, such as incentives to expand cropland on the Canadian side and proposals for mining on the U.S. side, will need careful consideration on how to protect the river from any negative impacts,” note the authors of the MPCA’s recent report.
Little Fork remains a concern
The one question mark in the Rainy River’s future comes from continuing water quality concerns in the Little Fork River. The Little Fork, which begins in the Lost Lake Swamp near Lake Vermilion and connects to the Rainy River downstream from Pelland, continues to carry a considerable amount of suspended sediment and algae-growing nutrients eroded from the river’s clay-dominated banks.
High levels of sediment can limit the ability of fish and other aquatic life to breathe, find food, and perform other life functions, and the inflow of water from the Little Fork does have an impact along portions of the Rainy River located downstream.
The Little Fork flows through a region that is still home to some agriculture, which can also impact water quality. As the Timberjay recently documented, at least one farmer in the Little Fork Valley continues to use the river as an open sewer, by dumping large amounts of livestock bedding straw and manure into the river.