Hunters on pace for biggest harvest in more than a decade

REGIONAL— Bear hunters in Minnesota are on a pace to harvest the highest number of bears in more than a decade, helped by dry conditions earlier in the summer that limited wild food production. …

Hunters on pace for biggest harvest in more than a decade 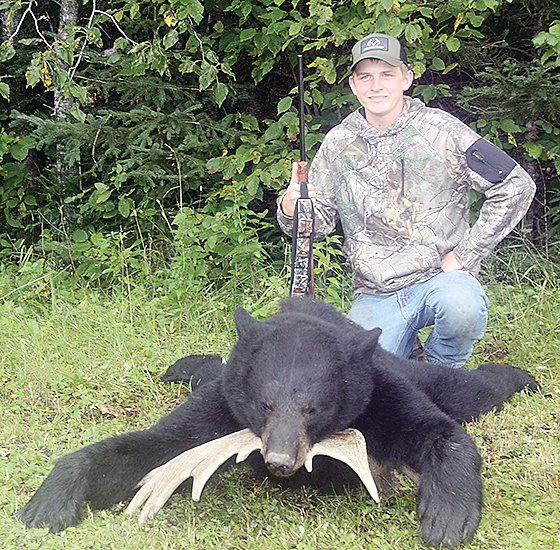 Sixteen-year-old Troy Ray poses with the 326-pound bear he shot during the first week of the 2020 bear hunt.
submitted
Posted Wednesday, September 9, 2020 4:48 pm

REGIONAL— Bear hunters in Minnesota are on a pace to harvest the highest number of bears in more than a decade, helped by dry conditions earlier in the summer that limited wild food production. As of Wednesday, the Department of Natural Resources was reporting 2,236 bear registrations.
The high harvest is falling heavier than usual on female bears, according to registration information compiled by the DNR. “In our area, we’re seeing 55 percent females,” said Tower Area Wildlife Manager Tom Rusch. “That’s sky high and from a population growth perspective, that’s not what you want to see.”
Hunters tend to take more female bears during years of natural food shortages. In better food years, they are more reluctant than males to utilize baits, which most hunters use to draw bears to their stands.
The season opened on Sept. 1 and the registrations were tallied through Sept. 9. While the season runs through Oct. 18, Rusch said hunters typically register about two-thirds of the harvest in the first week of the season. The harvest through the first nine days nearly surpasses last year’s total harvest of 2,340. Rusch said it now looks likely this year’s harvest will surpass 3,000 bears, which could well make it the highest take since 2007. Rusch said he expects hunter success to exceed 50 percent.
Those who utilized experienced guides likely did better than that. Indeed, ten of the 12 hunters who signed up for the hunt at Udovich Guide Service, harvested bears, according to longtime guide Dennis Udovich. “It was a pretty good season,” said Udovich, who noted that all of his hunters had multiple opportunities to see bears. “We had multiple bears on the baits, so I urged them to take their time,” he said. “One guy got to watch a female with three cubs.”
Udovich stresses the importance of harvesting only male bears and his hunters followed that guideline this year as well.
The youngest hunter of the season was a 16-year-old from Wisconsin, who attended Udovich’s bear camp with his father and two uncles, and they all went home with bears. The 16-year-old, Troy Ray, shot a 326-pound male. “We had three bears over 300 pounds,” said Udovich, including the largest, a 346-pounder.