Termination looms for those who fail to comply by Nov. 1 deadline

TOWER—The countdown is on for Fortune Bay Resort Casino, Bois Forte Tribal Government, and Bois Forte Business Development employees to get their first COVID-19 vaccine shots by Nov. 1. Those …

Termination looms for those who fail to comply by Nov. 1 deadline 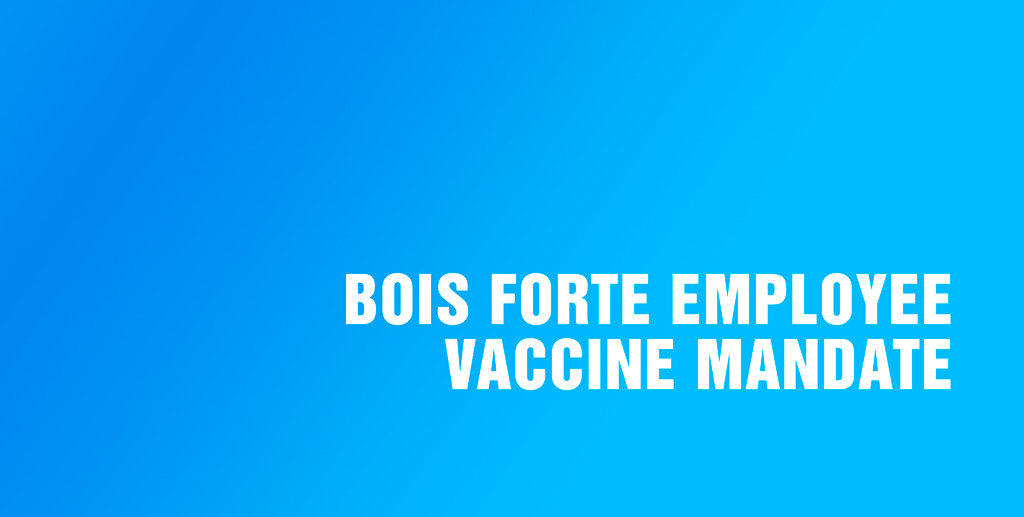 TOWER—The countdown is on for Fortune Bay Resort Casino, Bois Forte Tribal Government, and Bois Forte Business Development employees to get their first COVID-19 vaccine shots by Nov. 1. Those employees who do not get the vaccine will be terminated or they can resign from their positions.

The vaccine mandate was approved by the Bois Forte Tribal Council in late September amid great concern as a record 27 COVID-19 cases were reported in less than two weeks.

However, there could be some fallout with this order at Fortune Bay as there are currently 25-30 employees who have told their managers or directors that they will not be getting the vaccine.

“We know that there are employees out there that will not vaccinate and that is their choice as an individual,” said Bois Forte Tribal Chair Cathy Chavers. “But we’re doing this to help keep our community safe.”

“It’s alarming,” said Chavers at a recent meeting. “We have to protect our communities in both Nett Lake and Lake Vermilion. We want everyone to respect our wishes and to take steps to turn around the disturbing trend we’re seeing with this pandemic. I wish it would just go away, but that’s not going to be happening anytime soon.”

Chavers noted that Native Americans are at higher risk of being admitted to the ICU or dying from COVID-19 as opposed to non-Natives.

“The numbers of those who said they will not get vaccinated have dropped, but any loss of staff will be tough to deal with,” said Deegan. “We’ll assess the numbers again next week and see if we’ll have to alter our hours of operation. Hopefully, we won’t have to make that decision, but we also have to be realistic.”

Employees will be allowed to request exemptions for medical and religious reasons, and Fortune Bay’s Human Resources Department is working with its legal counsel for guidance in reviewing these requests. A similar scenario is playing out for Bois Forte Development Corporation employees and those employed at the Tribal Government.

The staff has already been stretched thin for many departments since Fortune Bay reopened June 1, 2020, after it ceased operations that March due to COVID-19. That means many employees were asked to do more, which has led to sagging employee morale and a tired staff that just couldn’t keep up. Eventually, some amenities were forced to go with reduced hours of operation, which meant staff would field many complaints from guests asking why that was. However, this scenario played out across the Iron Range, region, state, and nation.

“These are certainly trying times,” said Director of Human Resources Beth Adams. “Vaccine mandates have been imposed at several larger companies and as one of the largest employers on the Iron Range, we are not excluded from having to make hard decisions like this.”

Adams said that as of Wednesday, she was aware of five religious exemption requests and one medical request. The latter includes exemptions due to allergic reactions to vaccines in general, physical condition, or other medical circumstances. The religious exemption is not as cut and dried.

“Our attorney did some research and provided us with guidelines for reviewing religious requests and stipulated what should be included and what shouldn’t be considered,” said Adams.

In the meantime, those who do want to get vaccinated will have several chances to do so during October as the Bois Forte Mobile Vaccine Unit will be on-site at Fortune Bay to have staff administer the first dose. Several employees received their first vaccination on Wednesday, Oct. 13. The remaining dates are Thursday, Oct. 21 and Wednesday, Oct. 27.

Depending on the type of vaccine received, the second dose will be administered one month after the employee receives the first dose. No more than a couple of employees from one department would be scheduled on the same day in case of any adverse side effects from the vaccine to ensure departments are adequately staffed.

Meanwhile, Fortune Bay directors will continue to closely gauge the departments that may be impacted by employees who are not planning to get vaccinated.

Adams said Fortune Bay employees will have until Monday, Oct. 18 to submit their resignation letters. This will help the management team know where departments will stand come Nov. 1.

“We will be reviewing the list of employees who are on the vaccinated list and have not given notice of their resignation and terminating those individuals for misconduct (failure to follow company policy) on Nov. 1,” said Adams. “We’d prefer notice and that employee records reflect resignations with notice rather than misconduct.”

Adams said these are not easy decisions to make but added that management has to follow the directives of the Tribal Council.

“They, too, have tough decisions to make,” said Adams. “As Chairwoman Chavers said, we all thought we’d be done with this pandemic by now, but unfortunately no one knows when we’ll get back to a sense of normalcy.”

Moratorium set on sale of cannabinoids