REGIONAL- New positive COVID-19 cases were identified across the North Country last week, and state officials warned that key indicators are headed in the wrong direction going into the holiday … 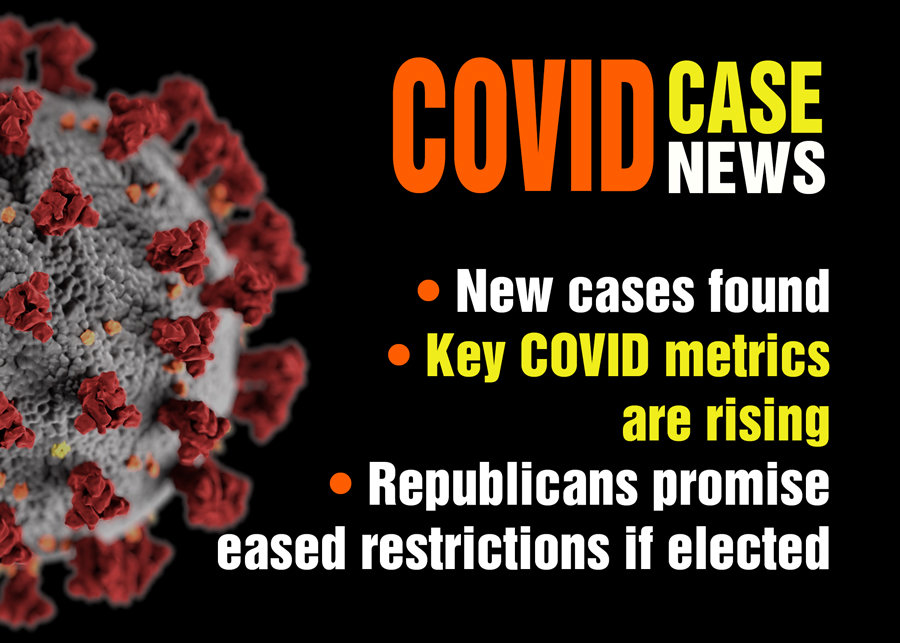 REGIONAL- New positive COVID-19 cases were identified across the North Country last week, and state officials warned that key indicators are headed in the wrong direction going into the holiday season.
Bois Forte health officials announced that three new cases had been identified at Nett Lake. Cases involving an individual in their 60s and another in their 30s were identified on Oct. 12, and a third individual in their 40s tested positive on Oct. 15. All three individuals are in isolation.
“Bois Forte Health will maintain regular contact with the isolated individuals and will monitor their compliance with isolation instructions,” said a press release on the tribe’s website. “Bois Forte Health is engaged in contact tracing and will follow up with those suspected of having recent contact with the individuals who tested positive. Finally, the Band is coordinating with the Minnesota Department of Health regarding positive cases on-Reservation to ensure a robust and thorough public health response.”
Fortune Bay Resort Casino General Manager Jenna Lehti confirmed in a Monday email to staff that two employees tested positive for COVID-19 last week.
“One employee hasn’t worked in a week, and therefore has not exposed anyone at work,” Lehti said. “The second employee, after reviewing surveillance footage, also did not expose anyone at work. Please remember the Minnesota Department of Health defines “exposure” as within 6 feet of another person for longer than 15 minutes.”
No guests came into close contact with the affected individuals. Lehti commended the staff for maintain social distance, which she credited with keeping the number of exposed employees to a minimum. She also asked staff to increase sanitation for commonly used workplaces and equipment.
Tower-Soudan Elementary School became the second ISD 2142 school to have a positive COVID-19 case. After hearing about a possible case on Monday from a parent at the school who said they had not been notified about it, the Timberjay contacted Superintendent Reggie Engebritson, who confirmed that a case was identified last week.
“I assessed the situation, did the contact tracing, and there were no close contacts,” Engebritson said. “The person had not been in school since Monday, Oct. 12.”
Engebritson said she sent out a notification through the district’s alert system, and that she received responses confirming that she had already notified families and staff. But at least two parents of Tower-Soudan Elementary students said they had not received a notification. A belated notification via the campus messenger system, sent out Oct. 19, apologized for the delay in getting the message out to families and staff. “For some reason I thought I had sent it out,” Engebritson said.
Engebritson also serves as superintendent for the Mt. Iron-Buhl school district, which shifted on Monday to all distance-learning for two weeks in response to COVID-19 cases.
The bi-weekly case rate per 10,000 that is used to guide school decision-making about learning models remained elevated last Thursday, with the overall county rate at 28.5. The number for St. Louis County outside of the Duluth area dropped from 19.7 to 18.2, still well above the threshold for districts to consider shifting from in-person learning to a hybrid model incorporating distance learning for upper grade levels. It’s the sixth consecutive weekly rate over the threshold of 10, but districts work with health and education officials to use local data to determine if a shift is recommended.
Conflicting views
State health officials reinforced in a Monday press conference that the number of positive COVID-19 tests havsincreased faster than the number of tests administered, a clear indication the coronavirus continues to circulate widely in communities.
The seven-day positive case average, which lags by a week, is currently 5.8 percent. That is an increase from 4.9 percent the week prior. The state generally says a 5 percent rate or above is a concerning sign of disease spread.
Tuesday marked the 11th consecutive day the state reported more than 1,000 new cases.
“For the first time now we’re seeing faster growth in cases than in testing,” health commissioner Jan Malcom said. “We are seeing hospitalizations increase, we are seeing mortality rates increase. We are going deeper into the fall and the holiday season with a far higher level of cases than we had hoped, because we know what comes next.”
Malcolm told reporters that with the pandemic currently escalating in Minnesota, they would “not recommend further increasing gatherings of people.”
“All of these indicators are going in the wrong direction, which to us does not indicate that it’s time to relax our cautions,” she said.
However, at the state capitol in St. Paul, Republican lawmakers delivered quite the opposite message at an “OpenUP MN” press conference.
Senate Majority Leader Paul Gazelka (R-East Gull Lake) and House Minority Leader Kurt Daudt (R-Crown) released a joint statement promising voters that if they return control of the Legislature to their party they will take steps to lift restrictions on businesses and schools imposed by Gov. Tim Walz.
The GOP plan includes implementing more in-person learning at K-12 schools, resuming all school sports, and allowing local districts to decide whether to have fans at games. It also includes lifting restrictions on how many people can worship at religious ceremonies, as well as ending broad public health rules on bars and restaurants.
“We trust Minnesota families, schools, churches, and businesses to be responsible and live safely,” says the statement. “Instead of concentrating power in one person or at the state level, we will return it to Minnesotans and the local leaders they elected.”
All 201 legislative seats are on the ballot this year. The House currently has a 75-59 Democratic majority while Republicans hold a 35-32 advantage in the Senate.
MinnPost contributed to this article.