Devil in the brush

I reacted with alarm back in July the first time I noticed my winter squash plants had been browsed. Like many backyard gardeners, winter squash is my pride and joy, a delicious fruit that is a …

Devil in the brush 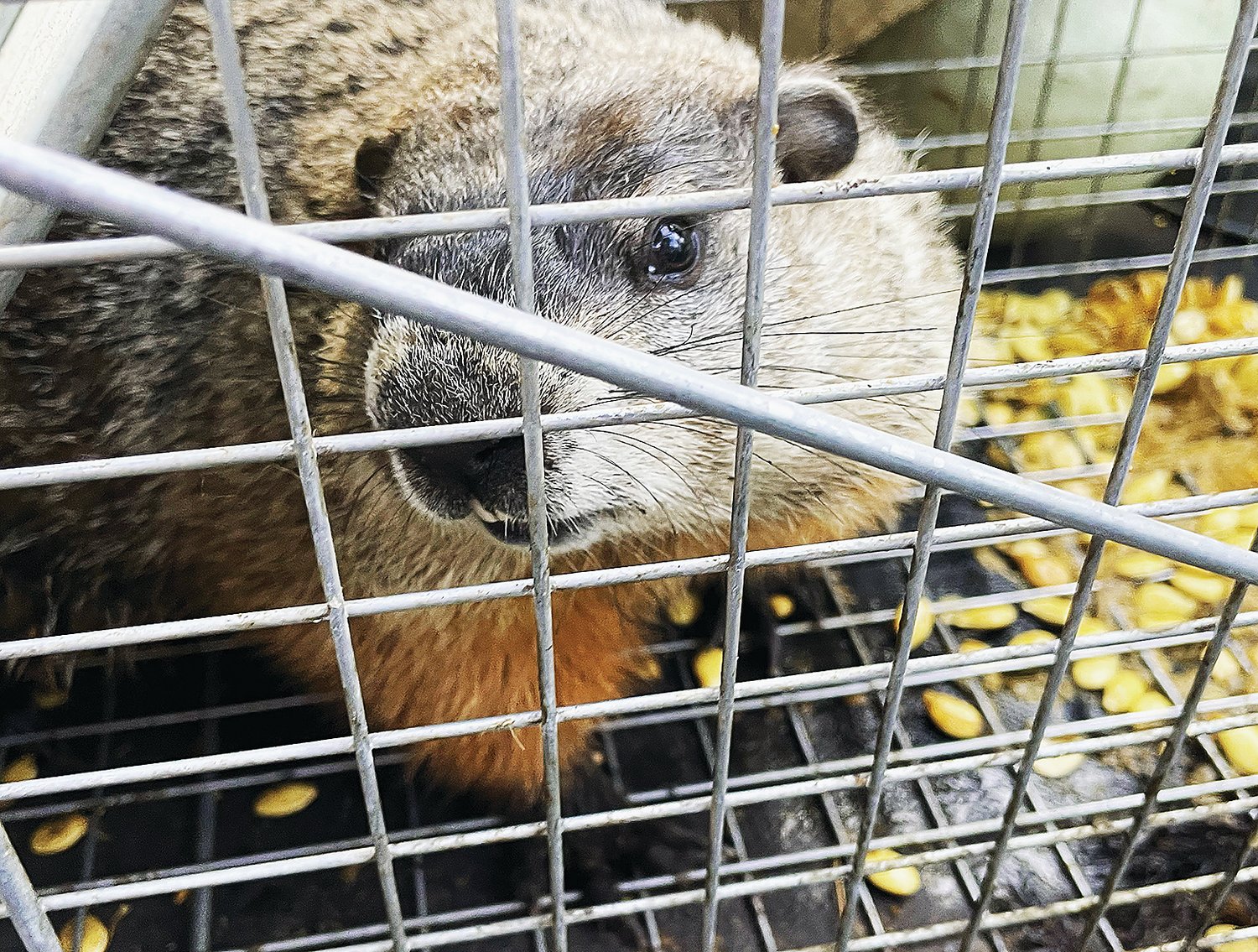 A trapped woodchuck looks into the camera of the trapper before being relocated to a distant gravel pit.
M. Helmberger
Posted Wednesday, August 25, 2021 5:29 pm

I reacted with alarm back in July the first time I noticed my winter squash plants had been browsed. Like many backyard gardeners, winter squash is my pride and joy, a delicious fruit that is a staple in our household throughout the winter and often right into the following spring.
I tend my winter squash like a mother hen. It’s usually my first stop in morning after waking up, when I check for the newly-opened female flowers, which I typically hand pollinate. I’m out there morning and evening, making sure they have enough moisture and watching the progress on the developing fruits. Because we’re high up on a ridge, we usually miss the first frosts of the fall, which means I can almost always bring even butternuts, a notably long-season squash, to maturity.
In a normal fall, we sock away several bins worth of squash, secure in the knowledge we’ll have months of good eating.
So, when my garden invader moved from nibbling my squash plants to devouring my actual squash, I was, understandably, in full panic mode. Not knowing what exactly I was dealing with, I went into deer mode, and quickly erected my electric fence. It made no difference. In the meantime, whatever it was had apparently decided that it really, really liked squash.
I put up chicken wire and other fencing material I had stashed away over the years all around my squash, figuring that might be enough to keep a hare at bay. I sprayed my squash to the point of dripping with deer and rabbit repellent. And still, each day, when I would come home from the office, another burgeoning squash fruit would have been reduced to a stem and a pile of seeds. My delicious kabocha squash, so dry and nutty, that cook up with the finest squash texture, were being devoured along with good portions of the plants. Then, the hopi gray squash started disappearing, and yet I had never been able to spot the creature who was destroying my garden. I put out a trail cam on several occasions, wanting to confirm that I was dealing with a mere animal, and not some evil spirit vexing me, yet I could never capture an image. My garden, for so many years the place I am most at peace, became a place I almost feared to venture if only to avoid another stabbing disappointment.
I had a pretty good idea that whatever was raiding my garden lived underneath a brush pile off the edge of the driveway, which had become the repository of about three years-worth of brush and tree branches. I was tempted to light the thing on fire, but then I didn’t think it was worth burning the entire township up over some lost squash, even if they were kabochas.
I had also concluded by this time that my perpetrator was a woodchuck, since I had never experienced such depredation from one of our neighborhood snowshoe hares before and the process of elimination left it as the most likely alternative.
I thought about sitting out with a rifle, but I had no idea when this nasty critter emerged from its lair under the brush pile and I really, literally, didn’t have the time to sit in the yard all day. Finally, Jodi suggested borrowing a live trap from our friends Chuck and Mickey, which sounded at least like a workable solution. So, I asked Chuck, a squash grower himself, who instantly understood my agony. He had Mickey deliver their big Havahart trap to the office the following day.
I deployed it with high hopes, using a partially devoured squash as bait, only to come home to an empty trap and a new destroyed squash two days in a row. In desperation, I covered my remaining squash with fencing, buckets, straw, or anything else I could find to try to protect the fruits.
Finally, on the third day, I came home, and the trap had been tripped. And there, inside, was my garden devil, a woodchuck who seemed not the least bit ashamed of himself. Even from inside his tiny prison, he wanted it known he was ready to take me on. And he had clearly fortified himself. Rather than getting worked up being caught in a trap, the critter decided, “hey, I might as well eat,” and devoured the entire squash, other than the seeds and the guts. It had probably eaten at least a third of its body weight by the time I got home.
I can’t tell you the relief that washed over me. Yes, half of our squash crop is gone and many of the plants were damaged to the point they won’t produce a single fruit, but at least my perpetrator had been caught. I drove him to a gravel pit about three and half miles west of our house and let him go, or at least tried to let him go. The animal had apparently eaten so much it could barely move. I eventually got him out of the trap and he waddled off to his next adventure while I went home to tend to my squash.
Next year, we’re installing a fence.